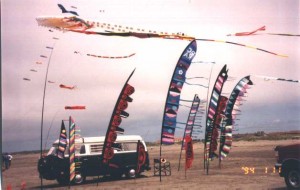 I met Miriam Schafler at the 1997 OKR Retreat and as we kept meeting at various festivals, a plan emerged. We would drive to Junction in 1998, camping in her tent trailer in inexpensive campgrounds. Back from Australia only ten days, I packed up and drove from Vancouver Island to Eugene, Oregon to start the epic journey. We loaded her van with sewing machines, kites, banner poles, personal stuff, 150 brownies, about a dozen huge bottles of champagne and quarts of peaches.

Off we went to San Francisco, Miriam’s former home turf, where she had planned to mount a two person (Miriam and me) mini kite festival on a local beach for her friends. They had been invited to participate and celebrate her birthday….the reason for all the champagne and brownies and peaches! It was a wonderful windy day, and the two of us put on a pretty impressive show, much to the pleasure of the rest of the beach goers. We did banners, arches, kites, champagne with peaches and brownies, and nearly dropped dead of exhaustion.

However, we were up and out early the next day, heading East. Our first stop Death Valley. I loved traveling with Miriam. She had tons of maps and information from AAA routes all mapped out that we didn’t follow. We had a casual attitude about going anywhere in a direct, efficient way, preferring the secondary scenic routes to Las Vegas – where we LOST our campground one night – and then on to Albuquerque – where we couldn’t FIND our campground, even with the sheriff’s help!

We paused there to hike around Pueblos and Anasazi ruins and fly a few kites for a day, and then took various back roads down to Roswell to check out ‘other’ flying objects – (UFO’s). We then headed out onto the never-ending flatness of the Texas oil fields, finally arriving in Junction midday Friday.

We could see sky stuff from afar and pulled into the Junction Centre to welcoming kites and kitefliers.

We checked in, and after dinner we attended our first workshops. I took Willie Koch’s workshop on his ‘woven’ kite, and despite my past experiences of packing it in from frustration during a sewing workshop, I found myself working at a reasonable pace, and was able to finish my kite that evening.

With the addition of a looooong tube tail, it has proven to be a great flyer! Feeling like a pre-schooler, Miriam attended Robert Trepanier’s “Mixing Color for Fun” and slopped paint with gay abandon in the creation of her kite. Saturday’s workshops didn’t start till the afternoon, so there was time to visit other workshops, fly kites, and just sit around and talk. Betty had announced at dinner the previous evening that this was to be the last Junction workshop, and that she and Bill were actually going to really retire. There was much nostalgia, and sadness, and talk by some Texans of maybe coming west to some of our west coast workshop weekends. Saturday afternoon I attended Lisa Schirmir’s Design. I realized that it was going to be a serious and complicated process. Creative production is, for me, like sex: I don’t perform in front of others. So I worked out my design on paper, and decided to complete it at home. Miriam dedicated herself to finishing her banner, the only workshop participant to do so. Watch for her magnificent banner this summer!

Saturday night Bill Lockhart put together a slide show of slides brought by participants. The subject was ‘kites or kitemakers who have influenced me’.

It was amazing to see how many kitemakers had been influenced by the work of Peter Malinski. When we arrived for the slides, we were all seated at tables that corresponded with the number of years we had attended Junction. Then Betty supervised a ‘gift giving’ to everyone, ranging from badges for one and two year participants, to badges, sweatshirts and a Bill Lockhart patchwork kite for those who had attended all ten years! We also all got a bubble blower!!

Sunday workshop was with my favorite teacher, Robert Trepanier (and not because he is Canadian) We cut five rectangular interlocking shapes out of Japanese paper, and then each person created their own kite concept, using fine bamboo. Amazing asymmetrical shapes emerged, were bridled and flew! Miriam attended a miniature kite workshop being given by Scott Hampton, who was standing in at the last minute for Dan Kurahashi, who had had to cancel because of his mother’s death. Her classmates came away with a variety of miniatures, including a miniature Cody! Sunday’s dinner was a Texas bbq, complete with nose flute serenade. While many sat up till the wee hours talking and bull shitting etc., I found myself exhausted at the end of the day, and crashed early.

Monday, our last day, I attended Dan Proebstel’s workshop while Miriam attended Jose Sainz’s. The afternoon was spent finishing up projects, and after dinner we all went on a grand adventure to a Texas ‘sinkhole’ which was inhabited by zillions of bats that emerged to hunt for food at sunset. The bat show was accompanied by a magnificent sunset. The next morning, people were up and leaving. By lunch time we had it all together, and said our goodbyes, heading homeward by way of the Carlsbad Caverns, Phoenix, Arcosanti, Jerome, Sedona, Navajo country, Bryce Canyon, Coral Sands and Provo, Utah, Sundance, and finally Miriam’s wonderful property on the mesas of central Oregon’s desert country.

Fortunately Miriam and I were in no hurry, so as a result we considered the whole trip an adventure. We both drove, sharing maybe two or three long, hard driving days. But that was our choice. We did not like the main highways (marked in red on our AAA maps) because of the truckers and speed.

We tended to plot our route on ‘black’ or ‘gray’ roads that were marked with little black dots that signified scenic routes. The roads were all excellent two lane, barely used roads with NO trucks, and few motor homes. We camped in RV parks or in state and national parks. We visited pueblos, hiked, saw wonderful desert spring blooms, enjoyed glorious sunrises and sunsets, went through mountains, deserts, canyons, etc. The whole trip, including the time spent at Junction lasted three unstressed weeks….well there always was a bit of stress when we got lost, which we did once in a while, or when the trailer got a flat tire, or when the Thousand Trails campsite where we had planned to spend three luxurious days had a breakdown in the water pump, and there was no water, no toilets, no swimming in the pool, and no laundry facilities. But because we didn’t have to tie ourselves to any time constraints, we enjoyed it and came home from Texas Junction with some wonderful kites.

For those heading East to West: Reflections on Ocean Shores

I stopped in Eugene long enough to transfer junk from one vehicle to another, and headed off to Portland, Oregon in my VW van. I tried calling kite friends John and Marzlie Freeman to let them know I was on my way, but they were busy on the ‘Net, and I couldn’t get through. I arrived after they were in bed, so I just flipped up my camper and crashed, much to their surprise when they found me parked out front in the morning. I headed out again, destination Ocean Shores Washington for the North Coast Sky Painters International Festival, which opens the flying season here on the West coast.

The weather was not so great, but it wasn’t raining, so I pulled into Ocean Shores just in time to enter a few of the fun competitions they hold on Friday. The city and Park people had apparently had some disagreement over beach access for the festival. Last year it was wonderful, everyone was allowed to drive on. The beach is very wide, and hard enough packed to be classified as a road, however for reasons unknown to me, they told the festival organizers that the beach would only be accessible to vehicles belonging to registered festival participants. They also limited where we could enter the beach, and as a result, the festival was spread out over nearly a mile. It gave everyone lots of room to fly, but definitely put a crimp on schmoozing and visiting. It was LONG haul down the beach from the single line venue to where the stunt competitions were being held and unfortunately I never made it. Last year I packed my bike on the car to negotiate beach travel, and will do so again in the future.

Since the AKA is to be held in Ocean Shores, I thought I’d share a few thoughts on the venue. Ocean Shores is a funny little town. The story goes that the land was bought up and developed by gambling interests, who thought Washington was going to open up and allow casinos. It didn’t happen. So they unloaded the town on Pat Boone (honest!), who loved the area, and moved his family there. They kind of grew out of all the isolated bucolic beauty, and moved on and what you have left is the strangest little ‘new’ town I have ever seen.

There are lots of very nice, new resorts and hotels and motels spread along a magnificent beach, but because land was cheap, there are HUGE spaces between them. One gets the overwhelming feeling of LOTs of space. The roads are all  8 lanes wide (HONEST), with a boulevard down the middle. Don’t ask why. The shops are all scattered all along these roads, and it is a good thing they rent bikes, horses and all kinds of dune traveling equipment, cos you are going to need it. Be prepared for a lot of walking.

The shops are less than exciting and are full of your run of the mill tourist stuff. There are several good kite stores, so there will always be a place to spend your money, but don’t expect gourmet restaurants. The nearest town of any note is Aberdeen, a fair drive away.

On the plus side, the beach is fantastically wide, and both times I have been there, the wind good . The laws restricting driving on the beach won’t be in effect after Labour Day, so we will be able to park our vehicles right on the beach, which is really nice – especially if you know one of those west coasters who drive motor homes which they park on the beach! They make a nice bathroom and/or windbreak retreats for a beer or a cup of coffee! Hopefully the weather will cooperate, but if not, I am sure there will be lots of indoor activities to keep us busy. This will be my first AKA, so I am looking forward to it regardless of what the ‘wet’ coast will bring in the way of weather.