This event report will stray from our normal formula. We solicited impressions of the event from some of the participants, we hope you enjoy the results. Many of the pictures are available in larger images, click on them to see! Most photos courtesy of Larry Benitez.

Da Bumps vs. The Gophers

Air West and Da Bumps meet at the Gopher Hole Corral for a shoot-out. Although for awhile it looked like the gophers might win. It looked like an even rumble, the guys in black coats versus the people in black hats.

Corey Jensen finally discovered the secret of how da Bumps formed, Reid (the 14 year old) picked Bump #2 up in a bar.

Now Reid will be mobbed.

Saturday both teams underestimated the wind -each team flew too light of kite for the conditions – standards in roiling 17-22 mph winds. Jim Barber said he didn’t know North Shores could fly that fast. Da Bumps thought somebody had  substituted rockets for kites. Da Bumps flew, well let us say, bumpily or at the fine line of terror. Air West does a beautiful landing with a pair of refuels. Looks snappy – puts the fear in the hearts and minds of Da Bumps.

Sunday comes, the gophers have been reclaiming the flying field for their own. The wind is kicking again only this time both teams bring out the heavy iron – the vented kites with tamers. Air West drew first – they fly clean and conservative. Looks good. Da Bumps come on, Bump #2 has been trying to appease the wind gods – she hopes it works because she doesn’t want to swim in the bay trying to hold the stall.

Music goes off, the wind dies to about 17 mph just as the stalls start -voila, we can hold the stalls. As soon as the stalls finish the wind goes back to about 20 which is just right for the rest of routine.

We fly the routine about the best we have ever flown.

Later before we leave the fine city of Berkeley we are given a copy of Da Bumps scores and the Da Bumps about faint when we see the score for Sunday’s ballet — 87.95. The black hats ride out of town with the first place trophies and ready for another challenge.

Sorry about getting this out so late. I’ve been threatened with axles or stangulation with my own lines, so I’ve been out learning how.

As seen through the eyes of Canadians Ray Bethell & Dominik Jasper. 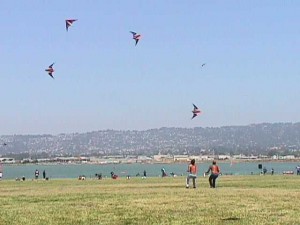 This was my third sponsored trip to Berkeley. This was to me the best one yet. Weather wise, wind wise and friendship wise. I have spoken to Dominik many times about the Berkeley Kite festival and the friendliness of all the Californian flyers. Well!! I must have done a great job because nothing was going to keep him from seeing for himself.

I just didn’t want to listen to any more stories about the ‘best event of the year’. So this time I just followed Ray to the Bay. And my first trip to the Berkeley festival turned out to be everything Ray had promised and more. I got in a day after him and after the shuttle dropped me off I walked over to the flying field. The setting was as spectacular as Ray had promised, so were the winds!

Maybe it was because of the way the fields were laid out but I always felt close to the action. I was simply amazed at the quality of the flying. And another thing Ray was very right about was the friendliness of all the Californian flyers. I was greeted as a friend from the moment I first arrived. It proved to me that this is an event, no one can afford to miss. 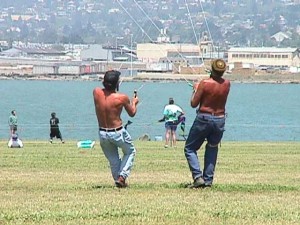 We also had just started a new Pairs Team. This is a first timer for the USA flying two full size kites each, one from each hand and this would be a great place and event to show it off, being done officially for the first time in the USA. Tom McAllister gave us his blessings and was very pleased we had picked his event for this performance. According to the response we received from teams, flyers and spectators alike it was a huge success.

This was the first time I was to perform in front of an audience and yes, I was very nervous!!!! Especially going on the field when everybody is watching since Ray is there! But although the winds were strong, with Ray calling all the right moves we finished our routine without a hitch.

I couldn’t believe the response from seasoned flyers like theBay Area Sundowners, the WASP gang and many others. Wow! This was the place to do it!!! Now we are really on our way.

One of the Highlights of coming to Berkeley, for me , is having the opportunity to spend time with my good friend Brian Champie. He is literally mother, father, cook, nursemaid, babysitter to about ten of us that stayed at his home throughout the festival. Nothing seems to be too much trouble for this friendly giant. On top of all this he works his butt off, organizing and setting up the competition fields. You are very lucky indeed to have this gentle giant help make Berkeley one of the best events in the USA.

Personally I could not believe how smoothly the whole festival ran and I am sure it is because of the continuous work from people like Brian.

With so many events and a comparatively small area there was always room to get your kites to the field you were supposed to be in. Brian also took great care of us after hours and I was really impressed by the way he took care of Ray and made sure he was tucked in his, the only bed every night. As for myself, I was leashed up at the bottom of the bed with a bowl of water. Thanks Brian!

So from both of us, I would like to thank Brian for his hospitality but most of all his friendship.

One of the highlights for everybody has to be the awards banquet on board the Hornblower. A super way to finish of an awesome weekend.

The boat cruise gave me an opportunity to see San Francisco, Golden Gate and the Bay Bridge a way I had never seen it before.

The dinner was great – especially the second time around!

Or was it the third, Dom ? But who is counting!

I would like to take the opportunity to thank my good friends and teammates the Bay Area Sundowners for all their help during my demonstrations. It is a great joy every time for me to share the demonstration field with such a great and outstanding team.

Last but not least I would like to thank my sponsor Tom McAllister for once again helping us get to this great event, which in every way was a huge success.