As a relative newbie to the “wheeled” elements of wind-powered sports, I was delighted to learn that “Ivanpah”, a major kite-buggy event and competition, was held just 30 miles from my home, here in Las Vegas, Nevada. I asked around, and learned that some of my fellow Las Vegas Kite Club members, and Scott Dyer of BFK Sports, would all be attending the event, and Scotty would gladly let me try my hand with some of the exciting wind-powered toys in his inventory.

Saturday, March 13th, I awakened early and rushed through the requisite yard work, eager to be off on the 30-mile jaunt from Las Vegas to the Ivanpah Dry Lake bed, to the south. Alan Brooks, my stunt-kiting instructor and kite pal, arrived at my house around noon, and we headed out.

As we arrived and de-trucked at the site, I was struck by the silvery, dust laden quality of the light and air, and the overwhelming feeling of open space on this huge dry lake bed in the Nevada desert. Scanning about, the scattered gathering of campers, trucks, cars, and vans, interspersed with tents and awnings, lent an air of gypsy transience to the scene. This was far from the city-bound, tightly organized, parking-lot-frenzied kiting events I’d seen previously. Here were encamped a tribe of warriors, replete with the armor and weapons of their sport, and the medieval quality of it all was refreshing to my urban psyche.

Well, 13 proved, once again, an unlucky number in Las Vegas, as time seemed to slog through a windless Saturday. With only light breezes, and hordes of discouraged buggiers languishing in the pits, swapping stories, sipping beers, and eyeing the hanging windsocks with disgust, the day was less than I’d hoped, but offered the thrill of meeting some of the “legends” I’d heard so much about. Corey Jensen, (did I meet him as a buffalo hunter, in a former life?), Dean Jordan (who was wrapping himself around a plate of barbecue at warp speed), the energetic and enthusiastic Jeff Howard, all proved to be, just as I’d suspected, not a whole lot different from other kiters I’ve met on beaches and in parks all over the Southwest. A great bunch of folks were gathered here, and the spirit of joviality and brotherhood kind of reminded me of similar gatherings, way back in the 60’s.

Late in the afternoon, after numerous momentary “teasers” of wind, I fetched out my Dean Jordan X-1 and set up to fly a little, dreading the effect of dry-lake silt on the pretty sail. Several of the attendees stopped by to fly my kite, and I felt good watching some really skilled flyers tricking that kite, offering advice and assistance with tuning, and generally making the best of the way-too-light wind. Throw a kite out on the ground, and in minutes, you’ve got friends. We topped off the evening with dinner at the Buffalo Bill’s casino buffet, in the company of Mike Smathers (Kosmokite from the #kites channel).

Sunday, March 14th, Alan Brooks and I again headed south, arriving at the lake bed a little earlier in the morning, and it was evident immediately that the winds would be much more favorable this day. The pace of activity was evident as we drove up, and kites and buggies were scattered everywhere, as contestants scrambled to rig up and prepare for the best and worst the weather had to offer.

Jeff Howard endured the ministrations of a magazine photography crew, as they rigged his buggy with camera booms, and prepared to be dragged around the lake in a tandem-trailer rig behind him. (Many were the jokes about just what condition those poor photographers would be in, upon their return from that ride!)

As the day progressed, the winds livened up to a steady 12-15, gusting to 25, and things got interesting, indeed. The 50-mile endurance race was slated to begin at 1 pm, then delayed until a little later, as the winds grew in intensity.

By this time, I had gotten my hands on one of Scott Dyer’s little landsailers, and I was hooked. I spent the rest of the afternoon whizzing all over that lake, taking snapshots of the 50-mile race, and generally having a whopping good time at the helm of the little dirt-boat. Zooming alongside Interstate 15, and watching the amused faces of the folks tooling down the freeway, as you pass them in a dirt-boat… wow! 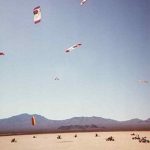 As evening shadows deepened, and the spectacular display of the desert sky faded into darkness, contingents of the Dean Jordan entourage lit fireworks and twirled glowing yo-yo’s from the top of a camper, to the crowd’s delight. Someone launched a little single-line fighter, with some phosphorescent juice squirted all over it, and imitated a UFO in the sky. As the air grew colder, Alan and I said our goodbyes, and headed back to town.

Well, I never got my butt in a buggy, so I still have that to look forward to, perhaps next weekend, as the Las Vegas Kite Club moves their Saturday meeting to the Ivanpah lake for the last day of the event. I didn’t keep very good track of the event, either, but was pleased to learn that one of my #kites IRC-chat acquaintances placed fourth in the 50-mile, Cliff Lemmons (Rokman). I’ll win no awards for event coverage, but I thought others might enjoy my little recap of the experience.

As a stunt flier, with no buggy experience, I found the kite buggy crowd to be a competitive, boisterous, and thoroughly enjoyable bunch of folks, and I had a whole lot of fun with the dirt-boat. I would encourage any kiter to attend a buggy-fest, and enjoy the technology, the cameraderie, and the competitive spirit that pervades the day.

Listening to the conversations about our sport in general, as well as the more esoteric exchanges centered in the buggy culture, I am encouraged that there are good spirits, brilliant minds, and energetic personalities aplenty out there. The sport of kite flying will continue to develop and evolve in new and exciting ways, with each generation of participants, and I’m proud to be amongst such good company. As Dean would have it: AoxomoxoA!