Welcome to the start of a new era for KiteLife. Recently, I was reading one of the many reports on Internet usage that I receive, and was struck by the huge number of people that are using Internet “Portal” sites as entry to their ‘net sessions. Portal sites, such as Yahoo and Netcenter, offer a large number of links to sites of general interest, web search tools, etc. Obviously, many people find them very convenient to use, as their massive traffic numbers indicate.

In conversations with several kitefliers, I proposed the idea of a “Kiter’s Portal” site…. one with well-organized links to areas of interest to kitefliers. Armed with their input, we started to work on the new focus for the KiteLife cover page. On June 18, we asked the KiteLife mailing list members to start testing the site, and the web-based e-mail site, KiteMail.com. They helped us fix some errors, and plot some ideas for the future of KiteLife. Thanks for your help, folks!

By no means does this indicate that the magazine will diminish, in fact, we havesome exciting plans in mind for the next few issues. We saw the need to consolidate as many electronic kiting resources as possible, and organize them for your use. Let us know what you think of the new focus, as well as any suggestions for further resources for us to offer.

With the increasing number of homes and businesses utilizing broadband internet access, the ability to offer multimedia files to readers is becoming reality. So, in the very near future, we will be adding to our family of Kiting domains, with “KiteVideo.com” joining the KiteLife and KiteMail family. We plan to offer high-quality digital kiting videos and super-high quality still pictures for free download by readers. As of now, the launch target is August 15.

Another project in the works is kiting software. I can’t say much now, but I am really excited about this one! Our mailing list members will be contacted in the near future for opportunities to beta test the first program.

We have two new faces joining the staff this month. Mike Dooley authors the “IMHO” column, which I think you will enjoy. Mike is relatively new to kiting, and brings a fresh and funny perspective. Al Stroh will be writing features for us on various topics, with his unique take on things. We welcome Mike and Al.

The Agony and the Ecstacy

Funeral For A Friend

Death is never pretty, but some deaths are uglier and more painful than others. The recent 10th, and final Great Lakes Sportkite Championships sounded the apparent death knell for this once-fine event.

My involvement with this event started in 1992 with my teammates Al Hargus and Vern Balodis. Grand Haven ’92 was my first major kiting event, and I knew after the first hour on the field that I would be involved in this sport for years to come. 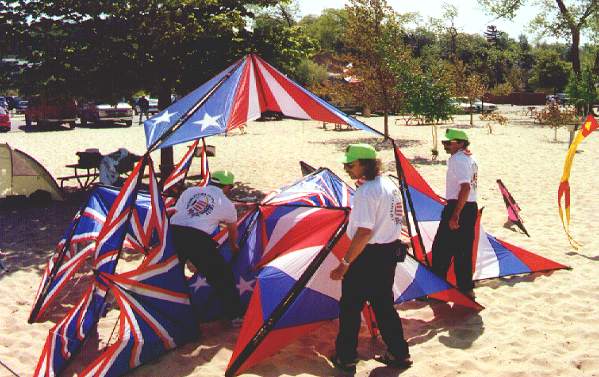 Above: Roger Maddy, You Got Nothin’! Captain Eddie’s with their 24-line TOTL beach sculptures, Grand Haven ’93

This was an event that had everything going it’s way, from a beautiful beach setting, to huge, appreciative crowds, to torrid competition among a large throng of fliers. I had found a home, if only for the third weekend of May every year. One of the “Big Three” US sportkite events, joining Wildwood and Berkley.

To my mind, and the recollections of those that I spoke with regarding the event, the decline of Grand Haven started in ’95. That was the year that entry fees jumped, and the team surcharge was imposed (this event, unlike any other in the US, requires all team/pairs members to pay a per-event fee, a $60 hit for a 4 person team). Also that year, the lion’s share of the flying field area was rented out to kite companies, leaving very little room for practice or free flight. It seems that us kitefliers had become the “dancing bears”…. There to put on a show and help the organizers sell kites and yoyo’s. Competitions started on Friday, requiring an extra day of travel and lost work, all to get the event done on Saturday afternoon, to allow for at least a full day of demos. 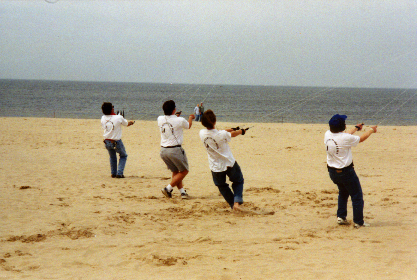 In ’97, it hit me that we were paying $240 in registration fees for ten minutes of flying. Total up the other expenses involved in the weekend, and it ended up costing over $130 per minute of flight time. Additionally, the mood of the event was becoming more and more negative, as the drawbacks of the event became obvious. It no longer made sense for us to attend the event, considering that on almost any given weekend, within a day’s drive were other events with most of the advantages and few of the annoyances of GH, events that didn’t leave such an impression of crass commercialism on the participants.

It seems that others were reaching the same conclusion, as participation dropped precipitously in ’98, and again in ’99. Facing the obvious fact that their event was rapidly sinking into the waves under one of those beautiful Lake Michigan sunsets, the organizers announced that this was to be the last GLSKC. This is a sad day for the kiting sport.

The weekend after this year’s Grand Haven event, we were at Wildwood, listening to stories of the GH organizers trying to “book in” kite entertainers for next year’s fest. In communications with sportkite competitors, the organizers of GH told the fliers that running sportkites was “too expensive”. I just don’t get this argument.

Given the high entry fees and the moderate level of reciprocal payout in the form of banquet, awards, etc, how could running sportkites not be profitable? Over 100 AKA-sanctioned sportkite competitions every year seem to do it quite nicely. But, apparently, paying people to show up will be somehow more profitable than charging people a lot of money to appear. Must be that “New Math”.

To me, it will be regrettable if this sportkite event goes away, when a few simple changes in policy would bring back dozens of competitors/entertainers. Fliers don’t *want* to miss this event… if it were made a slightly more hospitable scene, the event would again thrive.

The changes that I recommend are not very complex, but would address virtually every one of the competitors (and former competitors) dislikes:

* Discontinue Friday competitions. Start the event on-time on Saturday, keep things moving. Run it efficiently, and you can still be done with comps by noon Sunday.

* Reduce expenses, restructure entry fees. Why fly in a chief judge, when there is one with much more current experience in the same state? Make T-shirts optional if need be. Bring entry fees in line with other events, eliminate the team/pairs penalty fee.

* Arrange a Saturday night social event, even if it is in a tent and is BYOB. The where and what isn’t important, it is a matter of giving the fliers a place to meet, and showing that you care about them.

* AKA rules specify a 30-day lead time for mailing of compulsories, field sizes, etc. Double this. Even better, get it out 90 days in advance. If you publish it 90 days before the event, and take my other suggestions to heart, KiteLife.com will pay for mailing it to every AKA member in the midwest, in addition to publishing the event info in the March 2000 issue. I will put my money where my mouth is.

* If no more beach area is available for competitor warm-up, try an innovative approach. Have sign-up times for practice field, perhaps.

* When a competitor doesn’t receive their award at the event, send it to them! This one item has caused more hard feelings than you would imagine.

Bob, Steve, and Tom, when you talk about making next year’s event a “show” festival, don’t lose sight of who has been providing the majority of the show for the last ten years. Sportkiters are to thank for a large part of your current success. I urge you to reconsider your announced decision to end the GLSKC, and to consider what a kite festival without many kite fliers will be like.

The thousands of locals who come to the event may or may not notice a change, but believe me, the community of sportkiters will. Schedule the GLSKC for 2000, follow the recommendations above, and it will be like rolling back time, back to happier days on the beach.

Think about it, ok guys? We look forward to your response.

For other viewpoints of this year’s GLSKC, see Phil Broder’s column and our event report.

An Old Friend, and Lots of New Friends

Enough depression, time to move on to the “Ecstacy” part of the article. I just returned from two great events, hitting both US coasts in the space of a week. I guess that means that I am now an avowed bicoastual!

What can be said about Wildwood that hasn’t been already written? Put this Mecca for kitefliers on your schedule for at least once in your kiting career. This year’s event was the biggest and best yet, the Sky Festivals and Eastern League folks continue to outdo themselves year after year.

A personal highlight for me was flying team ballet with a backdrop of 40-odd kites over 250 sq. feet as a backdrop. What a rush! At first, I wanted to radio the other field and ask them to take down the distracting offenders, but once I adjusted to the painting, it was an incredible experience to see our 4 sportkites making the shapes, framed by such a colorful sky. It was an awe-inspiring 5 minutes of flight.

I drove home from Wildwood, repacked, and grabbed my long-suffering kite widow, Julie, for a twentieth anniversary trip to the Pacific Northwest. Oh, honey, did I forget to mention that there happens to be a kite festival in Ocean Shores this weekend? How could I have forgotten to tell you that….

We flew into Portland on Thursday afternoon and meandered our way up the coast to Long Beach, Washington.

My Kind of Town.. Four Kite Stores, and No Walmart!

Remember the show “Northern Exposure”? We were struck by the similarities between Long Beach and the fictional town of Cicely, Alaska. We met some colorful local characters, and Julie shopped her brains out as I visited the kite stores. I had a nice time visiting “Stormin’ Norman”, Bill Storey, and Dave Colbert, the owners of the kite stores. Looks like business is booming here in the self-proclaimed “Kite Capital of the World”.

We wandered up to Ocean Shores on Friday, stopping to lunch on oysters and beer. Arrived at Cutting Edge Kites to find a large crowd of fliers hanging out and swapping lies.

Here’s the “new friends” part of the article. I’ve never been to a regional event on the West coast, so the majority of the sixty or so folks attending the event were strangers to me. That situation rapidly changed, as the hospitality shown to Julie and I was wonderful. By Saturday afternoon, it was as if we were at one of the Midwest events that we have attended for years. Aren’t kiters great people?

The trip was very therapeutic, serving as another big reminder of why I love the kiting sport so much. We are looking forward to next year’s trip already.

Thanks for reading my rants, raves and travelogue. They say that opinions are like, err, earlobes, everyone has them. I’ve got plenty of them.