As a long time sport kite participant, I’ve been around all kinds of kiting activities including power and traction flying… However, my prime love of traditional sport kiting has always taken priority and I never really seemed to find the time to spend aboard a buggy or board. 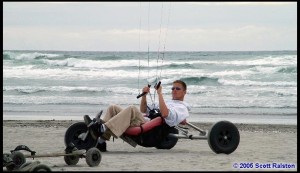 In early 1994 I attended the first ever Buggy Blast in Ivanpah, Nevada… Buggying had just caught on big time, and I figured I’d stop in on my way back from the KTAI trade show in Las Vegas.

As luck would have it, winds were pretty high that year and so I was pretty overpowered even though I was using a smaller Quadrafoil… As I recall, I wasn’t able to tack back the mile or so to camp and ended up pulling the buggy behind, on foot.

In the eleven years since then, great advancements have been made with regard to lighter kites, lighter buggys and boards, and more efficient controls for both… I knew I wanted to give it a try again, but kept putting it off until the gang from Windzup rolled through my hometown of Portland Oregon…

Late Thursday afternoon, June 9th, I was sitting in the Kitelife office and received a call from Scott at The Kite Shoppe letting me know that folks from Windzup/Ozone were coming into town and would be on our home field (in Portland, OR) around 5pm to fly some of their power foils!

Now, I have to say again… Power flying isn’t usually my thing, but I’ve known Brian and Heather Schenck from Windzup for a couple of years now and always appreciate their zest for the kiting community and ultimate belief in mutual benefit between the various facets of kiting.  Besides, I try to sample things on a repeating basis… Just to see if my tastes have changed, and am sometimes rewarded with a newfound appreciation.

Almost right on time, the Schencks showed up with their truck and travel trailer, complete with Windzup and Ozone decals.  For those of you who don’t know these guys, they spend the better part of the year on the road, putting on demos and giving lessons on how to fly and safely handle power foils… This is closely tied in with Snowkiting and kite groundboarding (KGB).  While they’re doing an effective job of promoting, it also lends to the overall profile of kiting.

After the few local fliers who showed up had spent a couple hours flying the 3M, 4.5M and 7M foils on our nice grass field, we definitely worked up one heck of an appetite!  Heading across the highway, we made our way into a local Mexican restaurant for some hearty grub… So it turns out that Brian and Heather were en route to Seaside for the weekend to put on a couple of demo days at Sunset Beach. Then somewhere between dinner and the parking lot we decided that they would kidnap me for the weekend to do some KGB and buggying!

A quick stop back at the house for a couple kites, some clothes and my cameras, we jumped in the truck and left for a late night drive to the coast.

We arrived in Seaside sometime around midnight and rolled into the rental house next to the home of long time Seaside resident Eli Anderson… I’ve known Eli for over ten years now, and enjoyed sharing time on both sport and power kites with him in the past. This weekend promised to be a good one!

Waking up early in the morning, I was somewhat reminded of what a bunch of BMX racers might look like as they roll out of bed with ruffled hair, sleepy eyes, coffee in one hand and a wrench in the other… Before the coffee even kicked in, these guys were already putting together their rigs and conducting any necessary repairs!

By mid-morning everyone was ready, so we loaded up the wheel-barrow (yes, the wheel barrow) with kites, gear and boards, then made our way out onto the beach near Eli’s house with buggies in tow… Along for this first run were Brian and Heather, Eli, Eli’s dad, and Jon Ellis. Not having flown any serious power or traction in a couple of years, I can definitely say that I was both nervous and excited at the same time, but wasn’t really worried with such experienced pilots around me.

For what was essentially a quick afternoon session, we picked an end of the beach and started to set up and Eli was up and away within minutes of arriving, while the Schencks helped me gear up for a bit of ground boarding… Always remember your pads and helmet when doing this sort of thing. A few minutes of precaution can help ensure you can come back out and play another day.

Landboarding proved to be a little more difficult than my time in a buggy years ago, mainly due to the center of gravity being higher up… But after a few passes, I found myself toddling up and down the beach, never letting the power get out of hand. I just spent the evening learning my balance and getting used to where the power zone was in my kite.

As the sun was setting, I had fairly well gotten my bearings on what was what, which only added fuel to my interest for the following day.

After a great night of BBQ burgers and partying with these crazy traction kiters, it was time for another day in the wind so we loaded everything into the truck and headed up to Sunset Beach for an official demo day with the folks at Ozone… Winds were light right off, so I pulled out my dual line for some trick flying on the dunes while Brian and Heather set up their camp, complete with camouflage netting and Ozone flags.

A small ramp was part of today’s arsenal, and everyone was hoping for good winds, not only for them to catch some air, but also for those who would come out that day for demo time on the Ozone products.  The wind did finally started to build after an hour or so, which was all these guys needed to get some decent speeds on the hard packed beach.

Again equipped with all the safety gear, I strapped on a harness and took a more gingerly approach than my cohorts… Tooling back and forth, I spent another hour or so getting the hang of KGB (Kite Ground Boarding), and here’s what I found to be some the most challenging aspects:

So, nothing really unmanageable… The more I tried it, the more I found that the only ultimately difficult aspect was anticipation! A couple hours later, I was making decent passes up and down the beach, covering what might have been 500 feet at a time.

For sure, there were a couple times I got going a little too fast for my comfort, giving me cause to jump off the board… But that was all there was to it aside from making sure you come away from the board cleanly. While you’re riding KGB, you’ll generally have your feet slipped into straps (over the shoe) so you don’t slip off the board during a normal ride. While these prove to be invaluable in most cases, you definitely want to be conscious of how your feet come out of them when you bail… The boards are fairly heavy, so they could give an ankle a good twist if you took a spill with one of your feet still locked in.

Having conquered my fear of KGB, I ventured back to something I did did have a little more familiarity with, the kite buggy! Kites and buggies sure have come a long way since those days on the desert with Corey Jensen… Easier to depower, more efficient, more stable, I think everything was even easier than I remembered!

Settling into the buggy, I found what I’d been looking for all weekend with a real urge to “open it up” and test my abilities… Using a buggy with a particularly wide axle, I found that I could really drive the kite through it’s power zone without half as much concern about getting pulled up and out of my ride.  Being so much lower to the ground, I could really power up and slingshot off the line, so to speak.

Now, take into account that I never got on anything larger than a 6 meter foil, while Eli, Brian and Jon were all playing with kites as large as 14 meters, getting some massive air on their KGBs and shooting up rooster tails of sand as they tore through the dunes on their buggies… That’s fine, for an old sport kiter like me. What I had was plenty to get the job done.

What’s the moral of this story you say?

Just sharing the experience that traction kiting is definitely more than an “extreme sport.” It’s another great kiting pastime with it’s own brand of participants… Even clearly coming in as an “outsider” from the sport kite end of things, I found everyone to be very helpful and considerate, even going so far as to share their gear and spend time with me as I learned the ropes.  What a unique weekend all in all… I can safely say I’d never been abducted by kite kidnappers before, until now.

If you ever have the chance to try traction kiting, give it a shot… And if not, just sit back and watch the show!

Thanks to Brian and Heather for taking me under their wings, for their great attitude, and for their faith in kiting as a global community… I’m still a “regular sport kiter” at heart, but they’ve opened my eyes to another worthwhile and fulfilling activity!