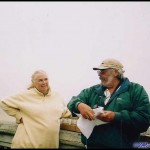 On Saturday, September 3, 2005, the Bay Area Sport Kite League held their annual championship, The Golden Gate Challenge here at the scenic Ocean Beach in San Francisco, California. Award winning flyers gathered from as far as La Jolla, CA to compete for fun, prizes and to promote kiting in general. For several months our weather along the entire Pacific Coast remained cold, with either wet fog or heavy overcast skies. Today was no exception, but luckily, the dry atmosphere and good 10 mph winds blessed us all. BASKL (Bay Area Sport Kite League) had excellent competition attendance including great food catered for us exuberant kiters. 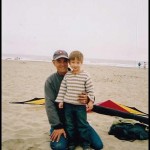 Within an hour, two large and stunning delta kites cheerfully decorated the dark skies. One gentleman got hooked on kiting after attending the 2005 Berkeley Kite Festival and promised to fly the biggest Delta Conyne he could find trailing two long majestic tails. However, the gigantic Delta Teckno of 19 feet was launched to beat the record and join its friend to the amazement of several onlookers. I wanted to see more single lines flying lazily in the breeze so maybe next year I’ll bring ten! Later in the afternoon, a special treat could be observed far in the distance when Gordon Osterland of San Francisco who flies with The Bay Area Sundowners, exercised his thirteen Hyperkite stack for a few hours. Fellow team members were absent, and nearly eight seawalls away, you could still see the colorful Hyperkites darting through the air like a needle. 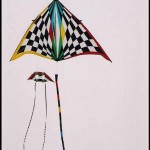 Among the scheduled championship categories, one included “Hot Tricks” where a newcomer, Michael Black entered his first competition. I have been watching his routine for months as he practiced at the beach. He uses kites that are the Transfer XTR by L-Atelier manufacturers. I and other fliers admired his amazing talent and style that led us to encouraged him to compete in BASKL. He said that he would give it serious consideration and on that day we celebrated the reward of our perseverance. Michael entered the “Hot Tricks” division and spun out those Yo Yos, Pancakes and Axles for the crowd and judges; only to win first place against the powerful talent of Aaron Champie! He was flabbergasted and now feels inspired to compete again so we will see more of him. 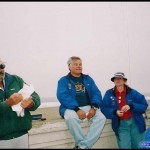 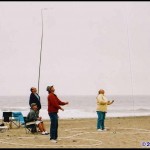 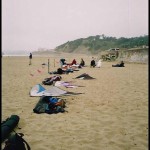 For me, I entered my first competition for the Novice Individual Ballet. After practicing many choreographed routines, I discovered too late that this fly had to be shortened down to four minutes over the seven minutes that was rehearsed. Since the winds were kicking up, I hurriedly switched over from my light wind Breeze kite to my Beetle kite and attached its three purple tails consisting of two 45-footers for the wing tips and the 100-footer trailing from the spine. The Beetle is my old standby that I can rely on as my other sport kites including a Kestrel have darn “attitudes” in different winds, but the Beetle never gives any lip. So, now I’m flying to the waltz of The Blue Danube played by the Vienna State Orchestra. The tails outlined the kite’s direction of swirls, figure eights, both vertical and horizontal as everything flew literally and gracefully with the music, or so I hoped. My only fear was being unaware when the four minutes were up. Bad luck! The waltzing kite brushed the sand and fell! By the time the Beetle was back in the air, only thirty seconds remained and made for a lousy awkward landing. However, I had a good laugh as we all learn from trial and error. I was just experiencing those exhilarating moments to be flying with the very best. Oh, by the way, I came in fifth. Not bad for a rookie or that’s what I was told.

For complete results, check the AKA site.

In the afternoon, a real comedy skit was occurring. A homeless gentleman that I will call Mr. Kite, who practically lives on the beach, has full charge of one task and one task only. He makes and flies kites! He relentlessly gathers any and all makeshift materials found in recycling bins and manages to make his kites including tails that really fly. Eventually, the monstrosities snap from the string (can’t afford fancy fly line) and go floating toward cars or they get shattered on poles. No problem, he will just construct another creation for he lives, thinks, breaths, kites beginning with sunrise. He must the most dedicated kiter on this planet! So, during our BASKL event, Mr. Kite was hilariously happy to be surrounded with us champions. Out of kindness, he got a delicious free lunch at our booth, then celebrated all the excitement by bringing back a liter of Vodka and consumes the entire bottle only to pass out face first between the two flying arenas! Later, when I saw him again, he was standing on his head waving his legs in the air. He continued his show of enthusiasm for the remainder of the afternoon. 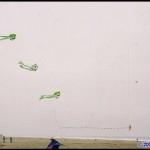 At days end, our finale was climaxed with the fabulous AirZone Flight Team under the Master Team Precision. These kite-flying artists execute intricate aerial displays where one kite will follow the others and at times all kites meet in a rectangle only to break away. The AirZone Flight Team includes Aaron Champie, Wayne Fu, Ulysses Villanueva, Michael Rodriguez and two new additional flyers just added to the team. This brought out many digital cameras, camcorders and applauds for our own AirZone Flight Team.

Around 6:00 pm, awards were given out to the day’s winners. Our frozen noses and hands took the awards in the form of tall glass mugs. As usual Aaron Champie came back with nearly one dozen mugs. I was now starting to shake from the cold as I noticed that Gordon and his Hyper kites were now gone, my dear friend with the rainbow kite tail had disappeared, and Mr. Kite was now flat on his back. A memorable event and I cannot wait for the 2006 Golden Gate Challenge!