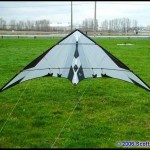 Quality of Construction
Level One kites are known for their precise and often near flawless construction, and this kite is no different. All of the fittings are fastened into place with well-glued c-clips, the sail is taped and sewn with a zig-zag stitch and in places of heavy line traffic the sewing is exceptional. Between the standoff’s reinforcements there is a mylar strip to protect the leading edge.

The spine is tensioned in the familiar Level One style with a nock on a 6mm spine that has a line looped and wrapped around it. There is a line that connects from the inner standoffs to the spine to help prevent line wraps around the spine making the keel of the kite smooth and without anything for a line to catch on.

Stock the Jumping Jack Flash comes with 6 grams of weight on the tail. Level One has switched to a new weight system that has a small brass tube with a circular groove cut out to been tied with a zip tie to the spine.

Bridle
The bridle of the Jumping Jack Flash is a simple 3 point affair with adjustable pigtails for angle of attack. There is very little need to adjust except to compensate for wind conditions an the bridle does this well.

The bridle is attached directly around the APA connectors with a lark’s head looping around the connector, making slipping bridles a thing of the past.

Design Features and Tuning
The Jumping Jack Flash has some unique tuning features. The outer standoff can be moved inwards (towards the nose) to loosesn the trailing edge. This allows for tighter precision and a very crowd pleasing roar as the kite rips through the air. The leech line is also adjustable, and when together loosened with the standoff position you can get some of the straightest lines of any kite out there these days.

The tail weight is movable but not so much so that it will be moved during flight. Moving from nose to tail requires only a new zip tie and no de-tensioning of the spine. This is certainly an upgrade from the previous tube system on level one kites that required de-tensioning the spine.

Level One has also begun putting backup yo-yo stoppers on many of their new kites and the Jumping Jack Flash is no exception. Behind the standard yo-yo stoppers there are 3 zip-ties that function very well as backup stoppers in case of missing the primaries.

Wind Range
Level One lists the wind range at 3-12mph, but I found the wind range to be slightly higher without any detrimental characteristics. I would put the upper end of this kite at about 18mph.

Amount of Pull and Sensitivity
The Jumping Jack Flash is a smaller kite with a solid feel on the lines. In higher winds the kite doesn’t feel overly heavy on the lines, nor does it feel unusually light in lower winds. I generally prefer a softer feel on the lines and this kite exceeded my preference but not uncomfortably. For the majority of flying public it seems spot on. The movements required to trick this kite are rather small. You can get a lot out of it with minimal movement, but the kite reacts kindly to larger movements. The occasional extra-strong smack wont throw it out of the sky, but it still will execute much nicer with more finesse

Unusual Flight Behaviors
When thrown onto its back the kite likes to have immediate input and will shallow out if left there too long. With how friendly the kite is to mistimed and overly-string inputs I found it somewhat hard to go back to other kites that require more precise timing. Bad? Not at all, but certainly unusual.

Strongest Tricks
The Jumping Jack Flash could very well have been renamed the Wap-Do-Wap machine and been very aptly named. Two and three rotations are very easy and cascading left and right wap-do-waps are eerily easy in the entire wind range of the kite. Likewise the ladole is very easy as well, in fact this is the kite I learned the trick on. Comete’s are also very easy though somewhat resembling a torpille, still very specifically a comete. Most tricks on this kite are easy to do with how extremely forgiving it is.

Most Challenging Tricks
I have seen it done without issue on the Jumping Jack Flash but insanes and rolling cascades were somewhat difficult for me on this kite. Not a trick I have trouble with either, but the kite required a very specific timing and entry to get a smooth and consistant roll.

Precision (corners, tracking, speed)
Tracking is and corners are alright stock, but the full potential of the kite is not revealed until you adjust the standoff and leech line. Even I, a mediocre precision pilot, was able to rip through the sky like the kite was thrown on a set of rails on autopilot. Some of the tricking ability is lost in this mode but for a competition pilot to have a single kite that can switch to such amazing precision ability on the same kite he was just doing tricks with is a very nice thing. Speed control in this mode is amazingly simple.

Similarities and Differences to Other Kites
The Jumping Jack Flash is somewhat reminiscent of the Level One X-treme except with more features and much nicer tracking. The style of tricks is very similar to watching a .85 fury but the executing and movements required are very different. The Jumping Jack Flash is a rather unique kite that I think we’ll be seeing more of in style as time goes on. I would think this is the type of kite that you compare other kites to, not that you compare to other kites.

Flying Experience
My first time with the kite was in somewhat high winds gusting up around 13-15mph. My general test for any kite being to fly up to the top of the wind and comete back down, no problem. Next try is always a crazy copter, also no problem. Coming back down to the center of the window I was surprised at how well the kite held up in the winds. I wholly expected it to be shuttering and roaring and it was surprisingly silent and behaved. Even with the higher wind I had issues with the insane and rolling cascade but eventually figured out it needs a slightly nose down entry and very careful tending of the “pull hand”. Tracking was fair as the kite was not setup for precision. I felt somewhat hesitant to allow the trailing edge free in higher wind. This is not any indication of it’s ability otherwise though.

The next day out the winds were much friendlier and the kite really showed what it had to offer. Same thing as the day before, up to the top and comete back down. Remarkably torpille like in lighter winds yet still familiar as a comete. Crazy copter still worked admirably. Holding a fade was simply, but required careful tending. On the spur of the moment I tried a wap-do-wap. WHOOPS! It rotated 3 times! Much laughter to be had after that one. Tried it again and no problem coming back into the fade after a single rotation then banging another one with the opposite hand then back again. Yo-Yo’s were very quite and multilazies were not flat but still easy to execute. Backspins were easy but not the prettiest though it was very easy to knock a backspin out with an incomplete setup. Cascades are clean, but require a bit of thought to make sure the kite descends rather than staying in place. Tip-stabs, as done by John Barresi, were absolutely frightening. The most violent and earth shattering I’ve seen on about any kite. With good ground you could easily slam the tip into the earth and walk away, the kite standing on its own.

I took the kite out again a few days later in some light winds around 3-4mph to try some of the “new” tricks. First try I did my first ladole. Afterwards a very high percentage on the ladole as well. Yo-fade was fairly easy but a few times I found the flying line catching on the backup yo-yo stoppers. Crazy copters were dead easy even a few feet off the ground. The kite doest lie deep enough on its back for any of the newer lazy susan maneuvers but anything coming from or through a fade was super simple. Combo tricks from alternating multilazies, rollups and backspins were executed fairly easily as well.

Summary
The Jumping Jack Flash comes in 3 versions, SUL, UL and STD with a proposed vented in the works. It is billed as a smaller wide range competition kite and though that’s already been proven by Marcel Mehler, I will agree. The ability to change between radical trickability and solid precision make the Jumping Jack Flash an excellent kite to have in the bag for any serious flier. For the freestyle flier the ktie offers some radical abilities and forgiving learning curve from many of the newer tricks without sacrificing much of the basics.

With a retail price under 200$ the Jumping Jack Flash is a kite that has the ability to satisfy nearly anyone looking for a 2m kite for either precision or tricks.