High winds and land sailers on the beach last night, gave some preview of what was to come today…When we woke up this morning, we knew it was going to be more of a handful than the first day of competition, it was simply howling and ripping around outside our window, framed by a fairly dark grey sky over the entire town.

Fliers were concerned about the winds during the pilots meeting, but readings showed between 32-38 kph, far enough under the maximum limit of 45 kph.

With the flags of each representing team flapping loudly in the wind, a ton of vented kites and all manner of braking mechanisms were being set up in the pits as fliers prepared for the most challenging day of competition seen at this year’s WSKC.

You can tell it’s really howling here once the sand starts to visibly blow across the beach… At this point, you’re at least into 20 mph and all over the pits, you could see teams with wind meters up in the air, probably half hoping that it’d bump itself over the upper limit for this event. The Flying Squad was out flying, but, on 1.5s that looked more like swiss cheese, vented with with what must have been over a hundred holes, on top of the regular venting, and they still looked like a little tough to keep under control.

Of all the teams who flew today, Neo (Japan) and Ninja (Japan) seemed the most comfortable, ripping their kites through the sky with determination and authority… Watnu also turned out a solid performance, earning yet another top five ranking.

Cutting Edge and Tame Bird still brought some of their A game to the field, finishing high in the order yet again… As the morning progressed, the winds only got stronger and in retrospect (from our cozy Kitelife Office, where we have yet to knock out the power today) we’re surprised we didn’t seen any equipment failures though we’re pretty sure a number of the kites were flown to their absolute limits.

Bumped from second in the order to the end, there was a last minute change of members on Flame (UK), with Robin from the Scratch Bunnies taking over for Alex who started the week with a sore throat and found himself very much under the weather today… All things considered, they did very well, complete with a downwind landing in the high winds from member Barry Saville, after landing on his butt!

During the last half of precision, thousands of French school children arrived on the beach with paper diamond kites, making up the majority of our spectators today… Every once in a while, some multi-colored kid’s kite would go tumbling down the beach and a desperate child would have to be discouraged from chasing it across the competition field.

All through the lunch break teams kept sneaking concerned glances at the judges table, wondering whether or not competition would continue today… With winds ranging from 41-50kph, ballet was eventually delayed until tomorrow morning – but not until all the judges, field director and teams headed back out onto the field. We suspect there was a rather large sigh of relief from some nervous fliers and we were relieved as well, since our big worry was that the tripod was going to blow over and how exactly we were going to get the sand out of the camera at the end of the day.

Scratch Bunnies spent a good portion of the day developing a six man routine, featuring Carl and James Robertshaw (pictured below), for demonstration performances this weeked… There has been a lot of hype around this, and with the fliers involved, it will likely be one heck of a show! We plan to get it on video for our Kitelife archives once John returns from China at the end of April. 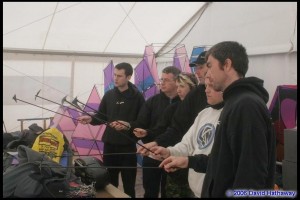 This afternoon was spent with little pockets of flyers, sitting in warm cafes and restaurants, discussing what may have been and the tight race that will unfold tomorrow as the final ballet brings this event to a close. At this point, the top five honors are still up for grabs and it will be an exciting race tomorrow.

At the moment, we’re writing this from the cafe in our hotel and the wind is literally howling and whistling outside – let’s hope it gets better… Currently the weather forecast (which has been pretty reliable) suggests its going to be a much nicer day with winds in the 10 – 15 mph range and possibly a sunny afternoon. We can’t wait to see how it all unfolds.