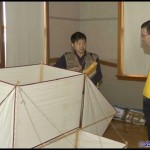 No one (to The Drachen Foundation’s knowledge) owns an original Roch Donzella “Monobloc” kite from 1911. So DF recently added to its archive a replica, constructed under the careful tutelage of historical kite researcher and builder, Falk Hilsenbek.  Read on to find out more about the significance of this kite, and learn how you can participate in an upcoming historical kite workshop, at Apeldoorn in November 2006.

During the final quarter of the nineteenth and the beginning of the twentieth centuries, an “aeronautical ferment” (in Richard Hallion’s phrase) swept France. It encompassed the world of kiting as well. France was home not only to the French Aerial Navigation Society but also to the French League of Kites, developed to provide federal support for experimental studies with kites. The journal Le Cerf-Volant detailed the discoveries and disputes of kite innovators, among them Le Cornu, Saconney, and Houard. 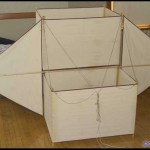 Roch Donzella was a member of this group, and published in Le Cerf-Volant an article about his 1911 “Monobloc” kite, entitled “Monocellulaire et décentré.” In it he discusses questions raised by Pujo about the stability in heavy winds of a single-celled “apparatus” [appareil]. He points to Hargrave’s experiments with winged box kites and explains his own devotion to triangular wings.

Roch Donzella then sets himself the challenge of “constructing an apparatus uniting at the same time the qualities of the ‘décentré’ (stability, solidity, traction) and those of the ‘monocellulaire’ (simplicity, lightness, good angle).” He reasons, “One cell may be stable; it thus stands to reason that two [cells] will surely be so.” He will set the two rectangular cells one above the other, without any “thickening” or “spreading” between them, but not on the same axis (thus off-center), to take best advantage of the “nets of air” [filets d’air]. Smaller triangular wings will reduce the weight of the apparatus without “injuring” its “solidity.” He expresses full confidence that “all kite fliers” will be able to construct a similar apparatus based on these principles, according to his drawings and dimensions.

He then describes in great detail his test flight at Dunkerque, on February 19th, in a field 200 x 75 meters, surrounded by grand houses and trees, which create a “veritable basin [cuvette] where vortexes [tourbillons] were followed by ‘pockets of air’ [‘trous d’air’].” In fact, he says, the wind smashed some “very stable Hargraves” into the ground “more than once.” His kite, on the other hand, mounted rapidly, at an angle of 45 to 50 degrees. When it came to landing, the kite was caught by a gust of air, barely cleared the tops of the trees some thirty meters away, and fell to the ground with the “speed of a stone.” But, he declares, it broke only one “croisillon” in the process.

Roch Donzella concludes from this test that “the apparatus has thus proved its admirable characteristics, withstanding without weakening a tempest-like wind and a return to earth under the very worst conditions with minimal damage.” Bridle adjusted on the following day, the kite achieves even better results, despite a lessening of the wind. Roch Donzella decides to name it (if Pujo consents) the “monobloc” because of its “slightly massive shape” [sa forme un peu massive]. The article ends with his speculations that the apparatus could be even further improved by constructing it “obliquely” or by diminishing its “density” through a Cody “assembly” or the use of different materials. Three cells and two pairs of wings might have such stability and “elegant allure” as to “seduce” even more kite makers into experimenting with the form.

Based on this single article, German historical kite maker Falk Hilsenbeck drew up meticulous plans and “seduced” fifteen students into recreating this historic kite at his 2006 Fort Worden Kitemakers Conference workshop. As participant (and DF Executive Director) Ali Fujino explains, “Historical kites are difficult because of the unfamiliar materials and techniques for fabrication that aren’t common at our level of skill. The magic in this workshop was Falk’s ability to patiently break down each step of production and take us through those steps, at a thoughtful, ‘address-one-thing-at-a-time” pace. For most of us this was a big step forward in kite fabrication. Sewing cotton instead of ripstop had its challenges. Working with wood—sanding, fitting, and hammering—was a new experience. Finally, attaching and tying the bridle lines at more than one point, and tensioning them, required more skill than with any modern kite. But Falk’s dissection of each step made it easy for us to begin and complete. After eight hours of intensive work, every participant had either completed a Roch Donzella that could fly—or was within easy reach of the finish.” Falk also included flying tips (perhaps keeping in mind Roch Donzella’s precarious test landing): participants were advised not to “be a hero: if the wind is stronger than four Beaufort take away the wings. If not, the kite would become very nervous and could break one of the wooden parts or could crash.”

The Roch Donzella “Monobloc” constructed by Fujino and DF staff member Renea Nielsen, working as a team, is a happy addition to the DF archive. Scott Skinner, DF Board president, explains why the archive wants to hold this kind of replica in the absence of an original. “Building any turn-of-the-twentieth-century cellular kite is a real challenge. Doing so requires using unfamiliar materials, inferring oft-missing construction details, and thinking in three dimensions. Falk demystified this process and enabled us to succeed; this kite, along with his instruction manual, will document his achievement. In building kites like this, we are reminded of the ingenuity of kite fliers trying to solve the mystery of manned flight. We also see that materials of the time are ideally suited to the designs, and in making these kites with modern materials (carbon-fiber, ripstop), we change their very nature.” 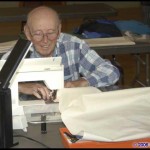 The DF archive “Monobloc” will bear a special name, honoring kite maker Sam Huston, who died recently. Skinner and Fujino say, “One of our fondest moments with Sam was at the last Ft. Worden Kite Retreat in March. As we struggled on our first Ft. Worden historical kite, he offered the best of words, ‘Sew like you mean it …’ and never found it an annoyance that we needed help. Sam helped us actually finish the class, and our Donzella kite is now the Donzella Huston.”

If you are intrigued by the subject of historical kites, plan to join historical kite specialists at a sixth annual workshop in Apeldoorn, the Netherlands, on November 10-12, 2006. Participants will hear presentations by Jan Desimpelaere of Belgium about Russian meteorological and military kites and by Hans-Ullrich Draheim of Germany about his collection of World War II kites and memorabilia. They will also construct a turn-of-the-last-century children’s kite from the Roach catalogue. The Drachen Foundation is helping to organize the workshop. For further information, contact Douwe Jan Joustra at d.j.joustra@chello.nl.

The Drachen Foundation thanks Dr. Judith Suther for advice and review of its French translation.