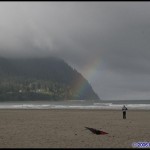 As we made our way to Seaside for the the second outdoor NWSKL event of 2006, I thought back to last year when winds were in the upper teens and twenties for most of both days and pouring rain… Flying a mega team with TKS Mid-Air and Cutting Edge the first morning, rain came down so hard it was literally running down our cracks – yet, in true Northwest style, it didn’t faze us a bit.

Fortunately, this year was going to prove to be much better weather-wise! We rolled in around 2pm on Friday to catch some much needed individual practice right in front of the main street promenade, stopped for burgers at the Big Kahuna pub, then a quick run to the local market for some cold frosty ones to take back to the room before bed.

Arising around 5:30am Saturday morning, we made our way to the local Pig’n Pancake for a hearty breakfast before our day got into full swing… At the previous NWSKL event in Ocean Shores, we ran every discipline in one day and we weren’t sure if this would be the case in Seaside. 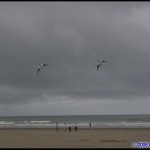 As usual, Doug Lommell was among the very first to hit the beach, complete with all the stuff for setting up our fields (in the NWSKL, everyone helps set up, or you don’t compete). Before field set up got rolling, TKS Mid-Air set up for some early practice in the 2-4 mph winds… With my busy travel schedule, it’s hard to find enough practice time so we really do try to make the best of it when we can. In this instance, nature rewarded us with an absolutely beautiful rainbow right off the point, which I had spotted over my should while we were flying… We didn’t get rained on, but there was enough water in the air to give us a great show.

The winds were picking up into the 6-8 mph range as we brought practice to a close and everyone started earnestly on setting up the competition field… There was a forecast for “few showers”, but the weather gods saw fit to do nothing more than give us a couple of petite sprinkles during the course of the day. 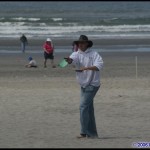 At the pilots meeting, judges and pilots discussed whether or not we wanted to try and run everything through in one day again, with a forecast of occasional rain on Sunday… Being used to the rain, and it not threatening to wash us away or anything, we unanimously agreed to spread it out over both days, and possibly even fit in a few demos while we were at it.

Saturday night would find us all meeting at the Pizza Harbor for dinner, courtesy of the NWSKL… The day’s awards were handed out, friends socialized, and Mike Huff did a rousing job of inspiring the attending folks with reports from France and China, encouraging them to think big, start teams, and do whatever they can to “go for the gold”.

For our first discipline (MIP), we kicked it off with about 5-6 mph. Dan Haige proved himself yet again as the most consistent dual line precision flier in the NWSKL’s masters class, followed by myself and Don Ostey… Noticably absent this year were Jerry Cannon and Wayne Turner who usually round out the Masters dual line class at this event, but they were still recovering (time and budget) from their recent and extended trips abroad for the World Sport Kite Championships in France. 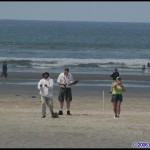 In the Novice class, Moon Kushner made a triumphant return to Oregon after several months of living in Texas, flying her Fury .85 to a win in precision on Saturday… Amy Doran of Bend (OR) made use of challenging (2-4 mph) winds in Novice ballet on Sunday, using a standard Jumping Jack Flash to capture 1st place. Amy also went on to fly Adreneline 5-stacks with Todd Rudolph in Open Team Train, improvised and uncontested, marking the first time the Northwest has run that discipline in a little over a year. 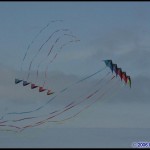 One particular set of disciplines that showed tremendous promise for the coming year was Multi-Line… Although I was the only Masters flier entered in the Open event, there were a whopping 6 Experienced entrants in precision and 7 in ballet! Already showing the potential for our coming year of quad, David Hathaway and Alan Cunningham continue their race for 1st in the NWSKL standings. Also very worthy of note was first time outdoor multi-line entrant Egan Davis! Although he’s been flying his Rev indoors for most of the year, Egan has only been practicing his outdoor skills for a couple of weeks and is already showing an amazing affinity with it, turning out a ballet routine that had his fellow competitors and spectators in absolute stitches from laughter. 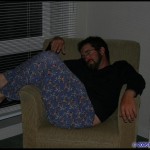 In the team events, TKS Mid-Air went unchallenged due to the absence of one of 6th Sense’s three members (Wayne). Closing out the weekend with Open team ballet and precision, they flew in 1-2 mph conditions (extremely challenging for any team) and made the best of it, resetting their kites downwind in-between compulsories and working hard to make good use of the field space in ballet… Not half bad for a  group of fliers that effectively started competing just last year!

Ah yes… The Sky Dazzle may not be a huge event, but it’s always very intimate and offers a great opportunity for skill exchange in the early season as fliers try to bulk up their abilities for the AKA Grand Nationals (AKAGN) in October. Although the AKAGN will be in Iowa this year, there’s a reason Seaside has hosted the event three times over the last 16 years… It’s simply a great location for kite flying.

Until the next one,