All right, so we find ourselves loading the kite-van on Friday morning, May 11th – headed for John Barresi’s first “Instructing” engagement with the World Kite Museum. And, amazing as it sounds, we’re actually out of Portland in good time, with an easy trip ahead of us. Up I-5 about 40 miles to Longview Washington, hang a couple of lefts to re-cross the Columbia River, then a right onto US 30 out to Astoria, and then up Highway 101 to Long Beach – all a matter of a couple of hours easy driving. So we make it up there in good time, stop and see Kay Buesing to check in, and then go PLAY ON THE BEACH for a while… Life – as they say – is GOOD! 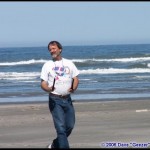 While at the museum, we happened to catch up with Ed Jensen, who was to be one of John’s students in the morning. We wound up with the three of us out on the beach together, John and Ed were swapping kite war-stories, Ed was asking a few early class-related questions about this and that… The evening found us out for dinner at a local Thai place after, so it turned out to be a very nice, comfortable afternoon and evening all the way around.

Anyway, when the sun neared the horizon and the wind moderated, we decided it was time to get off the beach and check in with the nice folks at Anthony’s Home Court, our home-away-from-home for the weekend. We were pleasantly surprised by the accommodations Kay had arranged. Though compact, our lodgings had a small kitchen complete with cookware and dinnerware, plus more than adequate sleeping arrangements – each cottage individually furnished with antiques and collectables, just like someone’s home. Nice place, and we were quite comfortable there. And the free Wi-Fi connection didn’t hurt us Internet “junkies” either!

After a decent breakfast at Debi’s in the morning, we were off to the World Kite Museum again, meeting the “class” at the museum at 10:00 to start things off. The class consisted of eleven students: 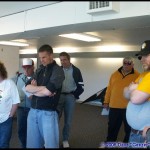 John played a few demo videos to whet student appetites, gave each student a CD or DVD which contained Randy Greenway’s trick tutorials plus some demo clips from the Kitelife site, and he also briefly ran through the course syllabus and talked about a few give-aways he was planning to award later on… Then it was time to hit the beach! 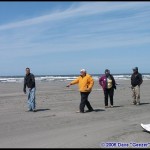 Well… Out on the beach, the wind was really a bit much for some of these fliers. Most of these folks were in the “intermediate pilot” range, having had some prior experience flying sport kites, but not much “trick” experience. Some had almost none, and a couple had a fair amount – but the “norm” was the “intermediate” tricking experience level. The class also consisted mostly of middle aged adults, with a few edging toward “old,” but no kids or young adults had signed up. Therefore, it was pretty easy for John to teach to a “common denominator,” which certainly helped both John and his students – though the winds being up in the 14-20 MPH range sure wasn’t helping them much. Still – they’d just have to work with what was available!

So John set up a couple of Flying Wings Acrobatxs, which would be the teaching-kites for the weekend, plus a New Tech Cherrybomb or two, and started in teaching. Barresi’s method would be to demo each group of maneuvers several times, explaining them as he went along – and there would always be ample opportunities for immediate, on-the-spot questions. Once the class was comfortable with the concepts, John would turn over the straps to a student for some one-on-one tutelage on the same maneuvers. When each student had enjoyed a chance to fly the maneuvers, he’d call them all together and then demo/teach the next set of maneuvers. 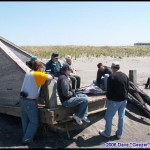 As a part of the teaching, John intended to bring out one of his competition kites to demo how some of today’s tricks could be flown and immediately managed a demo on how to shatter a leading edge spar on his mid-vent Sea Devil, right at the lower spreader, and put a 2” hole in the sail. YUK!!! Not quite the “demo” John had in mind! Still, the class was underway, and he soldiered on… John would demo and teach hands-on and the students would listen, learn, and fly. Me? I would hang out, help where I could, and shoot a few photos for this piece in Kitelife. And I might even fly a few SLKs if time and the wind permitted… 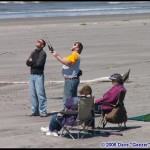 For all the students, the “Basic dual line flying” segment was all review of very familiar maneuvers, and everyone also got some “flight-time” familiarity with an Actobatx. The Intermediate maneuvers were also mostly student reviews – except for the parts about “Relaunching.” I saw several students studying the different demos and explanations intently, followed by the eventual “Ah HA!” epiphany-reactions when their turn flying the maneuvers occurred. They were getting into it now, and it showed how demo/hands-on teaching methods work. 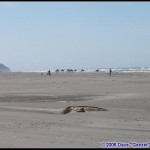 By about 2:30 or 3:00 PM, they had progressed through the “Open / Round table” portion of his outline, with several “interests” discussed, and then John pulled the plug on the class sessions for the day. The winds we just a bit too high for the class to comfortably learn the Basic Tricks segment, which was next on the course outline. Rather than subjecting the students to the exasperation of trying to fly low and medium wind maneuvers in high winds their first time out, and after a vote, John opted to dismiss the class early – promising an early start (9:00 AM) on Sunday, when the wind levels should be a bit lower.

Everyone wrapped up their own kites and line-sets and headed to cars with happy grins, and slightly sun/wind burned faces. It was working! And John and I wrapped up the teaching materials and headed for the car – and a late lunch – ourselves. We mostly spent the rest of the afternoon bumming around some of the shops in downtown Long Beach (all 4 blocks of it), and then went back to Anthony’s where John dove into Kitelife projects again, and I dived into a good book (wuz reading Harry Potter at the time). I can’t speak for my roommate, but I was asleep by 11:00 PM.

After clearing out of Anthony’s and a fine breakfast, this time at Laurie’s – John LOVED the “Garlic Omlette,” we met the class on the beach and the workshop started up again. Winds turned out to be much better this time, somewhere in the neighborhood of 2-3 MPH, which very gradually built up to the 12-14 MPH range by the time the sport-kite class ended for the day.

Sunday’s agenda turned out to be:

One of the prevelent teaching tools used on Sunday, John stretched out about 15′ or so of line and hooked up a kite… With a student on the handle end, he would explain a trick step by step, then guide them through the motion as he manipulated the kite to match. Crediting the technique to a workshop given by Ari Contzius at the 2005 NWSKL annual meeting, he found it to be very effective with this group. 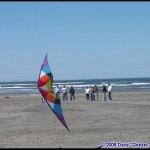 As you might expect, some of the workshop segments received heavy attention, and others were not so detailed. Still – the class worked, and “learned” their way through all of the segments by the day’s end. Different students found separate interests and focuses – areas they liked, areas where they felt like they needed work, and areas they did not care about very much. For instance, Marjorie Taylor had a list of five “Things to Work On” by the end of Sunday’s session.

And, having pretty much run out of spectacular photos to shoot fairly early on, I decided to throw a couple of SLKs in the air and tune them up. I was very pleased with my Premier’s Red Oval Roller on Sunday, but spent considerable effort – to no avail – attempting to get a Gibian Mandrill airborne and stable. I suspect most of the problems I encountered involved an owner (Me!) who didn’t completely understand the kite and the flying conditions. More work to do on that one, I’m afraid.

During one of the afternoon breaks, John raffled off a couple of prizes. Both Bud Root and Ed Jensen left with a new Flying Wings Acrobatx to take home, plus a one-year Kitelife subscription each! And everyone had their course materials of course, including the trick tutorial and demo CD or DVD.

And – after all was said, done, flown, discussed, and completely over – Barresi decided he really needed to fly just for himself, and after 30 minutes or so of good flying, he somehow managed to push the spine through the nose-webbing on his Standard Sea Devil. Oh well… (That’s two kites needing repairs, now – all in a single weekend!)

Well, ENOUGH, already… Time to wrap it up and leave the beach.

We stopped into the World Kite Museum as we left the beach of course, and were greeted by a delighted Kay Buesing and Sharon Absher. Kay’s opening statement went something like, “Well… I’ve heard nothing but glowing reviews, so…when do you want to do this again?” With luck, September will likely be the next available date to hold this workshop.

To be notified of scheduled workshops by the
World Kite Museum, be sure to visit their web site,
email, or call them directly!

Kay also happened to mention that she was “most interested” in the World Kite Museum acquiring either an original or replica of a “Weather Bureau Kite” – and especially something along the lines of a “Hargrave-Marvin” kite.

If anyone has any information regarding an existing Hargrave-Marvin “Weather Bureau Kite” or if anyone would be interested in constructing a historically accurate replica of this kite… Please contact either:

Kay Buesing by email at jkite@willapabay.org   – or –
Dave Shattuck by email at geezer@kitelife.com and one of us will get in contact with you.

Finally, it was time to take our leave of the museum folks and make our way over roughly 90 miles to Portland. Being present at Barresi’s first teaching effort was really a lot of fun – even as a bystander. And John’s reactions? Well, he was really quite pleased with how things turned out. His teaching methods seemed to be validated by the participants that turned out for this workshop. The museum was pleased enough to consider a repeat engagement – almost before the first session was complete. Also, there were some brand new fliers, so it seemed that they were reaching out to “new people” on behalf of sport-kiting – always a heart-thumper for the Kitelife core!

The drive back home was the proverbial piece of cake, of course. Barresi slept nearly the whole way! LOL