Tourists flock here in their thousands because it is one of the most beautiful places on earth. Now there is another reason—to fly kites! Actually, we who live here on the nature-blessed east coast of Vancouver Island have flown all along, but now with our own festival the word will spread. 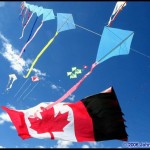 The First Annual Parksville International Kite Festival in Parksville BC, Canada, was enjoyed by hundreds on July 15 and 16. I have been telling anyone who would listen that we have in Parksville the very best flying field on Vancouver Island, and probably in the Province. A wonderful group of kiters arrived for the weekend to see if I was lying or not. 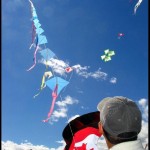 The weather was flawless, with sunny skies, but not melting heat. The wind was just the way we like it—nice and clean coming in off the water. True, it did get a bit gentle both afternoons, but hey—we can handle that. Nobody went home with sore legs from walking on soft sand, because we fly on nice clean lawn, right beside the open water. One of the really nice parts is that we get to park right beside the field, so there is no lugging of huge piles of kiting gear for long distances—just take it out of the back of the car and fly it. The city of Parksville even went so far as to buy an umpty thousand dollar Canada Goose pooper sweeper to keep it nice and clean. 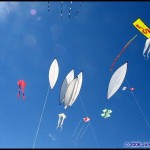 The event was organized by the Parksville Lions Club, with assistance from the British Columbia Kitefliers Association. The Lions did the hard work of putting up tents, finding sponsor businesses in the community, and doing publicity. We kiters sure do thank the Lions for having the idea in the first place, and for all their hard work making it happen.

This was an event for kiters and for the public. No high pressure Kitemakers competition. No mass ascensions. No big name featured guests. No sport kite competition. Just a bunch of happy kiters flying whatever they felt like, whenever they felt like it, with hundreds of folks from the communities wandering around the field with their mouths open, having never seen such a thing before. The sky was always full with a great variety of kites, and the ground was always full of amazed spectators. The ground had its fair share of displays too. 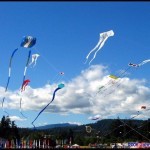 There were competitions, just not the sort of thing that we are accustomed to in most of our festivals. The city council of Parksville were the judges and you could often see one or another of them wandering around the field with clipboard in hand. Now and then they would stop to write themselves notes, or to ask questions of one of the kiters—whose kite is that?

The award for highest kite went to Neil Parmen from Nanaimo BC. He claimed 9000 feet. I don’t know about that, but I do know that nobody else was even close to his height. It takes me long enough to put stuff away without having to wind in 9000 feet of line!

Awards for the youngest flier went to Anthony Waldrop of Surrey BC. At four and a half he is indeed starting at the right age. The oldest flier was Nora Patterson from Nanaimo BC. At 88 she definitely had a head start in kiting on the rest of us flying that day.

Cliff and Gerry Pennell of Olympia Washington were judged to have the silliest kite—an award I suspect should be renamed as the most unique kite. Maybe next year. The largest kite was flown by Jeremy Perceval of North Delta BC. For the most colorful kite Paul Horner of Quadra Island BC took the honors, and first, second, and third prizes for best ground display went to John and Marzlie Freeman of Parksville BC, Jeremy and Barbara Perceval of North Delta BC, and Wayne Pattison of Surrey BC. 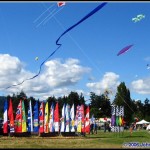 The Lions Club handed out right handsome medallions for the winners of these happy events. The Lions club had a tent where kids could buy a helium balloon (biodegradable, thank goodness!) with a capsule for their names and addresses. The object is to see whose balloon travels the farthest. No results in for that contest yet! As I mentioned—no high pressure competition, just good flying fun, with lots of laughs along the way.

Well yes, there was a Rok battle, with three heats. No clear winner, but that’s the way life goes sometimes. The Alpha-Bits, sport kite team from the Vancouver BC area, did their part to liven things up, with several demonstrations of team flying. The members flying as the Alpha-Bits were Dianne O’Brien, Jeremy Perceval, Cathy Jung, and Anthony Tung. 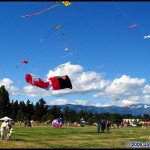 The schedule was very loose, as it should be when you are on island kite time. Saturday at one o’clock or so, was the Teddy Bear Drop. Cliff and Gerry Pennell, from Olympia Washington, ran this part of the show. Put a microphone in Cliff’s hand and look out—the shtick that rolls out kept the kids entranced and enthused for the twenty minutes that it took to drop twenty one parachuting bears. You just can’t believe the training that these bears go through! Well, at least that’s Cliff’s story, and who am I to argue? 135 kids registered for this event!

The kids’ kitemaking tent was in full swing both days. Joanne Lord, the BCKA member in charge of these things, brought along kits for 500 kites, and there were only 31 left when the smoke cleared on Sunday evening! Surely this must be a record for one of these events.

One of the sponsors much appreciated by all the fliers was Tim Horton’s, who brought us plenty of coffee and TimBits (sometimes known as donut holes to the uninitiated) and great muffins on the flying field. We had all this, and nice clean Porta Pottis too!

As with any first time event, we learned a lot. You just know that this means next year’s festival will be even better—and that will be going some!