Having drawn a complete blank on something “specific” to write about for Revisions in this issue (despite asking a couple of people for ideas), I’m choosing the time honored article style that I call “a quad potpourri”. There’s certainly been no lack of things going on in the world of quad kites, so, I’ll touch on a few of those things and perhaps by next issue, a magical idea will occur to me for a focused article.

While I am not 100% sure of this (and nobody has been able to demonstrate otherwise), as far as I know, England’s kite team, The Decorators, were the first quad line team in existence.

Beginning in 1988 as a Rok team at the annual kite festival in Bristol and moving to both dual line kites and then quad kites for team demonstrations, The Decorators essentially wrote the book with respect to what we know of as quad team flying (a big tip of the hat to Team High Performance on this as well however). Taking their flying all over the world to the delight of people at festivals, they have been the inspiration for any team that has followed afterwards, from FLIC, to the Flying Squad, to iQuad. I had long hoped to see them fly in person but, as the years have gone by, they have performed less and less, but, they have put in an appearance every year at Bristol, no matter what. And, this year was no different, once again The Decorators were out. But, this year, some camcorders caught the action and the rest of us got to see the event, which is great, because there isn’t much Decs video footage available on the net, as 19 years ago, the idea of having your own wee little camcorder and sharing the videos online with others was merely a twinkle in nobody’s eye.

Next year marks the 20th anniversary of two key players in this affair. It will be 20 years of The Decorators, but, perhaps more importantly, it’s also going to be Revolution’s own 20 year anniversary since the release of the Rev 1, the sport kite that changed the world. At the moment, there are plans afoot to hold the largest gathering of Rev kites at next year’s Bristol festival. While this is still early on in the planning stages, I’m inclined to believe this will happen and with some luck and the participation of others, maybe we can achieve the largest quad mega fly that the planet has ever seen.

Currently the record sits in Kasai, Japan with 43 kites at once, but, I feel that if we were to combine all the European teams, and some of the US/Canadian and Japanese teams, we can go well over this record. What a birthday party that would be! My advice at this point is to simply keep an eye on the various forums for further information but, I’ll write more about this here as more information comes together. It’s booked onto my calendar already, so pencil it in on your own as well of you think you have any chance of making it over.

Oh, and as a big plus, it sounds like you’ll have a few chances to catch The Decorators flying this year, so, with some luck, we’ll have even more video and pictures as the year moves on. Congratulation to Felix and company, and a big thank you as well.

If you have owned a Rev for any length of time and make a habit of changing frames on them regularily, one thing you will notice is that this can be tough on the venting that goes along the leading edge. Sooner or later, this will simply wear out and separate from the Dacron. But! I have a solution for this! John Barresi came upon a better way to remove a leading edge and I’m 100% convinced that if you do this all time, you’ll never see the breakdown in the screening. It’s a pretty simple idea and we are both surprised it hasn’t occurred to anybody before, so here’s the secret :

Voila. No bending, no scrunchscrunchscrunch, no trying to work the middle piece out and in the long run? No damage to your leading edge screening. Try it out, you’ll be pleased!

Off to the Races

The very first of these showed up at the Lincoln City Summer Festival (documented elsewhere in this issue) and they have now seen general release and availability over the summer. Race Rods!

What Revolution has done is to come up with a rod that is lighter than the existing 2 wrap rods, but, with a stiffness that is comparable to at least a 3 wrap rod, making for a frame set that’s extremely light but, not as delicate as using Indoor rods in your 1.5. I have entirely one word that I use to describe these rods and it’s “wow!” 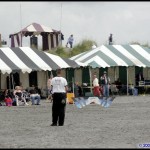 While they are not “unbreakable” they are much tougher than you’d think. iQuad has had a set in use all summer long and we’ve been bowled over with how well they are performing. To be honest, I don’t think I have flown on much else since I bought two sets for myself. I equipped my standard and vented B series with them and they have been fine in just about any wind I care to try them out in, to the point where my “main kit” now consists only of the two sails, two sets of Race Rods, and a 4 wrap center with two spare 3 wrap rods, just in case the wind is really strong. No more carrying around big packs of spare rods for me!

I’ll add that they also sport a pretty great logo, done by Barry Poulter, complete with flames, for that extra added performance boost and a small boost of overall sexiness. The whole kit nicely tucks into a purloined Prism Zephyr case, amking a very small travel package for me, wherever I go. I have been tempted to simply take this onto an airplane but, I don’t have much desire spending time explaining to the TSA whats in the case, so, into general baggage its gone.

I have never had as busy of a summer as I have had this year. By the time we wrap up for the season with a return to Lincoln City’s Fall Fest in mid October, we will have cranked out at seventeen festivals, from coast to coast, clocking in time at nearly all of the US’s biggest festivals, from Kite Party to Wildwood, Grand Haven, WSIKF and Berkeley, with many other smaller events in between. And the response to this has, quite franky, been overwhelming.

But there has been one key that has made it all that much more fun, and that’s been all the quad flyers we have spent time with across the country. Every event we spend time at manages to involve a mega fly and a lot of time spent flying with anyone that manages to show up with some 120 foot lines and that’s been a very rewarding experience.

We’ve seen the quad skill set quickly climbing at every event, even amongst people who at the start of an event would have said “oh, I could never do that!” This past year has clearly illustrated that in fact, yes you CAN learn how to fly quad in a team situation without anywhere near as much pain as you’d initially think.

Myself and all of iQuad would like to take this opportunity to thank every single person that’s come out and either simply watched, or, better yet joined in, it’s because of you that the events have been as fun as they have been and it’s really put a smile on our faces every single time we wind up another mega fly with new people in it. WSIKF this year was particularly interesting as many of the people that joined us in the previous year have been doing a lot of playing around with team flying in the year between and it really showed when we’d go up as a large group. Some of the mayhem and chaos we saw the first year has gone away, and people are flying with better confidence and having a ball at the same time. 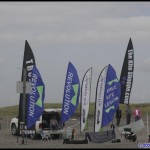 While all the people have been great to fly with, I’m going to single out two particular people, just because we have seen them at a few events and their growth shows every time we see them out. Jim and Lynn Foster, the “Kite Kids”. If memory serves me correctly, Lynn wasn’t even flying quad at WSIKF in 2006, it was just Jim having fun with us. But, by Kite Party, they were both flying together as a pair and by the time WSIKF rolled around this year, not only did they take the Senior’s competition flying as a pair but, both Lynn and Jim were out regularly for the mega flys and now participate in any mega fly that they can possibly show up at, all over the West Coast. They never fail to put a smile on my face because, I can see how much they are enjoying themselves. Thanks Kite Kids!

There’s one more chance to find yourself in a mega fly this year, at the AKA Grand Nationals, taking place just as we release this issue of Kitelife. Actually, two chances. John and iQuad will be holding a workshop on quad team flying where we will slowly take anyone who shows up through the basic moves that we go through in a given routine, spending time looking at the specific areas that can cause people the most trouble and hopefully, prompting more people to form quad teams on their own.

Also, this year, I’ll reprise last year’s Quadapalooza event which you can roughly describe as “the quad kite megafly” event at AKA. Same as before, show up with a kite, 120 foot lines and bam, you are in! Come out, have fun, say hello and fly the afternoon away on one of the best beaches in all of North America.

On that note, I need to start packing to go to Niagara Falls and immediately off to AKA right after that. Can I fit 10 days worth of stuff into my car? I’m certainly hoping so… I think next issue, I’ll title the article “Own Your Hover” and go through some strategies to help you over one of the bigger hurdles in advanced quad flying. Until then, may you always find a good wind and a great place to fly…