Last year, when I made my first visit to South Padre Island for their annual festival, I had the pleasure of meeting Tom Brailey in person for the first time. As I sit here again in SPI, I had been hoping to see Tom again, but alas, he was taken from us just before we arrived here. Below are some of the wonderful things said about Tom when we had asked for some tributes. 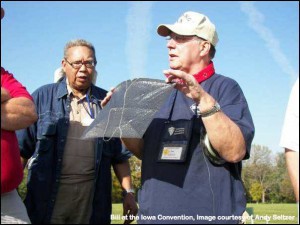 Fighter Kite flyers have lost a true friend. Tom Brailey has lost his battle with heart disease. He leaves a big hole to fill in our circle of fighter kite friends and enthusiasts.

He will surely be missed. Tom was a past region five director of the AKA, and a past AKA fighter kite chairman. He has written many articles for the AKA kiting journal. Worked with the Bandanna Gang on many AKA workshops. He helped introduce many flyers to fighter kites and all kites in general with his on field hands on workshops. For over twenty years he worked hard to help others learn the joy of kites, being an original member of West Michigan’s, first kite group,” Kite Club”. Tom was very active in the “American Kitefliers Association”, the “North American Fighter Kite Association”, and the “Bandanna Gang”.

Knowing Tom, he would like it very much if each of us as, “fighter kite flyers” would take the time to help and teach at least one new person to enjoy our sport and our little kites. When you do this he will be smiling down on you.

Tom a was a very close friend. We traveled together many years to conventions and WSIKF. He was one of the original four members of the Bandanna Gang. Tom liked kites and even more he liked kiters. He would rather teach someone to fly than fly himself. When I heard the news I felt like I was flying my favorite kite, and the line had snapped. As the kite rose I felt sad at first but as it rose higher and out of sight I felt joy, because that favorite kite would land somewhere and bring happiness to someone else. At his funeral there were about 25 or more kite friends. We agreed we would miss the broad smile, the big hugs, and the laughs that Tom brought us. He would want us to keep looking up, and having fun with kites……this is what we do best.

I feel so bad to get the news of Tom’s passing away.

He is such a good guy, a gentleman in AKA, and played Watermelon-taichi so good during our trip in 2003.

Please know that I have lost a very good kite-friend also, and my special wishes and comfort for Elizabeth.

Tom will always be remembered by Shude in China.