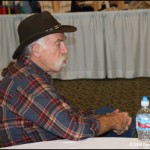 That would have been a ridiculous statement just a few years ago. About the only kites in movies then were in Mary Poppins, Bridge on the River Kwai, PeggySue Got Married or Waterworld. Things sure have changed. A major motion picture (as they say), with kites playing a central unifying theme through-out, based on a best-selling book by the same name, The Kite Runner, is playing in movie multiplexes all across the country right now.

Kiters in the SF Bay Area were recently treated to a Toyota Sequoia billboard featuring some local kite buggiers. What a nice surprise to be driving home from work and suddenly notice that image of yourself. Do you recognize yourself right away, or do you hesitate? “There’s something familiar about that billboard…” you might think. It probably takes a couple seconds to sink in… “That’s me! Cool!”

The Sharp Aquos 32” LCD TV was seen advertised this month on QVC with images on the tv screen from a shoot last June at Elmer’s featuring David Sabalino and Slawek (pronounced Suave-ek) Krause jumping their buggies and 2-wheeling across the lake bed. Landsailers were in the shoot as well and dean jordan became a landsailor (in 30 mph winds) that day!

Images of kites are selling insurance on television, along with pharmaceuticals and religion and cars. Not kite images from our childhood either. The kites I’ve been seeing are, more often than not, modern designs and doing a lot more than just hanging in the sky. These kites can zoom around and even pull people on surf boards and mountain boards and buggies!

Making a big buzz on YouTube recently, is a car commercial featuring two Audi’s driving down a road, flying a very large dual-line delta sport kite. Precise control, available with an Audi, is the idea, I believe. Car commercials have been incorporating aspects of sport and power kites for a few years now.

My point in all this? Simply that we live in a world that sees kites in a profoundly different way from when I was a kid. From basic single-line diamonds and deltas, our culture has grown to accept kites as a much more interactive hobby, a rapidly growing outdoor sport and increasingly, as power generators.

It is too easy, being in the midst of it all, to forget that kiting didn’t exist as a sport before we came along. Kites had become mainly a child’s plaything. The science of kites had been nearly forgotten.
We did this. We are the creators of a whole new perspective on kiting. By doing what we do… And having a lot of fun in the process, we have caught the eye of popular culture around the world. Now let’s get over ourselves and go fly some kites.