Ciao! Is the common phrase you hear in Italy, whether you are coming or going. It is an Italian word used as a greeting or parting: hello, good-bye, so long, see you later…as in the Hawaiian word Aloha. I must say, it comes in very handy having an all encompassing word like that.

Aquilone is the word commonly used for kite in Italian, although strictly translated aquilon means “the north wind”.

It was during the 28th International Kite Festival in Cervia Italy, 25 April to 4 May 2008 (dal 25 Aprile ~ al 4 Maggio 2008) that I learned these fascinating little tid bits of information. 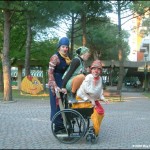 This most recent sojourn to Cervia was my fourth time attending this amazing kite festival. It is called “Artevento” and is truly an impressive art event. In addition to the unique and inspiring art kites there are fabulous ground displays, banners, and exhibits of all kinds.

The food, wine, and ambiance of the Adriatic Sea combined with the familiar and warm camaraderie of the tight knit kite flying community was intoxicating. It was still early spring, early enough in the new kite flying season for many people to be seeing each other for the first time after the long isolating winter…and thrilled about it! 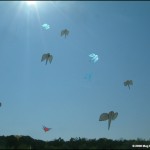 The Artevento history (per website) writes…”in 1981 Claudio Capelli, skilled as a fine artist, was with an organization that started the Cervia International Kite festival”. The website continues to say…”Since then he, his family and his friends continuously improve the environment that makes it possible for all kind of kite artists to meet together. Nowadays the Artevento Festival is an important International Kite Festival with the special atmosphere of friendship and creativity.”

Due to the continued growth and popularity of the Artevento the festival changed locations this year. They moved 6 kilometers down the beach to the Riviera dei Pini in Tagliata were the festival occupies 1500 meters of beach between the sea and the pine forest.
The 200+ international flyers were housed in various locations around town. Some of the flyers were in small privately owned hotels and some in rented apartments and condos. Riviera dei Pini in Tagliata is a lovely little seaside resort town on the Italian Riviera and the Artevento was the birth of the new season. 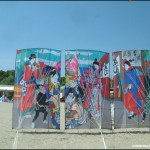 Over the course of the ten day event there were two Italian holidays, providing two, three day weekends, which brought many people to the festival in the seaside town. This swell of public was an appreciative and enthusiastic audience for the Artevento.

Each time Ray Bethel completed one of his magnificent routines of simultaneously flying three – two line sport kites, the public would raise both their hands over their heads and sway them back and forth to show their pleasure…instead of clapping…due to Ray’s deafness. It was a lovely gesture recommended by Claudio during his announcing of Ray’s demo. 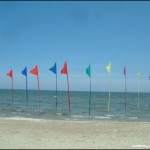 Artevento has built a very solid schedule of kite making workshops that have to be admired for its outreach program to the community. There were several (three to five) school classes a day that came to the kite field (beach) for kite making. They also held kite making workshops for the public over the two, three day holiday weekends.

The kite making workshop had a large dedicated tent between the reception tent and stage/sound system, it was filled with tables, chairs, and supplies, and that was decorated with many different kite artists kites. 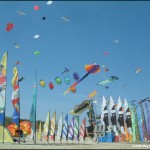 There are many kite makers, artists, educators, organizers, and flyers of all kinds from all over the world, who are anxious to give back to Artevento, and to contribute to the overall success of the festival. It is these dozens of kite flyers, who usually do workshops at home, bring supplies to donate along with their expertise and time to the workshop schedule.

One of the many things that strike you about Artevento is how well rounded and all encompassing the event’s entertainment is. The stage, used by day as an announcing platform for Claudio, is also used at night for a variety of entertainment.

Cervia’s 2008 guest of honor was a team of Maori (native’s of New Zealand) students who wore traditional Maori dress and performed their native songs and war chants. They were very impressive in their painted faces, choreographed drills and routines. Very large crowds surrounded the stage every time the daily performances occurred. 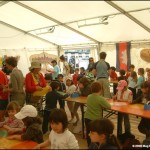 At the beginning of the festival the Maori teacher chaperone mentioned that she became aware of the kite making workshops done for students and was interested in knowing if her students could sit in on one of the workshops when they weren’t performing. Many of the Maori students didn’t own kites, never have, and they did not have anything with them to fly. 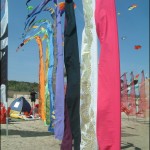 It was such a treat to see George Peters’ workshop, including his own special language- that I saw I was not alone in my enjoyment of his teaching style when I looked up towards the door and saw the cream de la cream of the kite world filling the doorway as they too were enjoying George’s antics. He showed that there is an art and skill to giving a good workshop, just as there is an art and talent to making a good kite.

This year, in addition to the music by live bands, there was a unique performance from Montreal. Vania Beaubien’s theater company “Theater Ciel Ouvert” and fellow actresses Isabel Rancier and Annie Valin wrote, directed, produced and performed a vignette titled ” LA MACCHINA VOLANTE”.

The play, wonderfully suited to all languages, had a kite flying theme. Their special appeal was universal to the international audience. In “La Macchina Volante” clown woman used their imagination and desire to fly to escape the big black hole. During their epic travels they fly like birds in their flying machines to exotic lands into their own paradise.

The kites used in the show were custom made for the performance by kite artist Robert Trepanier.

The theme of the night fly was “La Notte Dei Miracoli – tribute al mare”, which translates to the “Miracle of the night – tribute to the sea”. Just as Cervia the international kite festival is like no other; their night fly is unlike any other night fly. 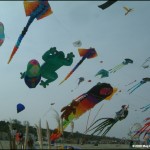 The ground displays of the night performance are as important and as prevalent as they are during the day fly. There is numerous beautiful lighted display using hundreds of small tea candles, burning torches, large sparklers, all manners of fire displays; along with nice large professional spot lights trained on the sky catching colorful glimpses of the kites flying over head.

A portion of the official printed program dedicated to the evening show translates to read; ” in the night of miracles a new one is given off that it leave from the spirit of the present artists to the festival and blows towards the sea”. 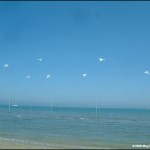 You should definitely go to http://www.artevento.com click on the top right tab marked “MIX” and then click on “Reportage 2008”, there is a group of various attendees photos to view, including some nice shots of the night fly and night ground displays. The photographers who contributed their shots have done a remarkable job capturing the essence of Cervia.

“C’e un posto nel mio cuore dove tira sempre il vento” written by Claudio Capelli translates to read “there is a place in my heart where the wind is always blowing.” Cervia is a remarkable event driven by the passion of a remarkable man.