Saturday morning dawned and sitting down to “cafelito” – a sort of first breakfast, I watched the lamp post outside the window swaying around in the strong blustery wind.  Flying was going to be tough.  At 9 am we headed on down to the beach to meet the fliers who had gathered from all over Spain to take part in this the first Rev Clinic in Spain.  I had stayed with the event organisers Pedro and Esteban Gonzalez with most of the other fliers staying at the Hotel Biarritz, just a stones throw from the beach.  As we slowly started to gather on the beach there was a buzz of excitement in the air.  People from all over Spain were meeting again for the first time this year.

Although it was very gusty, the sun was shining and at 10:15 the pilots briefing began.  During the briefing, Team Bolau, who were hosting the event, gave out badges each with a number on the back.  More of that later. 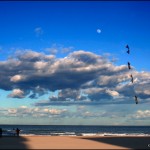 The plan for the day was to split the fliers into novice, experienced and advanced groups with a member of Bolau with each group to provide expert advice.  As we separated out to different parts of the beach there were smiles all round.  The excitement levels were building.  It felt like a family Christmas but without the fighting!

The rest of the morning was Revs, Revs, and more Revs.  There was a 10 person team here, pairs and individuals there.  Members of Bolau provided help where needed and inspiration to the rest.

With the wind blowing from 8 – 30+ mph there were a whole range of kites on the beach from factory made vented kites to some unique home builds designed to fly in the strongest of winds.  It seemed that the difficult wind conditions were only making people more determined to have fun.

By 2pm I was getting a little peckish but mealtimes in Spain tend to be a little later than in the UK.  I soon saw people packing their kites away and assumed that we had finished early for the day due to the wind, but no it was time for lunch.  All 52 of us headed off to a local restaurant where the world’s biggest and tastiest paella was waiting for us.

After 2 hours, beer, Sangria, desert and coffee we all made our way back to the beach for more flying.  The wind had eased off over lunch and with the sun still shining a more structured session took shape.  I had the pleasure and privilege of helping a complete novice go from first contact to good control in just an hour.  The look of achievement on her face was worth going for.  It seems that some people really do have a natural affinity for the kite.

After a short trip back to Pedro and Esteban’s Kite workshop with some of the kiters it was back to the hotel for dinner.  More good food, beer, wine…. well you get the picture.

Now by this time I am starting to flag, but this is Spain and starting to eat at 10 is the norm and partying till much later expected.  So after the meal we all headed to the hotel lounge where the reason for the numbers on the badges became clear.  Revolution had kindly sent over some T-shirts and a Rev Bag as prizes for the event.  In true lottery style, numbers were drawn from a bag. and the delighted winners went up to claim their prizes.

At midnight I persuade my host to take me back to the house but the locals continued on with a seminar hosted by Bolau late into the night.

Sunday dawned bright and breezy but there was a slower start down on the beach.  Kite choice was difficult; it was either SUL, or Vented and frequently both at the same time! I took out my “Bazzer” Twister Rev and this seemed to do the trick but all around me were an assortment of vented and mega vented kites.

It quickly became clear that a mega team was the order of the day.  Our first attempt was enthusiastic but with only 6 experienced team fliers in the line up, it was decided to split us up into three groups to practice the figures first.  We chose three figures to fly, bursts from a ball, V to Mountain and pin Wheels.  Fernan (Bolau) took a group of six fliers, Tonet (Bolau) another 5 and I stayed with the remaining 5 in the centre.

After some skilful tuition from the members of Team Bolau and very quick learning from the fliers we were soon ready to try the mega team again.  And the result… complete success.

I was lucky enough to lead the mega team having had some experience in the past.  I did my best at calling in Spanish and the fliers were very understanding but I suspect it helped that Jose-Luis and Natty were translating for me.

After the mandatory group photo’s we packed away the kites and headed to the restaurant again for more paella.  After another 2 hour lunch break with great company the fliers started to depart.  With a six hour drive in store for most of them I didn’t envy my fellow fliers but they all left with the same broad smile I had seen all weekend.

So, many thanks to all the fliers who made me feel so welcome, to Bolau who worked so hard at organising the fliers and providing coaching and to Pedro and Esteban who organised the hotel, food and liaised with the local council.

There was a strong and sincere desire to do it all again next year.  If the event is run next and you can get to Spain, then to Spain you must go.  I will see you all on the beach.

Look for the bonus photo gallery, bottom of the issue index!