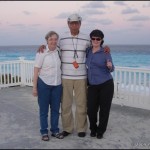 Charles and Dorothy Stewart were the most wonderful hosts.  They have been going down to Cancun for some years, and know the area quite well.  It was great fun.  “Navigator ON”  (That’s Dorothy helping Charles with directions.)  Why were we here?  The first Isla Blanca Festival de Papalotes  (Kite Festival) and it was fabulous to me. 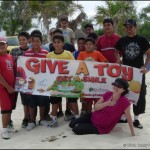 Nancy Meyers and her husband Andy do quite a bit of charity work with friends.  They worked with Charles, Dorothy, and who knows who all, because I don’t. I just knew that I was lucky enough to be part of “Give a Toy, Get a SMILE”. Our goal – to start an annual kite festival for a good cause.

We took time to check out our fly area and I was impressed. I’d never experienced white sands that didn’t get hot to the touch.  Nevertheless, it’s true.  It was white cool, velvety soft sand that felt so refreshing, even in the 80-degree salt air.  It is a spectacular beach, with the ocean on one side and a large lagoon on the other. 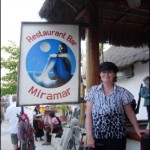 The first day the Stewarts toured us around, taking us on a foot ferry to Isla Mujeres.  There their favorite Restaurant on the island was  “Miramar,” It had a “Mermaid” as their logo.  Of course, I liked it right away since mermaids are in my kite skit this year. Besides, what was not to like?  The blue skies, shimmering dancing ocean waves, warm sea breeze and live Mexican music.

We walked part of the Island, and the two pointed out the changes over the years.  Progress and weather have made themselves known.  It will be interesting to see how it changes in the next few decades as like most of our beaches they are shifting.

On Saturday, we loaded up our vehicles with the help of Sylvia and Jesus to carry our gear to Isla Blanca.

Restaurant Acapulco’s owner, Senor Ramon Navarro, hosted the event.  He provided the beach, delicious food, and even free food for one of the local orphanages Thank you Senor for your generosity.

It was only the 1st festival, so it only had a few kites- you know, a few soccer balls, a few large deltas, a few small deltas, a few large flow forms, butterflies, UFO’s, spin sock, gecko and of course… a Revolution kite.   However, I screwed up big time.  I waited till the last minute to grab my Rev II for high wind only to find it was not in it’s spot. I had forgotten friends had carried it home wet and muddy for me. It was to late to retrieve it now and what a shame, it would have been well used in the high winds we experienced. I was so embarrassed, but the Rev standard in my bag had quite the work out. 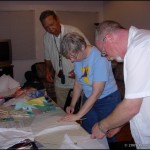 Oh, we met wonderful local kitefliers.  I wanted to bring them all home with me!  Ceri and her husband Roberto especially. Roberto makes and repairs kites.  He had a powerful Dual liner for the strong winds.  Roberto also built his buggy.  I wish I had taken time to go and see it.

We had the pleasure of meeting the owners of the Icarus Kiteboarding School right up the road from our beach.  He flew my Rev and we discussed the differences in our kites.  The kiteboarders were out in the Lagoon on both days.  By the end of the weekend, Oscar and Augustine, two local kitefliers, were all smiles when they told me they had decided to return and take kiteboarding lessons.

Dorothy had taken a Spanish speaking class.  She was so patient with me trying to learn.  I practiced my Spanish, while some practiced their English with me. It was a blast and the important thing is I learned “izquierdo- left. Derecha, right,  Ariba… up, or forward.    debecho- down. And most importantly – Alto! – STOP!   A wonderful word to know when giving a Rev lesson.

The little ones didn’t know left and right, so I said.. aqui- alli.. here- there ~ simply flying side to side.    I’m serious when I say that even though I had some good flyers of all ages try my Rev. kite, little 5 or 6 year old Rosita did the best job.

The local kids and the local orphanage came to fly, enjoy a day at the beach, and the opportunity to decorate and fly their kites. They reached in a box and chose a toy, Not a bike, or a game-boy, but inexpensive hand toys. They were so appreciative.

The Restaurant Acapulco fed us all with wonderful fresh food, guacamole and beverages.  Rumor has it that if you wanted a meal of fresh fish, it would take 1 1⁄2 hours. I’m not sure if they actually caught the fish at that time, but the platters they brought out for those who ordered it looked spectacular and it was agreed the food was good.

If you want to stay in a all inclusive hotel, fine, Cancun has those and even though they are great fun, they are pretty much the same everywhere.   But, if you would like to experience the beauty, the art, and the people of Mexico, contact Charles Stewart. He’ll steer you in the right direction.  I guarantee you would have a fantastic time.