Newport Kite Festival was revived after a couple years off.  Previously ran by Sue Moskowitz and Steve Santos of High Flyers Flight Co,  this year’s “show” vision was successfully done by Scott Weider and Ron Kitt of Kitt Kites.  Kites flew high and proud all weekend as the weather was perfect!  The main demo field was just that.  The entire weekend consisted of  demos to entertain and, in a few instances, teach …. giving a basic understanding of various aspects of kiting to the spectators.   Three different quad teams performed with the Rev Riders, making their debut.   There were fun things for the kids to enjoy; and they did!  Flyers from as far west as  California and East to Taiwan and south all the way to Florida made it here to share in the fun.

Before the weekend “officially” started,  I was lucky enough to enjoy great flying with my good friend Rich Comras and Ben Dantonio.  Friday evening, we were entertained with indoor flying routines for three hours.  What a treat from Litsong Lu  of  Taiwan’s iSpace … even though  I didn’t win the raffle for that really cool kite!  😉

Sue Moskowitz, Steve Santos and Dave Simpson of the original “High Flyers” came out of retirement and did a beautiful quad routine.  It looked like they didn’t miss a beat from their earlier days.

The main single line field behind the retailers’ tents is where the SLK’s filled the sky.  Kites of all shapes and sizes, from small deltas to a big cat flew beautifully against a deep blue sky.

The demos, which were the main event throughout the weekend were entertaining to watch by all.  Joe Perron did  his “one man kite team” as he flew his three kites.

There were many dual and quad line sport kite demos.  Some of the pilots included:  Wen Jeng of Taiwan, Jim Cosca of Skydog Kites, Ian Willoughby and his mom, Lisa.  Jackie and Dick Maciel, Steve and Sherri Pigeon, to name a few.   There was also a couple stacked kite demos, including one from Joylene DiNizio.

Robert “Woody” Woods and  Manny  and Jeremiah Alves did a  fighter kite demo.   A rokkaku  battle where the general public was invited and then instructed on how to do battle with the rokkakus was well received…  kudos to Glen Davison.    There were demonstrations on  power kiting, kite boarding, kite buggying and even a bit of kite jumping.  This was demonstrated by  Chris Shultz of HQ Kites and Paul Laurence, representing Kites over New England (KONE).

Tim and Sue Boyle demonstrated how to properly and safely set up and launch a giant kite, specifically, a 252 Sutton Flow Form.

Most importantly, to the kids that is, were the candy drops.   Throughout the weekend there were quite a few.  A special mention to Gary Quinton, KONE president, Ralph Reed,  Paul Berard, Richard Amirault for taking the time to do this! 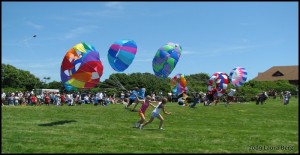 The other exciting event for the kids was the bol races.  With the weather being spectacular, the backdrop of bright blue skies enabled me to get some really pretty bol photos (IMHO). 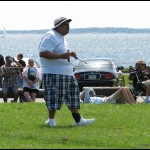 Ben Dantonio of Revolution kites flew in from sunny California and was welcomed with classic New England summer weather.  It was a top ten weekend of perfect weather and wind in Newport…. It was that SWEEEEEET!!!!

Thank you to all of the folks behind the scene, the organizers  and the many, many spectators that shared and enjoyed  a  great weekend.   Even though I’m fairly new to kite festivals, in general, I can tell you that this event was quite special.  I haven’t  seen an event where the pilots get to “strictly” strut their stuff as they entertain.  It was totally cool to see thousands of people sitting down, picnicking and thoroughly enjoying the show.   I can’t wait to be part of it again next year.  I’m confident that it will be even bigger and better . 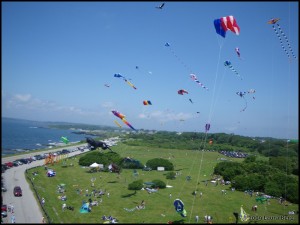 I have to mention that Brenton Point is amazingly beautiful.  From my KAP shots, you can see how it’s surrounded by water on three sides.  Perhaps I’m partial to any locations near the water, but this place is stunning!  I can’t wait to go back there.