Holy smokes was it cold this morning! While there were rumors of impending snow, the skies managed to stay pretty clear for the better part of the day… Indeed, it was quite cold with 30 degree weather, down as low as 17 degrees with wind chill, yet everyone who made it out to the field clearly had a wonderful time in what proved to be somewhat turbulent but sufficient wind, enhanced by the relative absence of competition today and a decent influx of general public.

Indoor workshops for the day included “Kites in the Jaguar World” by Rick Kinnaird, “Judging Handmade Kites: After the Competition” by Steve Ferrell & Co., “M…m…Miniatures” by Corey Jensen, “Hatteras Island, Nights in Rodanthe & Avon & Buxton” by Rick Kinnaird and “Miniatures” by Charm Lindner, all well attended considering the total attendance here in Rochester.

Out on the field, attendees set up their ground displays for judging, sport kite pilots flew demonstrations and gave lessons to spectators while other folks engaged in a Rokkaku battle over on a neighboring field.

As the banquet was getting ready to serve, an indoor miniature mega fly was held using a design by Susan Skinner in honor of miniature master Charlie Sotich, nearly everyone in the room lofted “pop can” style kites into the air, a total of 149 participants which is reportedly a new world record.

Only because its closest to my own heart, I’ve listed the final top three placings from the sport kite competitions and special awards, but for those who are interested in single line, kitemaking, fighter kite, rokkaku, best banner and ground display awards, etc, you should be able to find them on the AKA web site very, very soon… I do however have the Members Choice and Grand Champion recipients listed below, truly superb recipients as well! 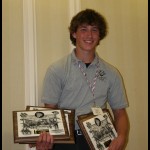 As you’ve seen above, both dual and quad line masters class was absolutely dominated this year by one of the youngest sport kite veterans in our history, Zach Gordon… At 17 years of age, he already has 11 years of sport kite competition under his belt and has earned EIGHT masters national championships as an individual, along with a respectable share of championships as a member of both pairs and teams.

On a non-official note, Team Chicago Fire repeated their annual tradition of recognizing their team member with the most broken spars during the year and in first place with a whopping 1,003 rods broken (inside story) was Russ Faulk who stood on stage to sing a moving rendition of “Little Tea Pot” to much laughter around the room.

Each year the AKA recognizes various members with special awards, some of them for lifetime contribution to kiting, the AKA and our community as a whole… Some awards are for individual efforts as artists and volunteers, some for representing and helping the AKA, and for everything in between (there is a full description of each award and the criteria – all can be found on the AKA web site).

As some of you know, I was honored with the AKA’s highest award, Steve Edeiken Kite Flyer of the Year in Gettysburg (2008) and it was a distinct pleasure to announce David Gomberg as the recipient this year, making it the second time he has been recognized with this particular award in two decades (1994/2009)… Having known David for nearly 20 years myself, and being quite familiar with his many significant contributions to the recreational, sport and business sides of kiting, it was very emotional for me and only elevated from there when he honorably and humbly declined the award acknowledging the significant contributions of his fellow nominees Bill Bigge and Steve Ferrell who were invited to come up and accept the award as co-recipients instead.

There is so much one could recount about all three of these individuals, and I can’t do them true justice here… Simply said, David Gomberg has been highly active in unifying and promoting kiting globally for more than twenty years with ten of those spent as AKA president, Bill Bigge is a renowned physicist and engineer who can be credited with many innovations and inspirations in kiting and aerodynamic design for well over fifty years, while Steve Ferrell has been a key component in the development of kitemaking competition, kite designs and as owner of Kitebuilder.com which provides a valuable kitemaking forum as well as materials and supplies… Understand, this is a mere smattering of the contributions each of these individuals have made to kiting over the years, not even a scratch on the surface, but it’s the grace and mutual respect which struck me with awe tonight, truly inspiring. 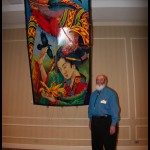 Many fine people were recognized this evening, each for outstanding efforts or creative expressions… Notably, John Pollock entered an elite list of those who have been awarded with the Lee Toy Award, People’s Choice and Grand Champion all at the same in AKA Grand Nationals, wowing everyone yet again with his bold and unique painted kites.

Was the wind and weather perfect in Rochester?  No.

Was it a tough year for the AKA?  Yes.

Did family and a desire to evolve prevail?  Yes.

Did we have an incredible time? YES!

I’ve said it before, I’ll say it again… To taste and experience the history of kiting, to meet and gain inspiration from those who have helped shape it, to see what makes this such an incredible community and pastime, there is no better example in North America than the AKA Grand Nationals and I heartily encourage each and every one of you to look at putting Seaside (OR) on your calendar for 2010.

Thanks for reading these updates, it’s been my pleasure to try and bring you along for some of the ride here, and we’re ever grateful for your ongoing support.