Whether the Marconi-rigged kite actually gets added performance from its overlapping jib and Venturi slot is questionable. However, there is no denying that it is a spectacular looking creation. This is especially true of the Four-Masted Schooner by Arthr Kurle*.

It can also be said that the construction is rather complicated. One might hesitate to risk so much labor, time and material in real gung-ho kite building for fear of loss or damage.

Stacked Deltas is an attempt to create the appearance of the Schooner without the complexities in construction. I decided on a three-cell box of this size to limit the wing spread so the spreaders could remain light. Food storage bags in Mrs. Thorburn’s kitchen seemed a reasonable size for the cells, though the design should lend itself very well to other coverings, such as rip-stop nylon. An aspect ratio of two to one looked pretty rakish in my drawing, and I came up with nice even measurements of 12 and 24 inches.

I think this kite also has its own Venturi effect, though I haven’t been able to test it in a wind tunnel. In ordinary flying, though, it is good in both light and strong winds, flies at a high angle while keeping the string taut, and shows no annoying idiosyncracies in flight. 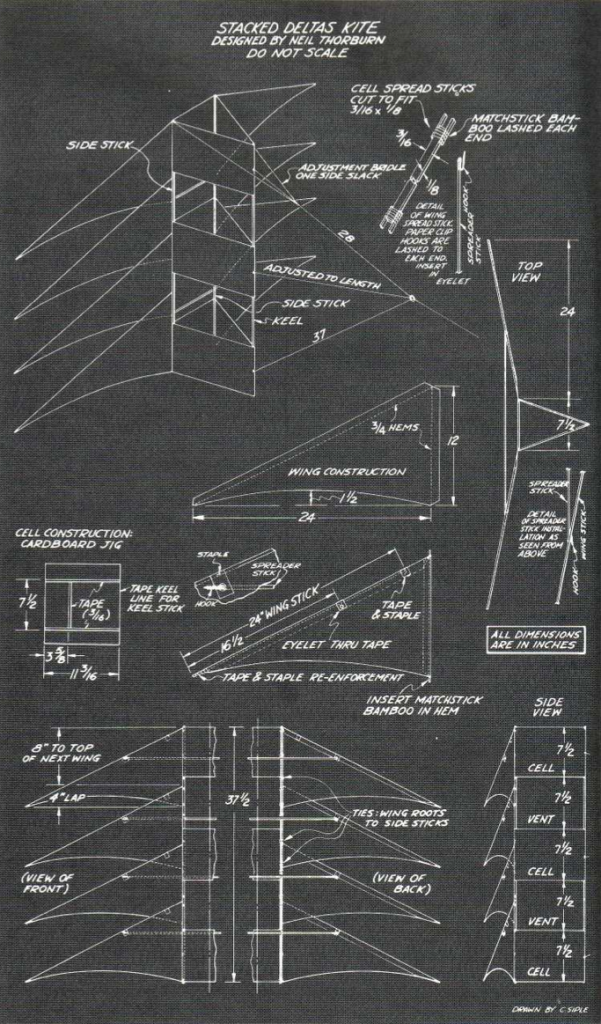 This kite is a good performer in winds from 3 or 4 miles per hour, and the nice surprise is that it turns out to be an excellent strong wind kite, flyable in velocities as high as 25 miles per hour. It will achieve vertical flight in thermals and hold up a lot of string.

Though right now Stacked Deltas seems like an ultimate design, next year I might come up with another design to make me neglect this one.
Of course, variations of this plan can be made with wings of different sizes on the same kite or a different number of wing sets than four, such as…

This article was reprinted with permission from Volume 1, Issue 4
(Winter 1977-78) of Kite Lines magazine, available in our archives.