Once again the city of Berck Sur Mer received kitefliers from all over the world, especially because it was going to host the World Sport Kite Championships of dual line kite teams. Berck was the birthplace of this championship, overviewed by the IRBC (International Book Rules Committee) and is nowadays held every two years at this city of the north-west of France. This time, eight teams from all around the world attended to show their skills representing Argentina, England, France, Spain and United States.

Unfortunately this time we couldn’t have the presence of Colombia nor from Japan, home of last years World Champion team Air-Rex who were unable to come and defend their title for 2010.

The festival took place from April 10 to 18 with approximately 700,000 people in attendance. As usual, the French public behaved splendidly, supporting the kitefliers through the whole week and giving an amazing color to it. This time, the podium belonged to England and France, being at the top Scratch Bunnies, closely followed by Red Bull Kite Force and thirdly, but not less deserving, Start Air.

The staff selected for this championship was:

The teams that competed were:

We also counted as well with the presence of a Russian delegation who carried out the work of shadow judges in order to bring the experience to their country and possibly begin to actively participate as judges in the next World Sport Kite Championships.

The city was not only a place where the figures and ballets performed by the teams filled the sky but also had performances of for line teams, large quantities of giant kites, dual line individual demos, Rokakkus’ battles, aerial photography and many other things.

This year the festival was favored by the climate, which facilitated the task of the pilots and remained with pleasant temperatures and sunny most of the time. The wind, however, did not accompany us during the first days and it slightly improved towards the week.

There were many demonstrations in addition to the championship and every day at noon and at the end of each day Megateams were performed by all the teams.

This time we bring something unique, a video of a Megateam seen from the angle of the pilot. This kind of flight is very fun, difficult and fantastic for the public to see. The two-line Megateams with so many kites are very difficult to perform and it is generally a probe of the high level that the teams have due to the complexity that requires.

This year, because of the wind, was not an easy competition. It, during the first week of the festival, did not help us. It came from the city, where buildings are, and the work of the pilots got very complicated because of the gusty and changeable wind. Its intensity varied greatly according to the days, on one occasion we had less than 4 km / h in parts of the field and in others above 14 km / h. We were all very surprised but each one of the teams did a great job no matter the wind conditions.

Poor wind conditions resulted in that during the three days of competition, the positions and scores changed a lot. These differences were also on the same day between the disciplines of Ballet and Precision. Despite this, we can observe that Scratch Bunnies had the best Ballet to the judge’s eyes and that Red Bull Kiteforce had the best Precision of the competition. Additionally, Start Air had the best balance between the two disciplines and each team gave a part of them to make this a real World Sport Kite Championship.

As usual, the first weekend was used for team and other participants to demonstrate their skills to the large public that attended from the start of the festival. After the opening of the festival, the teams had Monday free to train for the long-awaited day of competition. It was a very impressive spectacle to see eight teams from around the world, of different ages, with different languages training tirelessly until afternoon on a painted background with sea and inflatable kites of all kinds, shapes and colors. Each time we can see at Berck more and varied designs of this giant kites. This year a large amount of these kites painted the sky thanks to the people of Al-Farsi who came from Kuwait with an impressive amount of them.

As the days went by, we began to feel more and more the nerves. Nobody knew how the wind would behave in the competition, but one thing was certain: no one wanted the wind we were having by then.

The big day arrived. In the morning, the judges and the pilots had a meeting to know which would be the Compulsory figures for that day. Once finished this meeting some teams went to make some more test and then the competition began. The first day of competition was not very good, teams had some difficult to make their performances due to the bad wind. The other two days the activity developed quite similar and the wind did not improve.

Finally, the final scores of the competition were: 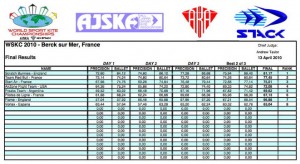 (competitors flew on three different days – these are sampled performances)

Once finalized the competition, the rest of the festival was dedicated to demonstrations. It was remarkable to mention the presence of four line teams who attended: Bolau, Crazy Drivers, Decorators, FLIC and The Flying Squad. It was also very impressive to see the Revolution Megateams that took place, which made innumerable maneuvers in the sky of Berck.

On Friday night all participants joined together to enjoy a very pleasant dinner with view to the sea and where it took place the award ceremony. On Saturday night there was the firework show which was complemented by a narrative and a superb acting on the beach. Of course the kitefliers joined it with lots of fluorescent kites decorating the sky. And so the festival came to an end, the last days we had the best wind conditions and the largest attendance of the public. Berck was truly a party. Families all over the place, kites across the sky, good weather and good wind.

A new edition of the Festival Rencontres Internationales de Cerfs-Volants came to an end, as well as a new edition of the World Sport Kite Championship. But Freaks Teamonce again we return home with the promise to come back for the next championship. Congratulations to everyone who made possible this dream that continues growing.