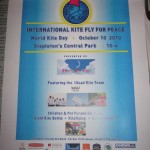 25 years ago, a simple event took place. Jane Parker-Ambrose presented a kite to the Soviet Women’s Peace Committee in Moscow, just in advance of the historic Reagan/Gorbachev summit meetings that eventually led to the breakup USSR/Soviet Union, becoming the individual countries that we know of now, and the destruction of the Berlin Wall that had divided East and West Germany since World War II. The simple gesture was written about all around the world and the following year, more than 10,000 people in 10 countries began what is now known as “One Sky, One World”, meant to promote peace and understanding through the simple of act of flying a kite. Taking place on the second weekend of October, the event has become worldwide phenomenon, taking place in dozens of countries around the world with 1000s of people taking part. More information on the history of the event can be found on their web site :

For myself, I have made more than a few of these in Vancouver but, for the last few years, it has usually found me on the beaches of Lincoln City for their Fall Festival. Which has always been fun, don’t get me wrong, there’s no inherent complaint in that, its simply how it has worked out. And regardless, the idea and thought of One Sky One World was always on my mind on the Sunday even if it was not one of the “official” events. Actually, while I mention the “official” events, here is the web listing of just where it took place this year:

Just amazing really when you sit back and think about it, that all over the world, people are flying kites with the same thought in mind, peace.

So when the supreme iQuad leader phoned up in the early summer with the idea that we might be invited to go to the 25th Anniversary of the event in its home location of Denver, Colorado, I was all over the idea. Yes please, let’s first confirm that Lincoln City won’t be miffed with our absence from their festival, and then ya, let’s go! Nothing like a truly unique event to get excited about! Alas for me, my trip to Malaysia essentially wiped out whatever days off I had left from the 9-5 job, meaning I could only pop in on the Saturday morning but, given it’s a one day festival, that worked out ok. But, I did miss out on one event that weekend because of it.

Many of us as we are starting to fly kites become familiar with Denver for a specific reason. We are wandering through a kite store or browsing online and we come across the Into The Wind store. For my part, when I first started flying in 1995, I remember having their huge catalog of kites handy, always pouring through it to see what I wanted to add to the collection next. For many people, it was undoubtedly their first exposure to the wide world of kites and all the differing kinds that are available. Thus, Into The Wind’s store has become a rather legendary place. So, on the Friday evening, the 5 of iQuad who had managed to get into Denver extra earlier, trekked up to the store for a look a around.

Me, I just wanted to walk around that legendary store but work called so, my trip started out bright and early Saturday morning with a quick blast down to my second home airport, SeaTac. It’s a short flight over to Denver from Seattle and once I rolled out into the arrivals area, there was John, ready to drop me into a waiting car so we could head off to the field and do some flying. Nicely since it was such a short trip for me, quite literally in on Saturday, out Sunday night, I had only a knapsack with me. What a joy when compared with all the stuff I had to haul around for my trip to Malaysia the week before!

And what a day it was, it was just gorgeous outside on Saturday. A beautiful sunny day with a decent wind blowing and NO AGENDA! We simply rolled up to the park and had a nice day of flying for fun on a nicely maintained grass field.

And there was even a pond to play around in as well! It was a really fine day to be a kite flyer in Denver. John got his new Kymera dual line out for a while and we all took it up for a swing through the sky, mixed in amongst lots of quad team flying as well. At one point we were sitting on the edge of the pond and I nearly fell into it by leaning a bit too far back. Al Sparling was also in attendance and managed to dredge the same pond a few times, much to our utter amusement.

That evening, we headed off to a great dinner with Jane Parker-Ambrose, her husband and co-organizer of the OSOW event, Larry, as well as a few more of the volunteers and invited guests. A perfect end to what was truly a perfect ay of kite flying.

Alas, Sunday started out as a grey morning with a reported threat of rain but, obviously, this certainly didn’t deter us from heading out regardless. And for the most part, the day remained dry but grey from start to finish with only a little actual rain in the middle of the afternoon. Not ideal conditions by any stretch but, what are ya gonna do? You make the best of it and enjoy the day anyways. Which is exactly what we did! One thing that was a lot of fun was checking in with Robin Allen McCracken who had setup a video link via Skype to other One Sky One World events that were occurring around the world.

How’s that for a feeling of togetherness and worldwide brotherhood? Nicely done Robin (and thanks for all the help during the weekend!). The wind had picked up quite a bit at one point during the afternoon so we got John’s dual back out and tried to see how it would handle high winds despite not being vented. We sat and snickered, placing bets on how long it would be before it imploded mi air but, in the end, we ended up disappointed to a degree, the Kymera held up quite well despite John being at nearly a 45 degree angle at some points. Pretty tough kite! While we didn’t get to fly as much as we would have liked, we still managed to have some fun.

One thing to note, Dreamworks was there promoting their (hilarious) movie “How to Train a Dragon” and one of the promo items they brought along for this were plastic Viking helmets complete with two horns. To all the other quad teams out there, take note of this!

They are a poor idea to fly team with these on your head. It was pretty hilarious to watch as we got all caught up on each other’s heads with the pointy little beasts. We learn the stupid lessons so others can learn from our misfortune!

And right towards the end of the day, the weather did break a little bit, allowing us to fly the last 6 person routine we’d get in for 2010. A fine way to wind up the event and with the exception of a smaller crew for AKA Nationals, the last iQuad event for the year. Once we’d packed up, we all headed back to the airport to bid Denver a fond goodbye. Me, I headed back to work while others headed off to Seaside for the start of the AKA Grand Nationals. All in all, a fantastic trip to the mountain paradise of Denver, Colorado and it was truly a joy to be a part of the 25th anniversary of this auspicious event, thanks to everyone who made that possible and hopefully we will be back again next year!