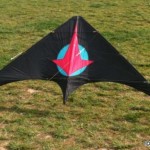 Back in the early 90’s, the Star Watcher by Jordan Air was one of the best loved kites on the field. If memory serves, it was even featured on the cover of American Kite Magazine.

Things were different in the 90’s. When people made copies of kites, they did so in jest, rather than to save a buck or build a business. That’s how the Star Farker came into being.

As best as I can remember, the Star Farker was made by Mike Simmons to poke some good-natured fun at Dean and the Star Watcher. The colors were awful, the sail was unbalanced, and the fittings …. didn’t fit. The kite was offered up on stage at the Wildwood auction. Jason Benedict and I were the auctioneers and everyone had a good laugh.

Little did we know…

The kite ended up in the hands of Lee Sedgwick. Lee made some “improvements” and then donated it to AKA. That Fall, we sold it again at the Seaside Convention. The understanding was that the kite would be kept for a year — like a traveling trophy — and then returned to be auctioned again. Everyone added a little something of themselves to the package. And that, friends, is how legends are born.

I’ve had the dubious honor of selling the Farker more than a dozen times. Sometimes clubs compete to take it home. Sometimes people bid to send it home with someone else. Sometimes, first-timers bid, not knowing what they are getting into. And sometimes people pool funds in a bidding frenzy until the opposing side capitulates and agrees to take the thing home for a year.

That’s what happened in October, 2010. The Farker was back in Seaside, where the whole mess started. And some of us were hoping it would die a quiet death there. But no. 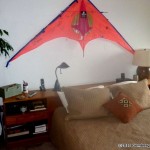 So I’ve got the Star Farker now. Susie is off with her mother on their annual trip together and I mounted the kite earlier today. I can’t wait to hear what she says when she gets home.

While preparing the display and sorting memorabilia, I finally got time to really look things over. The Farker is a treasure trove of kite history and sport kite evolution, as well as an homage to victors and victims in the 18 years it has been annually won.

Innovations and improvements have been…. remarkable…

For night flying, a half-million-candle power spotlight was tied to the cross spreader. To keep the sail taught, bungee tensioners were replaced with the waistband of someone’s BVD’s. And for safekeeping, a velour python carrying case was added.

Aviation Engineer Bill Bigge purchased the kite and nearly ruined the whole thing by making it flyable. As a memento, he attached his lifetime membership card from the Model Aeronautics Association. Another owner thought the Farker was better suited to Pairs flying and added a second, even more inferior kite to the package. And the WACOKS of Carolina, in a likely effort to placate their spouses, added a notarized statement of explanation along with a large green Okra Drogue.

Deep in the bowels of the python carrying case, I found an assortment of wires, ribbons, luggage tags, trading cards, sticks and tape bits.

Not wanting to lose anything essential, important, or historical, I bundled them all into a TSA-approved re-sealable plastic bag and stuffed them back in the snake.

What will the Gomberg’s add to the Star Farker Legacy? We haven’t yet decided.

I’m thinking a laminated photo of Scott Skinner for starters. Or maybe a tail. A really BIG tail. Or perhaps some flying instructions since we got our start 20 years ago writing books on how to fly sport kites.