At least that’s my opinion… I don’t mean in terms of measurable growth, but in the little changes I’ve seen in the mentality at the 18 kite festivals I attended and how folks seem to be opening their minds a bit toward public outreach, especially as we approached the end of the season.

In speaking with stores and kite manufacturers, it would seem that there are just as many sport kite fliers now as there ever were, they’re just not as “tapped into the community”… So as I see it, this coming year is all about looking for ways to encourage group and interactive activities in this arena.

From an industry standpoint, I’ve been actively encouraging stores and manufacturers both to increase their use of multimedia (especially video) in web sites, and I’m happy to say that response has been very good as of late… I think there is still somewhat of a gap between the general public stepping onto a product page, and actually being able to SEE it in action… Based on my experience with promoting through YouTube, if this is done as an industry-wide effort, it will help things along even further and help complete the big picture we present to potential new fliers.

At the moment, there are a couple of passionate and encompassing discussions underway on the AKA (Kite Talk) forum which I’d encourage you to read and even more so, add your two cents on…

Tied into these, you’ll find more related discussions at the following links…

Bear in mind, my goal was not to duplicate the discussions… But they are relevant to all kiters as I see it, and there are members of both the Kitelife and Revolution forums who either don’t post, or aren’t signed up on the AKA forum.

If you want to add your thoughts (pro or con) and it’s possible, please do so on the AKA forum directly… If not, then use either Kitelife or Rev per your own interests.

In 2002-2003, I was fiddling around with a little site that some of you may remember called “Satori Kites” when the founder of Kitelife, Mike Gillard approached me about taking over Kitelife operations… In the almost 9 years since then, it’s been an incredible learning curve in terms of web design, navigation, ease of use and security.

I’ll go on to say that the main Kitelife site (which you are viewing now – magazine issues and such) at the time of this writing is composed of over 12,000 static HTML pages which use a small amount of PHP to call in a small number of snippets that recur throughout the site.

While it’s a long way from where I started in 2003, the navigation, organization, internal search ability, search engine optimization (SEO) and so forth are a bit out of date considering that better than half the site was created several years ago.

What I’m leading up to is that it’s high time for a total overhaul and conversion into something like the WordPress system which is more search engine friendly, allows editing through a web browser, online author collaboration, and most importantly, is database-driven so that things can be moved, amended, organized, tagged and multi-categorized for easier and more subject-sensitive browsing… It will also greatly ease the process of actually adding photos and videos to the content in such a way that it works well for our visitors.

I’m looking at kicking off this project soon by gradually copying content over to the new system at an undisclosed location on the web so it can be adjusted, tweaked and finalized behind the scenes before actually releasing it to the general public.

Main point: I’m calling for YOUR input, your suggestions… The slogan “by kitefliers, for kitefliers” may sound cliche, but it’s the truth, no matter how far I manage to stray from that ideal sometimes with everything going on in my head, it is my true goal – so please, send me your suggestions, critique and anything which might be relevant to creating a better site.

You can call me directly (503-890-0280) during typical PST business hours, or email me ( click here ) at any time night or day… I want to hear it all, positive or negative, we’ll do our best to weigh it in fairly toward the new site development. 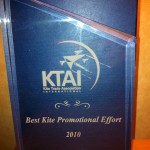 Near and dear to my heart – Team iQuad was was awarded “Best Retail Promotional Effort” back in 2008 and “Best Wholesale Promotional Effort” in 2009, but the two categories were combined this year into a single and more encompassing “Best Kite Promotional Effort” award for 2010 and much to my surprise, it was given to none other than Kitelife.com, making it three years in a row that the KTAI has recognized kiting promotional efforts which I’ve been a part of… We’d like to thank the academy, but frankly, we’re too busy flying.

At the risk of sounding cliche, this KTAI recognition really belongs to a whole lot of folks who have been out there shaking it up, promoting and generally keeping a positive outlook in their day to day kiting world… Promotion is a group effort, served in many different flavors by kite teams, stores, manufacturers, clubs and bold individuals around the world.

Of course, my deepest appreciation goes out to my better half Takako (you probably know her as TK)… Not only for doing the majority of the production on the magazine these days, but for her ideas and inspiration, as well as her ongoing support and patience with my frequent single-mindedness… Dieski yo, thanks for putting up with me, I know it ain’t always easy.

Thank you. Purely, simply, thank YOU.

There is a lot that goes on behind the scenes to keep Kitelife up, running and improving… It can be a bit overwhelming at times, but we really love what we do and I personally can’t imagine dedicating so much time to any other pastime.

Special thanks to our advertisers and Kitelife Subscribers, without their support it would literally be impossible for us to continue our efforts here, and in kiting as a global community.