I’ve been lucky in the last several years to participate in a number of collaborations between artists and kite makers. Of note were the Drachen Foundation exhibitions in Puebla, Oaxaca, and Pachuca, Mexico, but before that I collaborated with artist Susan Robb on kites that were exhibited at the Hui Art Center in Maui, Hawaii. In all of these examples, many kites were made by the artist-participants, but others had to be “made into kites” by me. 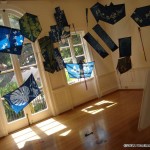 This meant taking an artist’s image on paper and transforming it into a flyable kite.

This is not really difficult, but in every case there were real limitations that influenced the end products: type of paper used, size and length of available bamboo, amount of bamboo or other framing material, and time. I’m very proud of these results, but I was recently challenged by another exhibit, this time only limited by the size of the artists’ work. 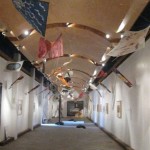 This exhibit, assembled for the 1st International Mokuhanga Conference in Kyoto, Japan was organized by Drachen Foundation administrator, Ali Fujino, who solicited entries from international kite enthusiasts, American print makers, and Kyoto kite maker Nobuhiko Yoshizumi. I was tasked with making a series of kites for the exhibit and also to frame the majority of submitted prints. For me, the challenge, then, was to make a cohesive group of kites that might be interesting to this group of print artists, but also to the art-viewing public both in Japan and the US. I also feel very strongly about being sensitive to the original artists’ work – making these prints into kites is a fundamental transformation – manipulating it in a positive way for its new life as a kite. 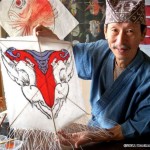 My first step in the process was to decide “what my kites would be”, and for that I returned to the inspiration of Defining the Wind, Scott Huler’s wonderful portrait of Francis Beaufort and his famous scale of wind force. Using the twelve Beaufort numbers, I decided to make a kite for each wind force – not exactly corresponding to or appropriate for the wind of each, but at least representative of each. So now the challenge would be to make twelve kites that would, in some way be recognizably related to each other. Because I knew that Yoshizumi-san would contribute wonderful Japanese kites to the exhibit, I traveled back 100 years and looked at the American Barn Door (or, Three-stick Kite) and found this to be my ideal starting point. I’ve found it interesting that the barn door can be made with many proportions, but it’s also appropriate that it’s an irregular 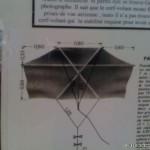 hexagon, instantly relatable by Japanese audiences to their own famous rokkaku. Looking at historical images of barn door kites, I found them to be extremely varied and I found interesting three-stick images, as well.

Included in this group of images was a French kite article from the early 20th Century showing a three-stick kite used for aerial photography – a kite that looks remarkably like a modern genki. Amazing!

So, as I started to make the individual kites for exhibit, I had the choice of making them into simple traditional Japanese shape (kaku-dako, buka-dako) or any number of three-stick or barn door variants. 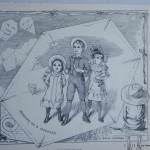 Participating artists were limited by their own particular workspaces and experiences, so, in general, the starting prints were small by kite standards.

This limitation would prove to be a positive influence: for the mokuhanga conference, it provided the link to the Japanese kite maker of 100 to 200 years-ago, who, likely would have used mokuhanga to print his smaller, “mass-produced,” children’s kites. Likewise, the mass-produced kites in the US would have been printed with popular images appropriate for their audience (not mokuhanga, but done for the same reason –large numbers). 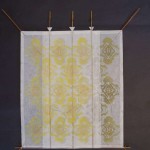 Opening in Kyoto, in June, the exhibit will travel to venues frequented mainly by print artists. (See below for additional exhibit information) In addition to the exhibit, I have the opportunity to speak to these accomplished artists and give them a glimpse of Japanese (and American) kite history. Even I was surprised to find a number of Japanese kites in my collection that started with a sumi-e (black ink picture) that was then hand colored to its final form. Check in with me after June and I’ll provide the Kitelife audience with the powerpoint presentation given at the conference.

Info on the exhibit locations:

The International Mokuhanga Conference 2011 in Japan will gather professional print artists, art educators and scholars in the field of woodblock printmaking to exchange current research information and experiences with Japanese traditional craftsmen, printmakers and print related art suppliers and toolmakers.

We are confident that this event will greatly inspire the participants and thus serve as a venue for generating excellent results in preserving and renovating mokuhanga traditions.

The kites will be judge by Beth Cullom of Beth Cullom Gallery, Scott Skinner, kite artist, and Richard Steiner, artist and director of the Kyoto International Kite Association. First, Second and Third places will be awarded gift certificates for Hiromi Paper International and McClains Printmaking.

We will announce the winners from Kyoto during the conference.

After the conference, the kites will be brought back to exhibit in Seattle at the Beth Cullom Gallery and the Mighty Tieton Art Gallery, in Tieton, Washington.

We are also looking at possible exhibitions of a selection of the kites in Portland, Oregon and Puebla/Oaxaca, Mexico.