Rant of the week: All the advice I offer in my Travel Tips can be ignored if you are flying on Continental. 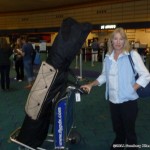 I’ve flown close to two million miles on Star Alliance carriers and have never had a long bag refused or charged. But the woman at Continental last week informed me that all the other agents I had met had not correctly applied the rules. She wanted $100 coming and going to Dieppe. Golf cases are fine it seems; anything else is “oversize”. Their web page even says you can’t put any non-golf items into a golf case.

I handed the bag back to Susan and told her to take it home. It contained my night fly kites and I had plenty of other stuff to fly.

As it turned out, Continental lost the bags of two other kiters on my flights to Canada. Coming home today, they couldn’t find any of my connecting flights. And it is taking them longer to get me from New Brunswick to Portland than is needed to fly from Portland to Japan…. 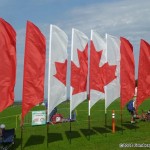 I’ve long admired the International festival held in Dieppe Canada. It is well organized, hospitality is warm and welcoming, and the people there seem genuinely appreciative of the kites and kiters.

With eleven countries on the field, this is the closest thing to a European style international festival you will find in North America.

And of course, it is no coincidence that Dieppe Canada is sisters with Dieppe France where a really huge event is held every two years.

I also relish the chance to spend some relaxed quality time with good kite friends from around the world. So all things considered, I was pleased to be back in Dieppe.

On the other hand, any honest report has to say something about the mud.

Here’s the recipe: Fertilize a grassy field well. Rain on it for a week. Then turn thousands of spectators and a dozen vehicles loose on the lawn to stir it up. Finally, bring out the sun to bake it all. And don’t forget to mix in a hungry swarm of mosquitos…

But kiters are a tough bunch. We brought bug spray. We bought rubber boots. We wore hats and in some cases, insect-proof mesh suits. And when the fickle breezes blew, we put a show in the sky!

The theme this year was the “The Beatles”. Kite artists prepared designs featuring the fab four and serious cash prizes were offered. In a couple of notable cases, the results were remarkable!

The indoor fly also focused on a Beatles theme. Lisa Willoughby, Amy Doran, and Glenn Davison put together a professional program in just two days with help from Connor Doran and Joe Meaux. About 2000 guests attended the show.

The next evening, a night fly kept everyone on the field late for an enjoyable music program that looked like fireworks on strings.

The show kite field was separated a bit from the main arena and at times, it was lonely out there with half a dozen of us flying while the rest of the group were over in the tents interacting with the public, signing autographs, and sharing bug spray. I put up a dozen mid-sized pieces including Frogs, Bugs, Chameleons, and Fish. 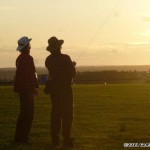 Dieppe ran Wednesday through Sunday. So it was longer than most events. On the final afternoon, the breeze finally came across the field and everyone emptied their bags. It seemed a shame to pack when the wind was fresh and smooth. But many of us had early and long flights or tedious drives home. We said our farewells in the hotel lobby and set alarms.

The nice thing about the international kite family is that there is always a next time to see people. South Africa, France, and Australia are a long way off. But kiting has made the world a smaller and more familiar place. I’m home for a day and then off to Long Beach. Some of my Dieppe friends will be there too! Told you it wouldn’t be long!