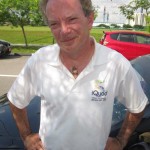 iQuad has held their trademark clinics all over the United States, in Canada and even in the United Kingdom over the past 5 years, teaching people new skills and approaches with their Revolution Kites. Introducing people to team flying, working on specific skill sets and helping them to shortcut the learning process of getting to be a better Rev flyer.

And as an added bonus, the clinics also end up expanding the circle of friends that share the passion for flying these kites.

But, how would this translate if we took the clinic approach across the Pacific Ocean, specifically to Singapore?

The idea initially came up as iQuad was making the preparations to head over to the Bintulu International Kite Festival in September. “What if we went a little earlier and ran a clinic in Singapore the weekend before?” After a few days of discussion on the hows, whens, wheres, and a lot of logistical fieldwork with our local sponsor Patrick Tan, the date was set and the announcements went out!

We’d land in Singapore for the start of the trip and then continue on to the BIKF afterwards. This gave us a few days to acclimatize to the much hotter weather and get settled in and meet a new bunch of flyers. After an exhausting flight over to Kuala Lumpur and then a short hop down to Singapore, we arrived the Thursday evening, settling into our hotel in a rather colorful end of town.

In fact, it ended up being a good choice for a location, given it’s central location and great access to food and supplies. A chance to rest up before the clinic began and catch up on some much needed sleep.

Despite all the travel I have managed to do over the last few years, I still have issues sleeping on a flight so after what was roughly a 36 hour day, a pillow and a bed were a sublime welcome relief. Zzzzzzzzzzzz

We chose the Punggol Field Walk area to hold the clinic, due to it’s mostly central location, good quality grass fields and easy access to transit for people.

While here in North America, many people have easy access to cars, Singapore’s fantastically expensive car “ownership tax” means many people rely upon either cabs or the Monorails to get around.

The morning looked to be heading towards a nice sunny day, and off we headed to the field. It was a great location to fly at, despite it being a little less windy than we would have preferred, but the first day’s agenda was entirely focused on Dual Line flying and thus, the rest of us could sit around while John worked his magic on his new Kymera kite.

For those who hadn’t wanted to participate in the dual line aspects of the clinic, the rest of iQuad spent the day adjusting line sets, handles and providing some guidance on low wind Rev flying.

Did I mention how hot it was? iQuad had just gotten back from The Antelope Island Stampede, where temperatures were VERY hot but, also very dry.

We figured, heck, we’re ready for this!

However, in Southeast Asia, very hot means 95 degrees, and 100% humidity during the day. It feels much like you are walking around in a steam bath the entire time. But, in the evening it tends to cool down, to maybe 85 degrees, and the 100% humidity.

Thankfully, I’d learned the lessons of this heat when I went to Bintulu last year so we all managed to survive through proper hydration (both water and 100Plus type drinks that top up your electrolyte balance) and quick dry shirts but, even still, the water sprayer Takako picked up when she and John had flown in Singapore in the summer saw an awful lot of use!

Despite being dogged by low winds (and constantly changing directions!) much of the day, the Friday was deemed to be a relative success by the 20 attendees, with the dual line flyers picking up a bunch of new skills via Mr. Barresi, and the quad flyers having a generally relaxing day.

After a great chinese meal a little ways away from the field, we all headed up to a local spa where one puts their feet into a pool of water and Doctor fish then suck all the dead skin off of your tootsies.

I have to admit, I simply couldn’t take the sensation for even a few seconds. In my mind, it felt like worms attacking my feet but, the rest of the people found it to be great fun. Me, I just stood by and watched and laughed at the silliness!

Saturday morning started off with the same great weather, looking like we’d get another fantastically sunny day in Singapore. After a quick morning stop for some coffee (Mmmmm, the coffee over there is simply delicious, a much stronger taste but, also quite a bit sweeter) and a light breakfast, off we went to the field.

Again, the day was pretty much low wind all day long but that certainly didn’t seem to deter the attendees at all. It’s always much easier to simply take the day off when the wind is light and variable however, it’s truly the best time to learn as well. The skills you gain when coping with low wind will serve you very well when the wind picks back up again.

When we had broke for lunch, a group of us wandered over to a local mall for some food (this time, a Canada 2 4 1 pizza place, which sadly did not give any of us Canadians a discount for our Canadian passports) and a drink refilling.

As we sat there relaxing, we noticed a rather ominous bunch of clouds heading over the city. VERY ominous clouds and a lot of them.

So, we quickly finished up and headed back to the field but, before we even got back, the skies opened up and the wind began to howl.

Living in the Pacific Northwest, one would think I’ve seen all manner of rain storms however, this was easily the heaviest rain I have ever seen, and coupled with a 30 – 25 mile an hour wind as well. I was drenched from head to toe simple trying to get back across the field to aid in holding the popup structures down onto the ground, while the rain blew sideways across the field.

Complete with some thunder and lightning, it was an awe inspiring site to take in, however, it wasn’t very conducive to running a kite clinic.

Thankfully, it passed by us as quickly as it had arrived, so as people began to dry out kites and clothes, the clinic was back on. To a degree. 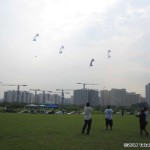 Unfortunately when a storm like that whips through the region, the air tends to become dead still afterwards so, it was back to some low wind flying and an introduction to team flying.

Much of the team flying information was shown by walking through the moves on the ground however, if nothing else, it proved to be entertaining for the attendees to watch!

The day ended with a deep hope that we’d somehow manage to get some more wind for the final day of the clinic. 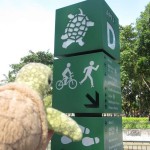 Upon arriving to the field on Sunday morning, we were pretty convinced it’d be much of the same wind wise, so we held a vote as to whether we should shift venues down to the D1 field at East Coast Park, with the idea that there MUST be some better wind down on the water. “All in favor, say AYE” and AYE it was!

And sure enough, there was definitely better wind down by the Singapore Strait.

Across the water rests Indonesia and the beach itself is a wonderful sand that isn’t too fine but, nor is it too rocky. And much to our delight, the grassy areas of the park had a large amount of tents left over from some manner event the previous weekend so, there was ample shade for resting.

And we were off and running again! While the beach isn’t a particularly deep one, there was room to set out 120 foot lines and most of the day was spent looking at the basics of team flying.

We’d build up small groups of four for the rest of the afternoon, taking every single attendee through what was frequently their very first time flying as a group.

By the end of the day, all I could see was smiles from a group of people who’s skill with a Rev had grown by leaps and bounds over the weekend.

While the wind certainly didn’t cooperate for the first two days, overall I’d have to judge the clinic as being a complete success.

It was great to be able to spend some quality time with the Singapore Rev flyers, building new friendships and learning new skills. 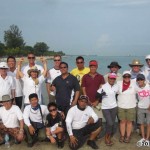 It ended up being a great way to start our team’s swing through Southeast Asia.

The plans are for a return to the area next year as well, perhaps this time we will head up to Malacca to hold the clinic, or, some other location right on a beach.

Time will tell but, from all of us on the team, a hearty thank you to the clinic sponsor Patrick Tan (Layangman.com) and all who attended the clinic – here’s hoping we will see all of you again next year!