While the news of an indoor competition or festival being cancelled is always hard to hear, it often inspires a new burst of energy that opens new opportunities. Perhaps it was just the timing. Either way, when the New Ocean Shores Indoor Kite Festival and NWSKL Competition were announced just two weeks before it was scheduled, it inspired many to make the journey to Ocean Shores, Washington.

Making the 6 hour drive from Bend Oregon on a Friday night in pouring down rain, made me wonder if it was such a great idea to be taking on the journey. But to be honest, indoor kite flying has really been an amazing experience for both Connor and I, and we want to support any events we possibly can. So we continued driving into the wee hours of Saturday morning, and with a friendly call from our host and announcer Bob Wendt we got settled in for the night in Ocean Shores.

The next morning we arrived at the Ocean Shores Elementary School fairly bright. One thing about indoor kite flying is the location. Whenever you walk into a new venue, there are factors that play into how the event will all roll. How big is the area? How high are the ceilings? How much draft, or are there blowers on?

Sounds a bit silly to someone that has not flown indoors before, but it truly is an influence on how difficult or easy it can be. Ocean Shores Indoor Kite Festival is one of the venues that indoor Kite fliers dreams about… A beautiful full sized gym with great lighting, comfortable seating, and even acoustics were taken care of with classic Diamond kite shaped acoustic tiles around the upper walls.

To make it even better we walked in to find Toby Arndt, Scotty Davis, Pam Brown, Dick Curran, and Dave Bradley already setting up kites and getting the morning started. At that point any question about the drive up being worth while was washed away by the great welcome and the great venue we had to fly in.

Kite making was being set up in the hallway for kids young and old. I spent a few minutes and learned a new pattern to use with the children I work with in my programs. The cafeteria was right across the hall from the gym, and many of the tables were filling up with bag raffle items. Kites were being set up to be sold, and it looked like a mini kite store in there. I had to resist the urge to even walk in and look for fear I would be hooked on something and go home with more kites then I came with. (A common occurrence for many kite enthusiasts).

Others arrived throughout the morning and fairly soon the kites were lining the walls of the gym with not much space to spare. Gliders, and duel lines, Pterodactyl Gliders and Revolutions Indoor Quad lines, classic Decca and new unseen designs were being played with. I say play because that’s truly what we all do. Play. It is the beauty of Kiting. It has NO age limits whatsoever, and everyone is willing to share. That meant I got a chance to try out several kites I have not flown before, such as Dave Bradley’s Decca built by Guild works, and a new designed Pterodactyl Glider by Karl Longbottom. Always inspirational and there is never a limit to what you can learn, so I take those opportunities when I can.

The North West Sport Kite Competition was soon to get started so the pilots meeting commenced and we all scattered to get ready. There were five competitors and a three judge panel for the first of two competitions. As we were getting ready to start, I realized that the stands had actually gotten busy. Many new faces were arriving and getting comfortable. What a great thing to see people come and enjoy, and some others that were interested in giving it a go were there as well. Great kudos to Scott Davis and Toby Arndt as well as the event sponsor Ocean Shores Kites. The rabbit for the competition was Connor Doran. The *rabbit* demo gives the audience and the judges a guideline of things to come, and where the boundaries are. Connor did a repeat performance of his competition that took him to the top 12 on America’s Got Talent, and put a few tears in spectator’s eyes.

The first competition was soon underway with Judges joining the good sized crowd to enjoy the antics and entertainment of Dick Kern, Tobias Arndt, Scott Davis, Dave Bradley, and Myself. 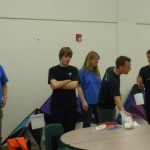 Results of the NWSKL Competition ROUND 1 were:

After the competition there was time to relax and visit with newcomers, and get a few demonstrations in. Meanwhile the bag raffle was growing and so was the kite sale area. At that point I had to take a longer walk down the row of kites being sold. I had to pause over the stack of Pizzazz that was being sold. I have always had a soft spot for these kites though I have never owned one. Just seeing them brought back a day at WSKIF when the designer of the Pizzazz Dick Brown had his own personal stack out. I stood there watching with saucepan eyes and he walked up and handed me the handles. It was a moment that I will always remember and appreciate. I digress, but it was great to see those kites sitting there.

A Pot Luck dinner was soon drawing the attention of a crowd of about 40 people. It was great to be able to land your kite and walk right into dinner with friends and family across the hall. We got the great news of a new grandbaby coming to Wayne and Sonya Turner which raised a glass or 40. A thank you to Ocean Shores Kites owners Andy and Brenda for sponsoring the first Ocean Shores Indoor Kite Festival brought great enthusiasm for a repeat next year.

The bag raffle was pretty loaded and we ended up with a new Wala Glider. It will be a great kite to use in my programs at school as we are working hard to get new people interested in indoor flying.

A bit more flying to work off a great dinner and it was time to close up for the evening, a dash to the car in the pouring rain; we headed back to get some rest before another day of competition and fun.

After a great breakfast at a local bakery, we headed back to the Ocean Shores Elementary to hit the gym. A brief delay by a herd of deer, and a local policeman who nicely informed me it was 25 mph and not 40 mph still got us to the school in plenty of time. Those wondering *how nice* the policeman was, I assure you he was nice enough to give me a gentle warning, and send me on my much relieved way. One note to remember about Ocean Shores, just assume it is 25 mph most everywhere. It’s better that way, and safer considering there are hundreds of deer in the area.

NWSKL Competition 2 was a bit earlier in the day. Warm ups and tuning of kites was well under way and it was not long before we were getting the order of go and turning in music. A note to you newcomers: Competitors are required to perform a routine lasting between 2-4 minutes long. No shorter, no longer or it is an automatic disqualification.

Music is key to the flier’s performance and can make or break a routine. It sets the tone and feel for the performance. Music needs to be turned in on a CD to be cued up by the announcer, in this case Bob Wendt (who as always does a brilliant job of announcing). It is always a good idea to turn in 2 identical copies of your CD in case one skips or doesn’t play. Rules state that the second CD can be used.

Judges for the event were: Paul DeBakker, Connor Doran and Nic O’Neill.

Results from ROUND 2 were:

While we waited for results we had time for demos. A bit of fun ensued when Toby and I had joked about trading our competition music at breakfast, and Connor Doran pushed us to go ahead and try it. So I asked Bob to cue up Toby’s competition music and gave it a gallant try. I think it was actually harder then a mystery ballet because I have watched Toby perform it many times, including when he won the Grand Nationals in Seaside. As I waited for the first note, however, I could not remember how the music started to save my life. I drew a complete blank. It’s a good thing we did not have to compete to it! It made it all worth it to get to watch Toby have a go at my competition music. All That Jazz by Liza Minnelli had Toby shaking things and shimmying around the gym. I must say he did a great job, and had a good time with it. So much so that Paul DeBakker decided to jump on the bandwagon and give it a try as well. It was a great time, and also a good learning experience to see what others would do with the same music. I actually think it would be a good idea to try this at future indoor competitions. Just for fun.

Results were announced, and much to my surprise I was given a new Walla Glider that was donated by Don Ostey to the winner. I am thrilled and happy to have two new kites to be teaching with!

We finished up with demos and it was time to get ready for the long drive home. Kites needed to be packed back into bags that were now two Wala kites fuller. I was having some trouble getting things to fit back into bags as there seemed to be three extra kites in bags that were not fitting. This often happens to us when we are traveling, so I didn’t think too much about it. But still things were not going back together the way they were supposed to. As I stood there looking at the bags, Dale Ray and Scott Davis started grinning. It was then I realized I was holding the set of Pizzazz kites that I had regressed over the night before. Dale wished me a Happy Birthday, and Scott gave me the short rundown of the kites he had competed with for years. I was truly moved… And I hope that Dick Brown reads this and knows how much he influenced me that day.

I am truly thankful to all that worked so hard to put this event together. I know how much work it is, and how much time goes into an event. This one is a keeper and I look forward to attending next year. I see this festival as one that will continue to grow and become one of the premier indoor events on the West Coast. Next year there will be no doubt of whether the 6 hour drive is worth it.

I can guarantee it is.