Indoor kite flying offers a big window for expansion in the science and art of kite flying. Its unique features such as close contact with the audience, theatrical dramatization, team work and being weather proof, offer endless possibilities to crowd pleasing shows and gratification to kiters and show designers.

With that in mind I produced “Figuras en el Aire”, (Figures in the Air) in San Nicolás, Argentina in March, 2013. Photos and a video below illustrate the production.

It took a good three months to organize the event, all via Internet – I was in the USA and the crew-to-be was in Argentina. The guiding points were: 8-10 kids in the early teens without kite knowledge; group show; emphasis on show-design and choreography.

The goals were: good crowd reaction and the awakening of interest and joy among the kite-world-newcomers, whether flyers, designers, choreographers or plain helpers. I ended up with many of them, with wonderful, fun loving folks. We got to our goals, about 70 %.

An additional aspect of the production was experimental, this being an exploration of the concept of kite-flying-show: The pilot/technique-centered show v. the theatrical, public centered kite flying.

The on-paper organization was implemented in 7 days: March 16- March 23. In the morning of March 13 I helped the kids and some staff to make the glider kites at the “Escuela Aire Libre”. That took about 2 hours followed by ½ hour of basic flying teaching and practice. Snacks, drinks, socializing probably consumed another hour. Nobody left until the school kicked us out.

On March 21 the kids did 3 things: practiced kite flying for 15-20 minutes, got the show design and choreography from the chief choreographer Claudia Mori, an exceptional person, and practiced the show for about 20 minutes. Next was to neatly pack the kites in the individual envelopes (we made folding gliders.) They allowed for my taking the kites with me for repairs and tune ups. The kids did not have any further physical relationship with the kites until the moment of the show, Saturday March 23. 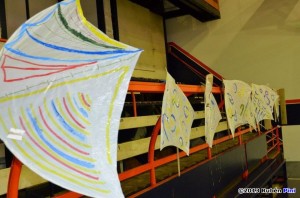 To be expected, the kids’ performance had plenty of mistakes, most of which can be attributed to the lack of time for training and rehearsals: all the children were very busy with school work and extra-curricular activities typical of effervescent teen-agers. Nevertheless the show design, choreography and the children’s performance and the public reaction succeeded in demonstrating the unique possibilities of indoor kite flying.

The children’s show was substantially beefed up by the super performance of team “El Alma del Piloto” headed by Gustavo Di Si of BATOCO, Buenos Aires, and an exhibit of Minikites by the 2008 AKA Minikites Grand Champion, Luis Claris Skoczdopole. I also flew a couple of kites.