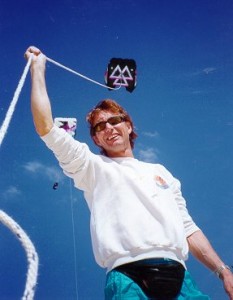 Well, you know you have had a good festival when you look in the mirror Monday morning getting ready for work and you see a red face with a white ‘sunglasses’ shadow around the eyes and extending back to the ears. Wow, three days of flying kites in near perfect conditions, looking at the kites and ground displays of George Peters, walking through Peter Lynn’s Mega Ray … where to start to tell you about this festival? This is my home festival and I am pretty excited to report that this was one of the best festivals held in Australia in recent years.

Adelaide is located in the state of South Australia, in the central southern region of Australia. Adelaide is the capital of South Australia, located on the coastal shores of the Gulf of St. Vincent. The water lies to the west of the city, giving us beautiful sunsets over the water. It allows the prevailing southwesterlies to blow in unhindered straight off the water… a kite flier’s paradise. We experience a mild climate with average temperatures for this time of year in the range 15 – 25 degrees Celsius.

The Adelaide International Flight Fest had its inaugural year last year, but the local kite club has been running an annual festival for around 6 years now. The event has slowly built from a small club festival into a major event on the Adelaide annual festival calendar. Much of the success of this event must be credited to the hard work of the Adelaide Kite Fliers’ Association supported by a local retailer, the Kite Factory.

Invited guests for this festival were George Peters and his partner Melanie Walker from Boulder Colorado, US, Peter Lynn from New Zealand,Michael Alvares, Tony Wolfenden, Rob Brassington and Neil Taylor from Australia. In addition to this not-so-insignificant troupe, we had the pleasure of seeing Elain Genser from Canada who is holidaying in Australia. Add to this some of the most notable kite makers in Australia: Ray and Gail Wilmer, Philip McConnichie, David Bull, John Murray, Ricky and Jo Baker, Karen O’Connor, Peter Lloyd , Godfrey Gamble, Kevin Sanders and many others too numerous to list, and the scene was set for a magic display of kites, ground displays and colours.

The organising committee of the AIFF–led by Anne Marie Parry and Maddie James, supported by the committee members of the local Adelaide kite club (AKFA)–did a superb job of putting together a wonderful range of festival activities and shows for the public and fliers alike. Major sponsors were reportedly delighted with the festival and are more than keen to be involved in next year’s festival.

The location was suburban Semaphore beach. With approximately 100 metres (>300 ft) of beach at low tide, and about 1.5 to 2 kilometres between jetties (piers), we have more than enough room. This year the flying site was immediately adjacent to the Semaphore jetty, with the main field to north (downwind of the prevailing southwesterly winds), giving the public a superb vantage point from which to view the kites on display. The area south of the jetty was used for occasional team displays and lolly drops for the children, and for public kite flying.

Thursday was spent setting up, getting acquainted, and taking in workshops offered to the registrants. Not a lot happened beyond renewing offriendships and general working on the site. A few kites were put up, and the workshop originally planned for the afternoon took place Thursday evening. It was led by Michael Alvares. Participants made lanterns to be suspended from kites during the night fly on Saturday night. These consisted of plain cardboard boxes, with shapes cut out and coloured tissue paper stuck over the cutouts. A candle was then placed inside the box as a light source. Very simple but very effective.

Kite fliers were instructed to be at the site bright and early Friday morning for Schools Day. Invitations had been sent to all metropolitan primary schools (Years 1 – 7), to bring their classes down to Semaphore to experience the joys of kite making and flying. During the week preceding the festival there were organised workshops for the children at their schools, and on arrival at Semaphore all children were given a questionnaire to be completed, which encouraged them to mingle with and speak to the kite fliers. 2,500 students arrived to partake in what turned out to the best day for the whole festival–blue skies and steady southwesterly breezes coming in straight off the water at around 10-15 knots for the whole day–it can only be described as the perfect kite flying day. Every kite flier tried to get every kite in his or her bag into the sky. The steady breezes meant close, tangle-free flying. Thiswas one of the most memorable kite flying days I have ever experienced, and most other kite fliers made similar comments, including George Peters who remarked it was one of the best flying days he has ever had – must have been good!

As a back drop, we had Peter Lynn’s Mega Ray, flanked by two of his giant octopuses. Picture this with George Peters’ Wind Garden and sky gallery and all the other kites in the skies; it was just ‘magic’! After flying for some time, the Mega Ray was brought to ground and the children were allowed to walk into it. Although the school kids had mostly left by 2:30 p.m., kites continued to fly until dusk, an indication of how much the kite fliers were enjoying themselves and the conditions.

Saturday was the first public day of the festival. The weather was much cooler, the winds were unsteady and even unpredictable at times, kites broke loose and had to be chased, including the biggest break of all when a large flowform owned by David Chandler of Tasmania broke loose, trailing approximately 50 banner flags on the lines; it was stopped at literally the last opportunity before trailing out to sea. A member of the public, standing in ankle deep water had grabbed the trailing fly line, and was slowly being dragged out to sea by the time one of club members had arrived in a 4-wheel drive vehicle and parked it on the last of the trailing fly line. The Mega Ray was grounded most of the day, with Peter unwilling to test the truck, bobcat and two 4 wheel drive vehicles being used as ground anchors. George Peters’ kites seem to fly in any conditions– a lot were up most of the day–and his Wind Garden adds colour to any gloomy day. Unfortunately, conditions keptspectators away for most of the day, and by nightfall, there were only the kite fliers themselves to enjoy the wonderful night fly and fireworks display. The night fly was enhanced by the ‘team’ from Perth, Western Australia. Neil Taylor, Karen O’Connor and David Bull had lit up their single line kites, then proceeded with team flying with LEDs attached to their team kites. The lanterns made at the Michael Alvares workshop were attached to a fly line and many other kites were hoisted aloft with lights and reflective tape or Mylar tails … once again a magical time. Bob Dawson from Leading Edge Kites, Coffs Harbor, New South Wales, who, in his other life is a pyro-technician, supplied and staged the fire works display. It was a major spectacle in its own right, lasting around fifteen minutes and providing a fitting end to a long hard day.

Sunday, the weather conditions had improved and, while not as good as Friday, it allowed kite fliers to get most of their kites into the sky at some stage through the day. An article in the local press, along with the improved weather, encouraged spectators to come and see the show. One of the sponsors of the event, a local radio station which had its own promotional activities on at the festival estimated a crowd of 50,000 people for the day. We hope none of them went home disappointed. Once again the kite fliers put on a show, from the magnificent display kites to team displays to lolly drops to Mega Ray inspections to rokkaku battles featuring a popular TV bear character, Humphrey B. Bear.

Sunday saw the close of the festival with the festival dinner, presentations and auction being held that evening in the marquee on the flying site. Most kite fliers agreed that it had been a wonderful festival and many thanks were passed onto the event organisers and sponsors. A highlight of the auction was Peter Lynn’s dirty socks and jocks, which had been thrown out of the shared room the night before because of their stench. Phil McConnichie, feeling some odd sense of misguidedloyalty toward his former boss, bought the items for a not-so-insignificant sum of money, and paraded around with them wrapped around his ears. I have always had my suspicions about New Zealanders and this incident only served to confirm them.

It was also unanimously agreed that the Adelaide International Flight Fest has ‘come of age’ and is at a truly international standing for kite festivals and may be pushing the annual Festival of the Winds in Sydney as Australia’s premier kiting festival.