This first-time event, held in northeastern Ohio on the campus of Bowling Green State University, was organized by Wings On the Wind Kite Shop, and coordinated by Rick and Robyne Gardner. The event featured full sportkite competitions, as well as comprehensive judging for kitemakers. 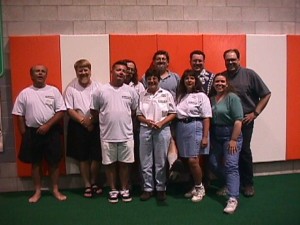 After last week’s showdown at Kalamazoo, Michigan, there remained only one final event to determine the US qualifiers for kiting’s World Cup, to be held this September at Dieppe, France. Kalamazoo narrowed the race to three teams – Chicago Fire, Shanti Air, and the Windjammers. The Ohio Cup would be this event. We wonder if this circumstance has ever happened before….a first-time event hosting a kite happening of this importance?

Saturday morning saw Shanti Air and the Chicago Fire setting up their battle encampments. Everyone waited for the Windjammers to arrive, to complete the 3-way battle for >the two World Cup positions. We found out that the Windjammers were contracted to do a demonstration at a balloon festival, and decided to honor that commitment, thus giving up their chance to qualify for a World Cup invite. Thus, the battle was settled without a shot being fired.Or was it? The Chicago Fire and Shanti Air were now the USA designates for this year’s World Cup, but there remained a large score to settle, in the minds of Shanti Air. Shanti had not beaten the Chicago Fire in head-to-head competition, and they loudly proclaimed that this was the weekend that it was going to happen. Friday evening, Shanti huddled in a conference room, viewing video and discussing their routines. They rewrote the ballet routine, dropping a troublesome sequence that they felt had cost them valuable points at last week’s event. They came to the field on Saturday loud, proud, and confident. The Chicago Fire entered as a four-person squad, due to work commitments for Bob Neiman. They exuded calm confidence, this is a team that has squarely faced many a challenge.

As we did for the previous event at Kalamazoo, we issued our handicapping odds.

Shanti Air 2.5:1 – Strong routine, but will they execute well enough to win?

Chicago Fire 2:1 – As above. Usually fly good compulsories, which should be enough to win if their freestyle performance goes well.

Shanti Air 4:1 – With 6 kites, there is a lot to go wrong. Watch for an exciting routine, but uneven execution.

Round One, Team Precision

Shanti Air took the field first, flying their Opus 8’s from Shanti Kite Company. They flew the three compulsories with several noticeable errors, but none that were critical. They followed with a very solid freestyle, using all of the dynamics that a six-person squad allows. Several of the more complexsections of their routine drew long and loud applause from the audience. The team was very pleased after the performance, they knew that they had set a standard for the Fire to attempt to beat.

The Chicago Fire followed, and clearlyflew better compulsory figures. As we predicted, their freestyle was clean and classic, lacking in highlights but executed well. This one was too close to call. After a short wait, we found that Shanti had gotten their wish, a first-time victory over the Chicago Fire, 66.03 to 63.43.

Could they repeat the feat in ballet?

Again, Shanti Air flew first. Their opening sequence, a progressive launch into a horizontal thread maneuver, was flawless. They progressed through their performance, to the theme from “Jurassic Park”, in dramatic fashion, with only a brief lapse in execution mid-routine. They finished to loud applause, and hugged, high-fived, and hollered for a long excited second. Team captain Al Hargus then looked toward the Chicago Fire as they made their way toward the arena, and made the gesture of drawing a line on the field, wordlessly saying “Top That!” 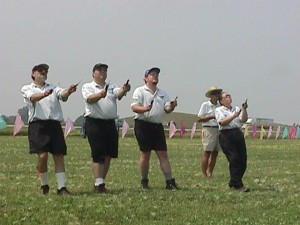 The Chicago Fire followed, and knowledgeable fans wondered what routine they would fly in this four-person configuration. Upon the opening strains of the tune, we smiled, remembering it as their championship-winning 1995 ballet, the “Hallelujah Chorus”. This routine was virtually unbeatable for two seasons, until their unfortunate episode at the All-American in 1995, when team leader Eric Wolff’s kite virtually exploded after a mid-air collision with a teammate. They flew this graceful routine to good effect, but would it be enough? The state of the art has progressed since 1995….. They flew well, but would execution make up for the comparable difference in excitement and complexity? The routine was well-flown, but obviously not up to the standard of Shanti Air. Shanti wins, 70.07 to 66.07. Shanti Air sweeps, and Team USA has been picked for World Cup VIII!

Masters class saw Dan Brinnehl taking his first individual First place in class by winning Precision. Russ Faulk flew anoutstanding ballet to win the class. Quote of the day goes to Second-place MIB flier, Mike Delfar- “This is a big win for me! I SUCK at ballet!” We disagree, Mike.

Quad competition was taken by Ken Blain, with “Co-Pilots” taking the pairs title.

Saturday evening saw an excellent indoor competition, hosted in the BGSU field house. This facility is HUGE, providing for more than enough space for the twenty fliers to practice at the same time. The competition saw Wayne Brunjes taking first, Brian Siegel second, and Ken Blain and Dan Wozniak finishing in a tie for third.

The “Ohio Cup” is an individual award, given to the one with the highest cumulative score from all events entered. The winner of this award was Ken Blain.