My wife and I arrived at Heathrow airport on Friday, October 9 with just three days available to rent a van, travel across England to pick up and assemble my 16′ kite powered speedsailboat, meet and organize the four man international crew (with their wives), practice launch procedures and be ready to sail flat out Tuesday morning in the 16th Annual Johnnie Walker International Speedsailing Event at Portland Harbor, Dorset, on the south coast of England.

No sweat. Except that the boat didn’t clear customs on time. This meant 300+ extra miles of driving (no freeways) to pick it up on Saturday. Nobody in England works on Saturday. We had to unload and assemble the boat on Sunday. Of course, the crew with their strong backs and tools arrived Sunday evening; the boat had to come off the van and be put together Sunday day. Monday practice sailing was a bust, there was no wind at all. The crew understood their jobs well enough as each had done it many times, but only two had ever worked together. No sweat. This is just business as usual, in international speedsailing competition.

Speedsailing, no holds barred, timed racing over a 500 meter measured course, has been my avocation, some say vice, for twenty years. Wind direction, wind speed, boat configuration, even boat type, all are optional. The entrants must only be powered by the wind, be man-carrying (no models), and be capable of accelerating from rest.

Way back in January, 1978, I met a British kite manufacturer, Keith Stewart, at a trade show. I’d been thinking about inclined sail rigs on conventional catamarans (inclining the rig to windward can make a boat more stable, and thus able to sail in more wind and, maybe, faster). Keith was selling big 150-300 square foot delta kites with inflatable leading edge tubes, for pulling three wheeled trikes over beaches and marshes. I looked through his exhibit and something clicked. Here was my inclined rig, available right off the shelf! I’d take Keith’s kites, my boat and controls, and “look out world!”

I designed and Keith built boats for the ’78 through ’82 international speedsailing events at Weymouth. We didn’t break any world records, but the development work, Keith with his kites and me with my boats and controls, was invaluable. We lost funding in 1983 and I started my own self-financed project. I came to Weymouth the next time on my own with the boat brand new, untested, and the entire crew picked up off the beach. There was absolutely no wind for 3 weeks and I went home skunked (and $12,000 lighter). I knew this happened occasionally, but preferably on someone else’s budget! It was very hard to sign the checks to do it all again the next year. To say the very least, I was pretty hopeful of good weather and a good showing. Minor things like customs snafus, international logistics problems, and adverse weather before the event meant nothing. I was ready.

Dawn Tuesday; the wind was blowing 25 mph, gusting to 30, from the preferred direction. This was directly offshore, over the low shingle dunes, creating nearly flat water with strong, non-turbulent wind right down to the water (really only perfectly “clean” down to about 20′ altitude. Friction with the water itself causes some turbulence, but only kitesailors can really appreciate this). The 75 best boardsailors in the world, culled from some 500 applicants, plus 15-18 sail “boats” (a rather loose term, as no two shared any common attributes. “Sailboat” here is defined as non-sailboard) were on the course trying to get timed runs in while the wind was blowing.

For traffic control purposes, sailboards must sail near shore in one direction during timed runs and offshore on their return. Larger sailboats normally sail even further offshore in rougher water, due to their greater draft requirements and to avoid congestion. Not me; my boat was custom designed just for Portland Harbor and can sail in one foot of water. I planned to sail inshore with the boards, in the flattest water.

Alas, it wasn’t to be. On the very first run, I was a bit too far offshore, and as I approached the course it was either abort and bear away offshore, or go for it. Of course, I went for it, right down the sailboard return course! Most of these guys had never seen a kiteboat before, none had ever sailed near one. For safety (my wire-thin lines sweep five feet off the water at 60 mph) most dropped their masts and dived into the water. I should digress here to mention that for (theoretically) faster speeds and simplicity in sailing the boat, I have no rudders. I think I have fair control without them. I can sail the boat “easterly” or “westerly,” “upwind” or “downwind”. I’m just not very good at swerving around objects smaller than, say, aircraft carriers. All of a sudden there were 30 or 40 boardsailors, dead in the water in front of me, and they couldn’t get out of the way! Worse, it had been eight weeks since I put the boat into its crate and I couldn’t remember how to steer it! (Let’s see . . . was it right foot to go left, or left foot to go right?) I only hit three sailboards, and didn’t crash the kites. The boardsailors all waved friendily (albeit most with only one finger) and yelled encouragement (though most seemed to encourage leaving town). All further runs that day were met with a totally empty course, any sailboards being curiously deserted. I finished the day with a spectacular crash when I fell off the boat, the kites wouldn’t crash (under certain conditions, they “helicopter,” circling fairly stably and hopelessly snarling the lines, and the boat flew, literally, across the course at 35 mph. The timers missed it, of course. No serious damage to boat or body (bent struts straightened, bruises survivable). No world records were in danger as I was still sorting our control settings and learning to sail in these “perfect” conditions. Early to bed and ready for day two.

The second day, and the third, featured variable light winds, lots of rain, and no sailing. Each night lots of wind was forecast for “tomorrow” and each morning lots “this afternoon”. On the night of the third day, completely without warning (heads rolled at the English Met), we had 90-100 mph hurricane force winds. This storm was entirely during the hours of darkness and partially wrecked the cities of Southampton, London, and Cherbourg, France. It was the worst storm to hit southern England since 1703.

We stayed in our rooms while slate roofing tiles were blowing off all over town and many chimneys fell. I simply wrote-off the boat. I didn’t want to drive to the beach, as we had to cross an open causeway, and we were driving a van . . .

At dawn the wind had dropped to 30 mph, so we went down to to survey the damage. There were 18 boat entries, total, all of which were up on the beach, tied down. 15 were totally wrecked or damaged beyond on-site repair; three had disappeared completely. The local community had lost or sunk 30 yachts and innumerable small boats. We had tied the kiteboat next to a large balk of timber, along with several others. The boats on both sides of us were gone and one nearer the water was partially demolished. And there was mine, with hardly a scratch on it! We went to the morning briefing to see where things stood.

Some 50 sailboard rigs stored in a large tent had disappeared along with the tent, and the Porta-cabin with the back-up timing computer was blown flat. The main computer was undamaged, the timing transits still stood, the wind was from the preferred direction, and so they opened the course! The TV cameras were rolling and we had the only undamaged boat. What an opportunity! But alas, our support boat had sunk in the storm and the local man who owned it and who had been volunteering not only the boat, but his time as well was committed to helping his neighbors dig themselves and their boats out. So favor for favor, we wrote off the day and salvaged other people’s boats. No great damage to the support boat (thank goodness, as I was guaranteeing its condition) and we built a lot of good will with the local boatmen. We were further consoled as the wind kept dropping and the best speeds were slower than on the first day.

The next day, Saturday, the wind was 20-25 mph, from the preferred direction and there were 2000+ people on the beach watching the show. We sailed both morning and afternoon and had great fun (I did anyhow; the crew grumbled each time I crashed the kites). I drank lots of salt water while being dragged underwater past the French TV cameras.

We kept changing rigs as the kites got wet and finally managed third fastest for the week in one class and second fastest in another. It turned out that this was the last good sailing day as the wind shifted direction and the course couldn’t be opened. As often is the case, the best conditions and highest speeds for the week were on the first day. This was a pity since we sailed as fast or faster on each succeeding day, in lighter and lighter winds, as practice took its effect. 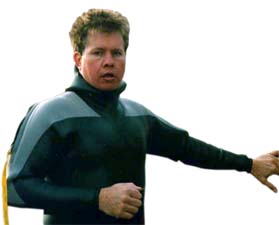 We sailed a lot the last two days, although the wind direction dictated sailing only out and back into the beach (the course is along the beach) in rough water. The boat is quite capable of sailing to windward, or downwind, but not fast. Sailboats generally are only fast across the wind.

In conclusion, the boat sailed up to its potential–30 mph–only for short distances, less than the length of the course, and then would fall off the wind and finish the run slowly. A combination of pilot error (practice, practice!) and an annoying but curable helm balance problem (curable by building a new boat!!) kept me fast enough to see the carrot on the end of the stick, but not fast enough to catch it!!

However, to quote actor Arnold Schwartzenegger, “I’ll be back!”