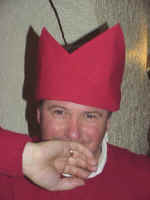 The response to my Trilobite Disaster last month was so overwhelming, that I decided to share the story of another shocking kite accident.

Jack VanGuilder was a president of the AKA who lived in the Seattle area. After he passed away, there were memorial flies all around the USA. At the time, I was the organizer of a large event here in Lincoln City, and we decided to do something appropriate in Jack’s memory.

The plan was to fly a white Eddy out of sight and cut the line loose. I got the kite, had a new spool of light cotton (biodegradable) line, and even picked out some fitting music. At the designated time, I shared a few well-chosen words over the microphone to the crowd of about 10,000, and then put the music on. But just then, the wind started to come up, and I had to find a tail for the eddy *fast*. Someone handed me fifteen feet of mylar, and I lofted the kite into the breeze. Everyone turned to watch it…

When the wind comes off the ocean in Lincoln City, it usually generates some turbulence as it passes the dunes and then the hotels. “Jack’s” Eddy was lifting well, but when it reached the sky over the hotels, it became a bit unstable. “My God”, I thought. “I’ve got this whole crowd watching, and the damn thing is gonna crash.”

Well, the kite didn’t crash. Instead, it looped down toward the power lines that served the hotels. “Even worse”, I thought. “It’ll get hung up in the lines and sit there for months as a withering memorial to Jack.” But Jack had other ideas. The kite looped around, nose up, and then suddenly dropped backwards.

Backwards toward the three transformers on one central power pole. I’ve never seen an electrical explosion before. Not just a few sparks, mind you, but an EXPLOSION – like a really good fireworks show and a loud BOOM!

Everyone stood fixated on the kite — everyone except for Susan who, knowing her husband was on the other end of the line, was straining to see through the crowd. Luckily, the line I was flying was brand new, clean, and dry. In other words, it wasn’t very conductive.

The kite was a different matter. It turns out, you see, that the mylar tail I was handed was actually computer tape made of mylar-coated copper ribbon. I couldn’t have picked something more conductive. It landed in the middle of those transformers and evaporated in a flash that made a bright sky in the background look gloomy.

A micro-second passed — or maybe three of four minutes. I’m not really sure. Then the showering sparks subsided and we all realized that the kite was still hovering there. Without the weight of a tail, it started to lift again. Too shaken to think, I just kept feeding it line.

I remember a fellow standing near me with a video camera. “Damn!” he said. “Wish I gotten that!”. Then, suddenly, there was another explosion as the last of the tail caught the remaining transformer. “Damn!” he said. “Missed it again…”

With the second explosion, the lights and sound came back on. The music resumed and the kite drifted out of sight. The crowd sighed.

I like to think that the whole episode was just Jack’s way of having the final say, or getting a bit of attention. When I rewound the music cassette, I discovered a two minute blank spot in the middle of the song. I never figured out how that happened.

Anyway, the end of the story is that Susie and I were staying in one of those hotels that night. After a long and stressful festival, we skipped dinner and headed for the Jacuzzi. But when we got in, we discovered that the water was only the slightest bit warm.

The manager noticed our discomfort and offered a quick explanation. “We just got the heater back on” he said. “Some idiot with a kite blew out the power on the whole north side of town”.

I gave Susie a quick, guilty glance, and muttered “Don’t say a word….”