Shootout at the K’zoo Corral 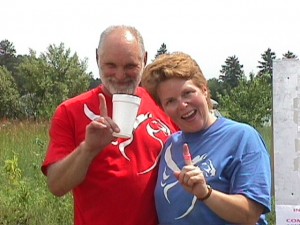 From its first occurrence in 1991, the Mid-American Sportkite Classic has been a highlight for Midwest sportkite competitors. The event organizers, John Cosby and Elaine DeRoover have made this event seem like a family picnic (quite an extended family, perhaps dysfunctional in some ways!)

The 1998 iteration of the event saw some major changes, while other elements have remained as before. This year, the MASKC was granted AKM National status, leading to a better than ever turnout of serious competitors. With this event being the last National before the World Cup qualification cutoff, all four of the US teams making serious bids for a World Cup invitation came to Kalamazoo for the weekend. In commemoration of this new-found status, the organizers promptly changed the name of the event to the “Kalamazoo Kite Thingy”. Obviously, success hasn’t spoiled Elaine and John’s sense of humor!

This event takes a different approach from most. Flier comfort and fun is the foremost consideration, with cold drinks and large sun shelters provided. Rather than having a banquet, a potluck supper is held in a large shelterhouse in the park that hosts the event. Like in all other areas of the event, the Saturday dinner is hosted with a healthy dose of good humor. The gathering is always called the “Road Kill Roast”, with a different theme being featured each year. This year’s theme was Other-worldly…hence, the “Alien Road Kill Roast”. Featured entrees included “insert here”… Dinner was capped by a night fly, and a bonfire that ran into the wee hours.

Even the awards ceremony carried the fun aspect to a new dimension. The podium was erected (I think it was the same picnic table used at the 1997 World Cup!), and the top three placers in each class were called up to receive their medals. A committee then chose a song to sing to the winners, and as the song was sung, a hail of peanuts in the shell rained on the victors. Truly nutty, but an hysterical way to end a fun weekend.

Spectators were well cared for also. Access to the flying arenas was through two narrow paths, as spectators arrived, they were greeted by workers with programs, and a lot of special attention.

With all the emphasis on comfort, fun, and zaniness, you might think that this was not a serious competition event. Sixty-three competitors registered, making this one of the largest in the USA, and definitely the largest in the Midwest, besting the AKM “All-American” at Grand Haven by over 40%. The competitors were here to have fun, but the primary aim was to claw and scratch their way to the top of the standings. Chief Judge Terry McPherson did his usual superlative job running the business end of things, managing an experienced crew of judges and scorekeepers. At press time, we learned that Terry has been invited to join the judging team at this year’s World Cup. Well deserved recognition, we say.

Saturday dawned hot and humid, with light winds coming from the south. By midday, the temperature reached 92F, but fortunately the winds remained reasonable for all competitors, but never becoming ideal.

After the morning pilots’ meeting, Al Hargus made a presentation of the new International Rule Book, scheduled for US implementation on August 1. Competitors’ concerns were discussed, and the new rules remained a topic of discussion throughout the weekend. Based on the comments heard at Kalamazoo, we are concerned about the acceptance of the new rulebook in USA competition.

Masters Individual Precision saw twelve competitors take the field. The event was flown in light and variable winds, leading to off-song performances by most of the competitors. Jeff Cooper took the top step on the podium, with Mike Delfar and Dan Brinnehl taking the remaining spots. 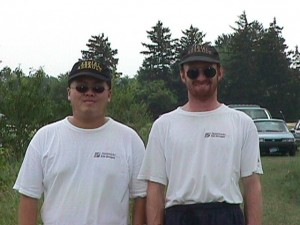 And now, ladies and gentlemen, the MAIN EVENT! With this year’s World Cup qualifying schedule being compressed into the first two months of the season, the Kalamazoo event found itself in the enviable position of being the final National event for the four teams making serious bids for a World Cup slot. Before the event, we did a tip sheet, owing to our background as serious players of the horses. Here are our pre-event handicaps…

2:1 Chicago Fire – NEVER count Eric Wolff and teammates out. Despite a late start to the season, this team knows how to win.

5:1 Windjammers – FIFTEEN YEARS as a team, but not regular players in a high-stakes game. Much better chance to sneak a top placing in ballet than precision.

5.5:1 – Shanti Air – Loads of experience, but inconsistent results. First year team with huge ambitions…is their reach longer than their grasp?

15:1 – Wind Wizards – Another first-year team, great folks with high ambitions, watch them next year. Can they shake their bad luck and questionable equipment choices at this event?

Well, how close were we? 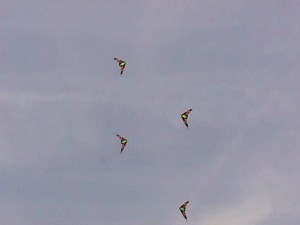 Saturday early afternoon saw the precision event. Shanti Air, flying Opus 8’s drew the first slot. Their compulsory figures were slightly ragged, but they followed with a solid, but not exemplary freestyle routine. The Windjammers and Wind Wizards both flew decently, but not up to the standards set by Shanti Air. Next came the Chicago Fire. They executed the compulsory figures better than anyone, and followed up with a precise, but relatively unchallenging freestyle.

After an hour’s wait for the results, it turned out that the Fire’s excellent compulsories were enough to make up for Shanti’s better freestyle.

Later in the afternoon, team Ballet was flown. The World Cup qualification parameters weight the Precision score at only 30%, with the Ballet counting for 70%, so no one was out of the hunt yet. The two hours between events saw visible tension displayed among many team members…no meltdowns, but knowing the players as well as we do, the desire was obvious. Best of luck to all of you!

As in Precision, Shanti Air flew first. Those of us who saw them in Wildwood know what this team is capable of. That ballet ranked with the best of the last few years on the circuit…those who had seen them in Ocean City knew the flip side…which team would fly today? The performance fell solidly between the high and low points of the ’98 season. The team seemed to have some trouble with the conditions, with several parts of the routine seeming somewhat random. That said, however, no crashes, no serious disasters, and six kites flying a demanding routine, would it be enough?

Next came the Wind Wizards. Their routine, flown with Aerie Diablos, was ultra-quick and snappy. Pinpoint execution took a backseat to choreography and perceived danger. Unfortunately, similar to their Wildwood experience, they suffered a broken line approximately 30 seconds from the end of their routine. This served to kill a decent ballet routine.

Meanwhile, in the pit, the Windjammers were facing a huge decision. They had their trademark Dynakite stacks set up, and also had Pro Dancers (single 8′ kites) set up. With the light winds, the choice, and luck would be crucial. They chose the Dynakite stacks, and flew a very smooth, if undemanding routine to great effect. The Dynakite stacks, with their flowing tails, drew a great response from the crowd, but what would the judges say?

Last came the Chicago Fire. Flying with five this year, they staged in with their Magnum Opus kites, landed, and did a team handshake. Flying the song “America” from “West Side Story”, they executed a very strong routine, obviously the winner.

How would the judges score the event? 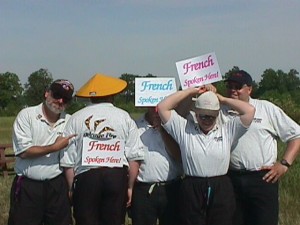 Chicago Fire swept the event! This gives them a virtual lock on a World Cup bid, their third. Windjammers are a scant 1.9 points ahead of Shanti Air, with the Ohio Cup event (June 27-28, Bowling Green, Ohio) being the decider. What a nice deal for the Bowling Green organizers….a first-year regional, and their event will decide the US World Cup qualifiers!

We hate this to sound like an afterthought, but now..Experienced Teams! St. Elmo’s Fire Drill and High 5 split the events, with High 5 coming up victorious in precision, with St. Elmo’s winning Ballet.

In summation, all we can say is that this event has the soul of a must-attend event for sportkite competitors. Due to its out-of-the-way inland venue, it is destined to have a low spectator turnout. A lingering thought that many of us shared throughout the weekend…if you could combine the genuine care for the participants, the “soul”, of the Kalamazoo event, with the beach setting of Grand Haven, could we have the greatest kiting event in the USA in the Midwest? Many of the attendees thought so……