This was the 6th running of the Southern Oregon Kite Festival, sponsored by KCRE radio and the Port of Brookings Harbor. Let me start by saying folks, that this one was a goodie!

This is not really a tradional style kite festival, but a packaged entertainment event. Top fliers from all over the country were brought in to perform for the large crowds. Brookings only has a population of 19,000, and it sure seemed like every single one of them came to the festival! 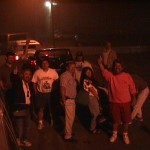 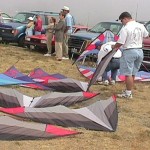 After fifteen hours of travel on Friday, we arrived in Brookings, greeted by a whole host of boisterous fliers. Indications were that major fun was going to be had this weekend! Upon entering the field Saturday morning, we were surprised to find a large crowd already assembled, all with lawn chairs, picnic hampers…ready for a full day. 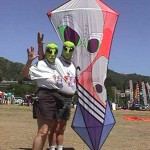 The flying arena was quite small. This turned out to not be a handicap due to the way flying acts were rotated. Each day, a schedule was posted, with fliers entering the field for a “set”. 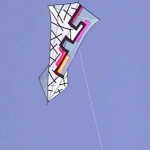 The field directors did a great job of rotating the types of entertainment to maximum effect – a team performance would be followed by David Gomberg’s huge Peter Lynn inflatables, followed by a Rev demo, followed by Ron Gibian kites….you get the idea. Additionally, the small field put the fliers in very close contact with the audience. It was wild flying our team demo, with a huge crowd behind us going “OOH!” AHH!” “Wow!!”. I had to buy larger hats after the event. Was this the fifteen minutes of fame that Andy Warhol promised me?

Saturday’s show ran from 10 a.m. to 5 p.m. At that point, we were bussed to a banquet, where a lot of silly fun was had. Next time you see Ron Gibian or David Gomberg, ask ’em about their basketball skills! The pictures below show Ron giving it his all.

At 9 p.m., it was back to the field for the night fly. We were warned that for the previous five years, there had never been enough wind for a successful night fly. Despite the previous lack of wind, the crowd for the night fly was even bigger than the day’s crowd. It seemed like Woodstock out there..the many vendors were hawking their wares, everyone had glowsticks, music was pumping, the light show was blasting through the mists produced by the fog machines….despite the lack of any winds, the crowd stayed until the very end.

Sunday dawned cool and foggy. Once again, we arrived at the field to find a large crowd already there, waiting for our performances. By noon, the sun had burned the fog away, leaving a glorious afternoon. Blue skies, smooth but light winds, absolute kiting nirvana. 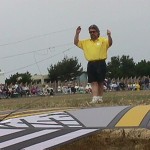 The day featured a grand return to competition for the Flight Squadron team. Seven-time US champions, and World Cup champions, the team left the competition arena five years ago to concentrate on demonstrations. It seems that the event had a limo company as a sponsor, providing a limo to the event in exchange for advertising. As Captain Eddie’s Flying Circus and the Flight Squadron had to leave for the airport at the same time, it was decided that they would face off in competition to select who would get the luxurious ride to the airport. 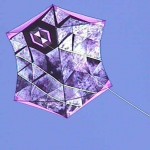 It was decided that the two teams would fly a precision set, then a ballet. The Bay Area Sundowners would serve as the judging staff. Pam Kirk and I flipped a coin to decide who would fly first. Pam and the Flight Squadron won the toss, and elected to kick off, oops, fly second.

Captain Eddie’s started off with their precision routine, followed by their 1996 ballet, “Right Stuff”. The crowd seemed to enjoy it, but what would the judges think?

The Flight Squadron took the field, flying with great precision. Next, the ballet…as we heard the opening strains of “The Battle Hymn of the Republic”, I knew that we would be riding in the van……. 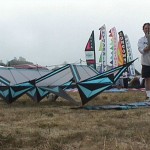 The judges split their decision, leaving it to the crowd to decide. Despite Captain Eddie’s best efforts to influence the crowd (the wave, payoffs, etc), the Flight Squadron were the clear winners. Champions again, this time in the “Limo Cup”.

At the end of most festivals, I am mentally ready to head home and get back to “real life”. Not this weekend, though; this event went by way too fast. Larry Goodman, Ron Gibian, and the rest of the staff do a super job of planning and running this festival. The Port of Brookings is a picturesque town, with great hospitality and a lot of things to do. We highly recommend a visit there next year for the festival, if you can make it, do it!

Oh, one final note about the ride to the airport. We watched the Flight Squadron get in the limo and ride away, then we entered the Ford van and took off. It turned out that the driver was the morning DJ for KCRE radio. We had the Howard Stern of Southern Oregon as our chauffeur! He decided that we didn’t have to speed right to the airport, and took us on a great tour of the sights of the area., narrated with great jokes and stories. When we got to the tiny airport an hour later, there sat the Flight Squadron, looking bored. Their limo sped them there and dropped them off much too early. Looks like we were the winners after all. 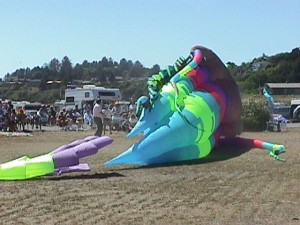