Bob White and myself woke up to a wonderful sunny day with a southeast breeze off of Lake Erie after spending the night in Bob White’s RV on the events kite field. All the last minute preparations were made and we were ready to go by about 10 am . The direction of the breeze began changing, coming from the southwest and was beginning to gain a little speed, we knew we had a perfect day for kiting ahead of us.

Kiters began arriving about 10 am, with the kiters parking lot filling quickly. Kiters embraced, shook hands and filled the field with colour. It did not take long for us to paint the sky with some wonderful colours, with the many different types of kites. At last count 85 kiters came representing the following clubs: Great Lakes Kitefliers Society (GLKS) from Buffalo; Kitchener-Waterloo Wind Climbers (KWWC); Toronto Kite Fliers (TKF); Mid Michigan String Stretchers (M2S2); Black Swamp Airforce (BSA) and the host club, the Niagara Windriders Kite Association (NWKA),. with many wanting to show off their stuff in the demo field.

Many kiters brought their banners which help make the ground look like one of the large kite event from the ground up. The banners were outstanding and the hard work in making the same was evident, with the crowds remarking on the colourful display.

Bob White did a great job introducing the flyers on the sound system,  giving an introduction to the different types of kites during the pauses between kite demos for the many spectators watching during the day. It was estimated the rolling crowd during the day reach about 12,000.

Bob’s son Jonathan did a great job with the CD and cassette player plugging in the requested music for demos though out the day for all the individual and team kiters.

As in the previous year, Dru ensured there was a non-stop supply of kite demos for the whole day, and when someone was not quite ready he picked his stack of 8 Revs or his single Rev and did a routine for the awaiting crowds. This year Dru had a walkie talkie to talk to Bob when lining up the performances, rather than wearing out a pair a shoes like he did last year.

“Spirits in the Wind” team, made up of Ron Clawson, Ardith and Charles Quanbury revved up the crowds with their fantastic kite demonstration. Of course, Ardith did her darling two kite routine, choreographed to Elton John’s” Candle in the Wind” which always delights the crowds. 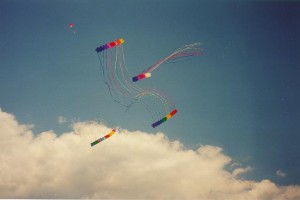 Four of the Niagara Wind Dancers team (made up of Chris White, Doug Niznik, Al Lee, and Dru Nelissen) also did a couple of routines with their 4 Dynakite stacks which were one of the spectator highlights of the afternoon. We can not forget about our dear friend and retired world champion, Jim Poy, who did a superb single dual line routine with some of his well known intricate maneuvers.

Many individuals like Al Lee, Allen Noble, Jerry Lewithan, and Vaino Raun did a great job with impromptu routines. Hey guys, we won’t tell the spectators that this was your first time. Others attempted to do a routine, while others were “shy”, but we will be requesting their performance again next year; eh John?

This year we introduced Karen and Irving Reid and their Para-Bear Squadron for the first time to this kite festival. The crowds, especially the children, just loved the show. Tickets for prizes were drawn, placed in the pockets of the para-bears, sent up to a kite, and then the para-bear was released parachuting down to the ground. Parents and children are still talking about this today. We hope Karen and Irving will be back next year. The Reids also participated in the Rok Battle noted below. 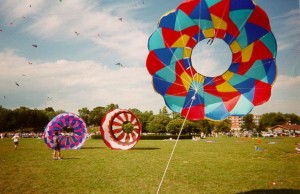 A variety of single line kites coloured the sky with over 50 kites flying at many times during peak points during the day. Assorted line laundry painted the scene over the park and the marina. Merve Cooper’s Canadian Kite Arch, Maureen Lewithan’s Snow Flake, Mike Decker’s Cody, Ed Hummel’s Bols (pictured at left) and Rok, Carlos Simoes’ Rokkaku, Eric Curtis’s and Anne Sloboda’s Boreal Delta and Rok, Vince Baish’s Sutton along with his monkey friend flying his kite, and Gary and Michelle’s many colourful kites. There were many others that help fill the sky and we thank them as well for making this the biggest and best Canal Days Kite Festival ever held.

We also introduced a Rok Battle, which began with 12 kites. After a wild and tough battle an international tie was declared. Michelle Welsford of TKF and Allen Noble of GLKS shared the position of being the champions for 1998. There will most likely be many who will challenge to be champions for 1999. 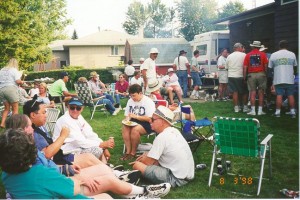 After a full day of colour, laughter, and a whole lot of fun it was off to the annual barbecue hosted by The Niagara Windriders at the home of Donna and Dru Nelissen. There were total of 65 kiters in their back yard (good thing it didn’t rain as Donna would not be able to handle this many people in her house) enjoying the food and talking about the days events and kiting. Special thanks go to Donna Nelissen, Marlene Niznik and Chris White for arranging for the great food. Also, thanks go to Pat Poy who helped Doug Niznik with his superb barbecuing . The burgers, hot dogs and corn were done to perfection. Tickets for a 50/50 draw and bottle of rye were sold during the day, with the draw taking place at the barbecue. Congratulations to the winners!!! Thank you Doug Niznik for donating the bottle of rye and for bringing his bubble machine..

As usual an event like this is not possible without the assistance of a great number of people.  The Niagara Windriders want to thank the following:

A special thanks to the kiting couple who came the longest distance to Port Colborne. Frank and Donna O’Neil who came from Oldcastle Ontario, near Windsor, we thank you for your help. AND ALL members of the Niagara Windriders who took part in the event itself and planning.