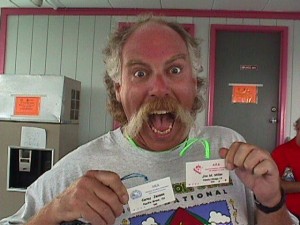 Hey again… This time let’s talk about the differences between two and four line power kites and their use as buggy engines. Where ever you see buggies, quads seem to be the popular engine of choice among buggy riders. Does that mean they are the best for the job? Not necessarily.

The four-line quads are definitely the easiest to use, especially for beginners, with their ease-of-launch and landing. The shorter lines on the quads also make running in a pack with other buggies as well as getting into and out of tight spots less of a bother. (Sidebar: Quads generally use shorter lines (50-75 ft.) as four lines quadruples the line-drag over dual-line kites)

Quads tend to be flown without a lot of movement in the sky except for a bit of up-and-down to increase the power when needed. Quads are also usually out close to the edge of the wind during crosswind and upwind runs. When running downwind they are more overhead and swinging back and forth to counter the movement of the buggy. The quads require less constant attention from the pilot

Dual-line power kites use their longer lines (125-175 ft.) to sweep across the sky and generate more power. Often, however, part of that sweep actually robs the buggy of some speed by forcing the buggy to steer downwind a bit. On the plus side, dualies can access smoother winds aloft. This has been illustrated to me each time I try to buggy in Florida.

No matter which Florida coast I try, the Atlantic or the Gulf, the winds always seem to be coming off the land. Florida has also allowed condos and hotels to be built right along the beaches, screwing up the winds for kite flyers and buggy riders. Dual-line power kites can rise above much of the turbulence. Quads, however, with their shorter lines, get caught in the crappy, turbulent air behind these man-made wind-walls, rendering the moment less than what it could be.

Standard quads like the SkyTigers and Quadrifoils are very popular with all levels of buggy riders. Power kite manufacturers have noticed the popularity of quads and the newest power kite models look like the most efficient dualies with quad-line controls. The PL N-Gen and Paua, the Quadrifoil C series, the Concept Air models, Jo-Jo’s, and other European power kites offer the best of both worlds with a tapered elliptical wing shape and four-lines for precise steering.

So… Which one for you? Well, everyone has their favorite… Often the model one flies first and is the most comfortable with becomes the kite of choice.

Of course, buggy racers are always searching for the fastest kite, but skill and speed do not come in a bag. They come from practice. So get out there and BUGGY!