Now that Kitelife has gone bi-monthly, I will try to include profiles on more than one kitemaker in each edition. In which case, there are separate articles for each kitemaker.

This profile looks at Richard Gareau from Laval, Quebec in Canada. Richard has earned quite a name for himself as a fighter kite manufacturer and a champion kite pilot. He has been a kite fanatic for over ten years now and has won numerous awards and attended numerous kite festivals.

Find out more about Richard and his Patang fighter kites.

Location : Resident of planet Earth (most of the time).

Music: Everything but I prefer Classic Rock or Jazz.

Book : Lord of the Rings

Kite Book: Kite Journey through India. (but only because there is a line that has my name in it … :))

Tell something about your background Richard!

Born in 1962 in Laval, Quebec, Canada. I was fascinated by flight at a very young age, much like my father, an Air Force veteran, I was introduced to flight as a hobby by my father who was the first person to fly a remote control model airplane in Canada. Aeromodelling quickly became my hobby too, and at the ripe old age of six, I entered my first competition. In those days there were no junior categories so I competed against adults, and did fairly well placing in mid-field. Most of my youth was spent going from competition to competition with my father, travelling most of the North Eastern American continent. In those days it seemed to that kites were a little childish and very low-tech compared to my R/C airplanes and never really caught my attention.

This all changed in January of 1987 when I went to my first kite day/festival. I was attracted to this kite day more as a photo enthusiast than anything else, the sky was pure blue, not a cloud to be seen and the Quebec winter air was crystal clear that day. This seemed a perfect background to beautifully colored kites and a great opportunity for picture taking. Well, to make a long story as short as possible…. I was so impressed by the kites that I just had to try them. I took the commands of a dual line stunt kite and was immediately hooked …. This was grrrrrrreat, much like model airplanes but sportier, no oily mess to clean after the flight and kites did not go back to kit form if crashed … And by the way … I never took a single picture that day…

A couple of months later ( and several hundred dollars) I quit my job to start working in kites, reading and studying every piece of kiting information I could get my hands on. My passion for kites had now spread beyond stunt-kites to all forms of kiting. Ten years later this passion never seems to stop growing, I never seem to stop learning and all the different aspects of kite flying still mesmerise me. Over the span of those ten years I participated in, or helped organise several kite events.

Have you had any recent competition wins? 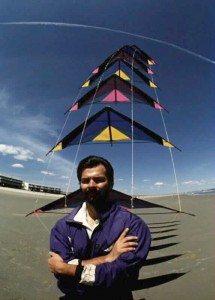 What about workshops Richard, have you ever taught any?

Yes, I have taught quite a few worshops over the years, the most recent ones were:

Who has had the most influence on you in your kite making?

Robin Parent of Montreal was by far my greatest influence in kite making. He is still one of the best kitemakers I know.

What are you philosophies on kite-making Richard?

My way of seeing kitemaking is simple, never use somebody else’s plans, only make a kite when I’m positive I studied it long enough to truly understand it and never EVER give up, even if it doesn’t fly the way I want it to the first, second or twelfth time I modify it.

My favorite flying site is Wildwood Beach, HUGE beach, great winds and Genova’s Pizza ( and Stromboli). It simply does not get any better! 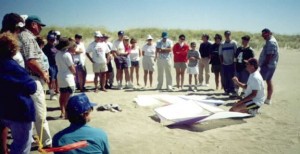 Which is your favorite kite, of the ones you have made?

The most rewarding kite I ever made has to be the Patang, because of the way it flies. It has allowed me to introduce several newbies to the art of the fighter kite. I have sold well over 1500 Patangs so far, so what a kick it is for me to show up at kite festivals everywhere and see people flying my kites. (I know they think they bought them when they paid for them, but I really let them just play with for that price …. They will always be MY kites.)

My favorite kite that I made is a painted Patang that is now owned by Terry McPherson (the lucky BUM…) That kite has a special bridle and different bow curve; it flies better than any other kite I ever made. The only reason Terry has it is I was convinced at the time I could make another one just like it …. I’m still trying ..

Which is your favorite kite, of the others?

Pretty much anything made by Bobby Stanfield.

Who are your favorite kite personalities?

That has to be Ron and Sandy Gibian. They are so darn perfect and really good friends. 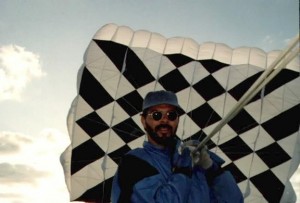 Where is your favorite Kite festival and why?

Damp’s Drachenfest. It was my first European kite festival and still holds a special place in my heart. Of course Dieppe is nothing to sneeze at either and the first Verdun kite festival will always be dear to me ’cause I got to invite all my friends to that one …

What is your best kite experience Richard?

Whenever I get a non-kiteflier hooked …. 🙂

What kites would you take to a kite festival if you had your pick of any kites in the world?

Well, I can’t see myself going to a kite festival without a Patang, but I also love to watch a good rokkaku flying. Ever notice how the top and bottom spreader twist around absorbing the turbulence in the wind while the rok stays perfectly stable? Sort of like a bird on a thermal … the bird is stable, but its tail is constantly moving around. It fascinates me that the rok seems to have that kind of instinct. I also would bring a Rev and a couple of ultra-light stunt kites (probably even a Pizazz).

Any other comments before we go Richard?

There are things I really love about kites, the endless learning of aerodynamics and the physics, the new appreciation for different cultures and artistic expression, but above all the simple pleasure of a soft breeze and good friendship.

You said it all Richard! 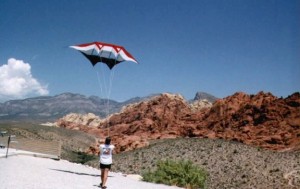