Hello all! My name is Hunter Brown. I am a 21-year-old college student in Wilmington, North Carolina. I have been flying sport kites for about 14 years. I have been working in the kite business for the past ten years and I am currently working at a kite shop in Wilmington called Blowing in the Wind. I fly many different kinds of kites, single line, dual line, quad line, indoor, buggy, kite surf, and occasionally a fighter kite. I am mostly a trick flyer though. For almost a year, I have been a demo flyer for Dodd Gross. This has been a lot of fun. I have learned a lot about kiting and met a lot of great people. I also have messed around with sewing and designing a bit. I have made some single and dual line kites of my own and really enjoy it. I try to be a well-rounded flyer and do a little of it all and fly as many different kinds of kites as possible. I am very excited to be doing reviews for Kitelife. This is my first time doing reviews so I would appreciate any feed back you have to offer. Also, if there is a kite you would like to see reviewed please let me know and I will see what I can do. I hope you enjoy my reviews and I hope they are helpful. 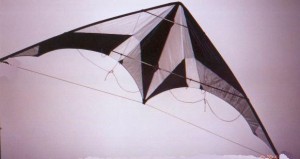 The Matrix was designed by Andy Preston to be a team style kite that would do the modern radical tricks. When I received my Matrix it was packaged very nicely in a bag with the Matrix logo printed on it and a Velcro closure and pocket. There are very good instructions for putting the kite together. It also comes with extra tensioning bands, or rubber bands, which are used on the wingtips instead of bungies. It also comes with two bridles. The one on the kite is a turbo/dynamic bridle and there is also a three point static bridle supplied. The frame is Skyshark 5P non-tapered rods with hard rubber molded fittings which give the kite a clean look. Once you have the kite set up, you notice that it has an unusually long turbo/dynamic bridle. It comes way out from the kite. The Matrix also has what they call an “automatic tensioning system” for the tension line. Instead of the tension line tying off to the nock at the wingtip, it is tied off to a rubber band, which then goes over the nock. This is supposed to keep the tension line from being too tight. There also is an optional trick line supplied. The Matrix has a very deep sail, all the way up to the nose which is held tight by two sets of standoffs and one set of battens for the winglets. It has a 14 panel, Icarex P31 sail that is sewn together with very nicely finished off seams. There is reinforcement where needed along with a Velcro release spin.

The first day I went out to test the Matrix there was a nice wind, blowing 5-8 mph. I first flew the Matrix with the stock, dynamic, bridle on the factory set marks. The kite flew well but did not seem very crisp in corners or as responsive as I expected. So, I moved the bridle a bit below the mark. This made a big difference. The kite got a bit faster and much more responsive. Turns became sharp and corners were crisp and exact. When doing spins, the kite would turn way inside itself, somewhere between the two sets of standoffs. There was some noticeable oversteer coming out of spins, though. Flight was very smooth and quiet. Tracking was excellent and it was very easy to fly a straight line. The Matrix has a relatively high aspect ratio for a precision kite but this does not seem to affect it. Precision was very good and easy. I am not the best precision flyer but I could cut nice corners and figures in the sky. It was easy to stall and land and it would hold a tip stand very well. Tip stabs were also done with ease. It was a bit difficult to get the Matrix to hold a stable stall but this may be because of the dynamic bridle.

The Matrix also can hold its own when it comes to trick flying. It does require a bit larger hand movement to execute tricks, and the rotations are slower due to its large wingspan. Axels are easy and relatively flat and graceful. Cascades, cointosses, rotating backflips, and slot machines are all performed with ease once you get used to the larger hand movements. Even flip-flops and fountains are possible. The trick that the Matrix really excels at is the fade. If you pop into a stable fade out of an axel, the kite will just float there effortlessly. I was able to hold both straps in one hand and take a break while the kite just holds there itself. The wind was a steady seabreeze, so that did help. Rotating fades are even possible on the Matrix. It is a bit hard to get it out of the fade. The Matrix does not seem to want to flic down out of the fade position. You have to give on line a sharp pop to get it to flip over. Also, it is difficult to get it to flatten out for flat spins. When you do get it to flatten out, flat spins are slow, graceful, and have a lot of float.

Next I put on the static bridle. They call it the aircraft bridle because it is the one that team AirKraft designed to use in competition. With this bridle, the Matrix stalled much better. It was easier to hold the kite in a stable stall. Side slides were long and smooth. The kite did seem a bit more wobbly when flying a straight line though. It still had good precision but when you came out of a turn it did have a bit more wobble. I was a bit surprised that this was the bridle that AirKraft used but maybe it can be adjusted out. With the static bridle all the trickability was still there.

The next time I flew the Matrix the wind was stronger, blowing about 12-15 mph. As expected, the pull increased and tricks became harder. It was possible to stall the kite and keep the wind out of the sail to do tricks. The characteristics of the bridles changed though. The dynamic bridle seemed more slow and sluggish and the static bridle was faster and more responsive. The static bridle lost its wobble when flying a straight line and coming out of turns. In this wind the Matrix is much more of a precision kite than a trick kite.

In conclusion the Matrix doess what it was designed for. It is a kite that can bring the modern radical tricks into competition precision flying. It will fly in light wind due to its light construction, and handle higher winds as well. In lighter winds it performs good tricks and excellent fades, but this becomes more difficult in higher winds. It is easy to do precision even if you are not a precision flyer. The Matrix is an expensive kite but it is made of high quality materials, an elaborate sail, and a high level of craftsmanship. If you are a competition flyer looking for a kite series to fly, this is a good one. There are also ultralight and vented models available.

The test kite was provided by Andy Preston and Flexifoil International. 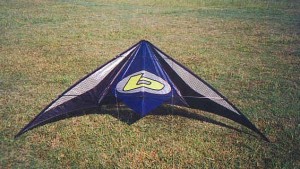 The Outerspace is the first kite marketed with Andy Wardley’s Active Bridle system. It lives up to the standards of craftsmanship that we have come to expect from Tim Benson. The Outerspace has a polycarbonate Icarex sail with an appliquéd Benson logo in the middle, trimmed in black. The version I tested has Mylar laminate around the logo and on the wind panels. Seams are laid on top of each other and taped and sewn together. Reinforcement is in all the needed areas and there is a Velcro release spine. The Outerspace is framed in 6 mm, high modules, pultruded carbon rods. The fittings are made of a hard black rubber and as in all of Benson’s kites, they are finished off with a very clean look, right down to the Dacron on the wing tips. There is a tension line for quiet flight and a unique trick line. They call it an “Active Trick line.” There is about a foot of bungi on both sides of the tail. The trick line goes from the wing tip and ties off to the end of the bungi. This is supposed to keep the trick line from being too tight at any time, and improves backflip capability.

I was very interested in trying the Outerspace and seeing how the active bridle affected flight. The first time I flew it the wind was blowing about 10-12 mph. Flight was very smooth and silent, with only a moderate pull and fairly fast. The kite had a very solid feel and tracked a straight line very well. Spins were very sharp with it rotating well inside its wing tip. The active bridle is supposed to give precision and trickability by only allowing the bridle to move as much as it needs to. Flying the Outerspace proved this to be true. The Outerspace had very good precision for a freestyle kite. It would cut exact, clean corners and good figures. It also would do about every trick in the book, and create some new ones. With the active bridle It offered unique control in the flat position such as axels and flat spins. Multiple axels were very easy and wanted to keep going. Slot machines, fades, cointosses, and reverse cointosses were all done with grace. I was also able to do cascades, flip-flops and fountains with the Outerspace. The only trick that I did have some problems with was the rotating backflip. It held on its back fine but did not seem to want to rotate. Modifying the trick line could probably solve this. The Outerspace was easy to stall and would hold in a stall very good. It was easy to perform smooth side slides through the wind window.

All of my reviews are my opinion and my experiences with the kite. If I say it did not do something that does not mean it is impossible, it just means I could not do it. I encourage anyone to fly these kites and form your own opinion. I do fly with Dodd Gross but I try to stay unbiased in my reviews. Any questions, comments, or feed back is welcome. I am new at doing reviews and would love to hear what you think. Thanks a million and go fly a kite.