The Newest Member of Kiters Anonymous 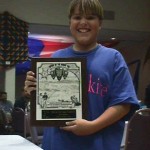 It’s a problem we’ve all had: not enough money to support a serious kite habit. With registration fees beginning to approach $100 for some events, it can be expensive to be a top sport kiter. And that’s for those of us with jobs. What if you’re only in 8th grade?

That was the problem facing Newport’s David Franzi. Flying at events in Wildwood, Narragansett, and Newport, the 12-year-old qualified for the AKA Grand Nationals in Novice Individual Precision, but the cost of getting himself and mother Robin from coast to coast was prohibitive. So creativity set in.

The pair started by going restaurant to restaurant in Newport’s tourist area. But restaurant owners were hesitant to pony up cash, and suggested a raffle instead. Next problem: state law prohibited a raffle for personal gain. So they incorporated as a committee, and got a raffle license from the Rhode Island Gaming Commission. With the bureaucracy out of the way, they got down to business.

A phone call to radio station WADK for advice turned into a live interview. David spent most of the time on the air explaining the sport of stunt kiting. Afterwards, the “Newport Daily News” called, and soon there was a front page, full color article in the paper. “It took on a life of its own,” said Robin.

Checks started arriving in the mail. People weren’t even asking for raffle tickets, they were just sending money. (Robin gave them all tickets anyway.) Even her landlord kicked in $50. The assistant principal of St. Michael’s Country Day School, where David goes, called to offer help. The school held bake sales, David did a kiteflying demo at a school assembly, and soon the school presented him with a $500 check.

The best part, though, was door to door sales. The Franzis covered their neighborhood, and found that not only were people supportive, but also interested. They spent a lot of time talking about kite flying with complete strangers, and nearly always sold raffle tickets. On their own block, of five houses they went to, all five bought tickets. They sold between 3000 and 4000 tickets.

The raffle was held live on the airwaves, courtesty of WADK. They gave away limousine rides, gift certificates to restaurants, movie tickets, a jeweler’s gift certificate, and several other prizes. All in all, they raised nearly $1100. It paid for their airfare, hotel, and convention registration.

Getting there was half the fun. Flying was the other half. Using Dodd Gross’ new Precision, David took home a Third Place trophy. WADK was anxiously awaiting the results, and the Franzis made sure to fax them the scores the day after the awards banquet. Now he’s planning out a ballet routine and getting ready for a year of Intermediate competition. With the formation of the new regional league in New England for Novices and Intermediates, he should get plenty of air time.

David got his start at the ’97 Newport competition, and then, “It became an addiction.” And like an addict, he’ll do almost anything to fund his habit.