At the AKA Convention, we were saddened to learn of the death of Olan Turner, one of the founders of kiting as a competitive sport. 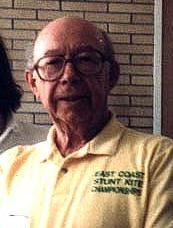 I met Olan Turner for the first time at the 1983 Columbus AKA Convention. I didn’t realize then how influential this man would become to me. I attended my first East Coast Stunt Kite Championships in 1987. The “sport” of dual line competition was very new at the time and much of what we did on the field was being designed by the people at this event. Olan Turner and Mike Carroll were hosting a judges seminar. As far as I know, this was the first such class of its kind in the nation. I was very interested in becoming a better contestant and wanted to learn more about actual judging. So I signed up and attended it. Olan gave most of the lecture on judging ballet competitions.

Olan played the violin and was an avid music fan.  He and Mike Carroll had traveled to other sports events that involved music and movement being judged. They studied figure skating and drum and bugle corps competitions. They discussed judging criteria with the officials of those events. Olan helped to create the background and history for sport kite ballet judging that everyone uses all over the world today.

One of my personal highlights in sport kites involved Olan Turner. In 1989, I was spending much of my time at events as a judge. I was very excited to have achieved the expertise in judging and had received a judging assignment at the ’89 East Coast event as Head Judge of one of the ballet events. Being Head Judge of an event in Wildwood isn’t assigned to just anyone. It is a position of responsibility based on ability and experience in ballet judging. You cannot imagine my pride and sense of accomplishment when I learned that Olan Turner was assigned to MY judging crew. I will always remember how Olan told me that as Head Judge of the event I was in charge. He said that I had earned the right to that position through hard work. Olan never needed to be in front, but he did need to see people do well.

Olan Turner was not always serious. I remember that during the 80’s, Olan hosted an event in New Jersey every December for many years. This kite event had the unlikely title of “The Annual International Open Peanut Butter Cookie Kite Fly and Bake Off.”. The idea behind this very silly event was to enter a combination of kite and cookie both of or about peanut butter. Olan was the only judge for the event. (Secretly he admitted that it was a great way to have people send him cookies.)

Charlie Sotich from Chicago was a big fan of this event, and hoped to share thejudging duties with Olan. In 1987 Charlie Sotich and Jack Van Gilder “invented” about four months of Chicagoland Skyliner and Washington Kitefliers Association newsletter articles based on the T A I I O P B C K F & B O (Abbreviated title for the Peanut Butter event invented by Olan) The WKA people said , “…this cookie thing is silly and not kiteflying…” The Skyliners said, “the Washington Kitefliers were bluenoses…” This was all in good fun. It went on for several articles and was designed to help generate interest for the long winter “no flying” months. Olan helped it all by publishing the recipes for Charlie Sotich’s cookie along with the winning kite plans. It was great fun and helped to promote kiteflying as a “Fun” hobby all throughout the late 1980’s.

Olan has influenced many kitefliers across the country with his knowledge, his sense of order, his humor and his friendship. In the last few years, Olan had trouble making it out to the competition fields because of poor health. When he did make those visits, always accompanied by Bernice, his wife, it was as if the George Washington of sport kite judging had arrived. The skies and the competition fields really will be empty without him.

In 1986 Olan Turner was awarded the Edeiken Kiteflier of the Year award. This is the highest honor a kiteflier can receive from the American Kitefliers Association.

In his acceptance speech, Olan spoke of the support and love given him by his wife, Bernice.