The small resort town of Ocean Shores was overrun by 400-odd kiters, all bent on having a great week of kiteflying before winter deals a fatal blow to the 1998 season. This year marked the end of a remarkable 12 months for the area, with three of the top kite events on the continent held in Ocean Shores or Long Beach… World Cup VIII, the Washington State International Kite Festival, and now, the AKA Convention. If you are native to Washington, this is a great thing; if, like me, you live across the continent, you racked up the Frequent Flier miles.

Entering Ocean Shores on Tuesday, we stopped at three kite stores within a five block area. Terry Murray, who was travelling with me, asked a clerk at the last kite store where he could buy shoes, as he had left his pair of sand boots at home. She told him that the nearest place to buy shoes was at Wal-Mart, forty miles away! This is my kind of town, three kite stores, no boring shoe stores! (The punchline of the story is that the clerk had a pair of boots that she had bought for her husband stashed in her car. He didn’t like them, she was going to return them to Wal-Mart after her shift. She showed them to Terry, they fit, he liked them! Sale made on the spot.)

The Shilo Motor Inn served as the headquarters hotel. Compared to the last few years’ hq’s, this was the Taj Mahal. Beautiful rooms with kitchenettes, 3 TV’s, including one in the bathroom! The conference rooms served their purpose well, hosting the numerous workshops, meetings, and symposiums throughout the week.

After my first two hours in Ocean Shores, I had a good feeling about this convention. I was not to be proven wrong. 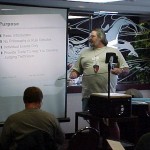 A big part of experiencing an AKA Convention is participating in the numerous workshops, covering virtually every aspect of the sport. From viewing the following list, you can figure that planning which workshops to attend is a key point! This is only a partial listing of the workshops offered at this year’s AKA.

Top kitemaker Larry Mixon led this class on how to do intricate appliqué work.

Kites in the Classroom

Dan Kurahashi led this exploration of the world of mini kites

No, not the truck.. a semi is a Japanese cicada kite. Taught by J.R. Tolman, the class made great little kites.

Mel Hickman gave this overview of the Association.

An overview of all the Internet resources relating to kiting.

Led by lunatic Jeff Howard led this field seminar. The attendees sure got dirty, but all had huge grins on their faces.

This workshop included shadow judging during the sportkite competitions.

Presentation about the Drachen Foundation, and Samuel Cody.

Make Your Kite Festival a Success

Roger Chewning divulged the secrets he has learned in his years as the major domo of Sky Festivals.sympo.JPG (61734 bytes)

After the last few years’ acrimonius affairs, this year’s symposium was surprisingly pleasant and productive. While no solid consensus was reached on many of the issues raised, it seems an almost universal wish that the AKA and American Kite Circuit find more common ground to benefit the competitors, and the sport.

For sportkite competitors, the AKA convention is an invitational event. To qualify, a competitorrich.JPG (33403 bytes) must place in the top three in his class in his geographic conference. This year’s AKA saw a higher level of competition than last year’s though probably not as fevered as the ’96 event in Santa Monica. The Santa Monica event was also the AKC All-American for that year, which contributed to the high level of competition.

Bill Rogers and Susan Shampo were the class of this field, with Susan besting Bill in Ballet competition, with the opposite result in precision. Jason Adame took third in ballet, with Dvid Franzi taking the third slot in precision.

Ballet saw KiteLife’s own Phil Napier taking a close victory over Torrey Lindemann and Alan Brooks. In precision, it was Alan winning, over Torrey and Fred Marchand.

The performance of the event was turned in by Shane Snowden in Individual Ballet. Flown to the theme from Mission Impossible, his ballet featured spot-on execution of amazing tricks, capitalizing on virtually every beat and accent of the music. Watching this ballet was enough to raise the pulse rate of anyone watching. Young Shane has quickly joined the ranks of the world’s top dual line fliers, and should do nothing but improve further as he faces more competition challenges. Nicknamed “Matchstick”, due to his red hair and slim build, Shane is definitely one to watch in the future. Michael Weingand and Miguel Rodriguez took the other two podium slots in MIB.

Individual Precision was flown in super-light winds, preventing the pilots from showing all their craft. In a surprise finish, Mike Delfar took the nod, over Scott Weider and Kobi Eshun.

Individual Quad had Ron Despojado taking a super-slim (.4) victory over Lam Hoac, with Penny Lingenfelter in third. Masters Pairs had (surprise!) Dos Avispas besting Papalotes and K FAN. This event marked the final competition for the present lineup of Avispas, with Kobi Eshun leaving, and Brian Champie stepping into his spot as Miguel Rodriguez’ partner.

Masters Team ballet was the awaited showdown between Bumperkites and Don’t Panic, both 1998.10.16@15.47.52.jpg (17464 bytes)flying on their home field. A broken line ruined the day for Bumperkites, with the judges hitting them hard for losing the final few seconds of their otherwise-great ballet. Indeskyze and Valli Boyz also performed well. Don’t Panic took the tight win over Indeskyze, with the Valli Boyz a close third. Counterbalancing the glum faces on Bumperkites, Indeskyze was ecstatic over their1998.10.16@15.37.56.jpg (55519 bytes) performance. Team member Al Washington commented to us “This is the first time we have ever gotten through the whole routine in competition!”. Well done, folks.

In the Team Precision event, Don’t Panic took a clear victory over Indeskyze, with Bumperkites in third. Next season should see some interesting combat among teams.

Complete scores are available at www.aka.kite.org

WOW! That is about the best word I can think of to describe the fighter kite fun at the AKA Convention.

In addition to great fun flying and competing, meeting fighter flyers from all over the country was even more fun. And to top it off we were able to spend time with and learn from Tal Streeter and Stafford Wallace, world class experts in their respective fields.

Plus, Jeff MacInnis conducted an awesome fighter kite making workshop. The room was packed, and the earlybirds each completed a kite kit that Jeff had assembled. The kite they made was Jeff’s ultralight kite “The Silhouette”, a dream to fly.

For the first time at an AKA convention there were 2 fighter kite competition levels, novice and experienced. And also 2 competition areas, touch combat and precision/skills competition.

There were 8 novices competing in both combat fights and precision or skills competition. In the precision/skills competition, the flyers were required to do specific maneuvers with their kites within a given period of time to earn points, top score won.

In the novice line touch combat competition, a single elimination format was used to determine the top 4 flyers. A 2 out of 3, bottom, top, bottom, line touch was the used. Then the top 4 had a fly-off in a round robin on Saturday. In the round robin, there were 3 points for each match, bottom, top, bottom. Each point counted 1 and accumulated for each flyer for all his/her matches. After each flyer fought each other flyer, the total scores were added and high score won. In the event of a tie, a sudden death, 1 point, a top point, was flown.

On Saturday, the day of the finals, the wind was blowing 18 – 22 mph!! Very difficult conditions for everyone, including the spectators. The flyers really had their work cut out for them! Each battle was very close, In fact the battle for 1st and second ended in a tie, so the sudden death single point was flown. You should have been there. Al Councilman and Terry McPherson were the two flying the sudden death point and they flew a very long and strategically challenging point. Then just at the last moment, Terry stepped on the circle, causing a foot fault and that decided the point. The novice competition final results are:

1st – Al Councilman of Tacoma, WA, flying a “Bird of Prey” fighter made by Jim Wilson of Ocean Shores Kites.

The final results of the novice skills or precision competition:

Congratulations to each flyer who participated in the novice events.

1st Brian Johnsen of Renton, WA flying a “laser wrap” kite he designed and made.

2nd Joe Vaughan of Mifflinville, PA flying a Grandmaster; Joe is the maker of Grandmaster kites.

One of the differences in the experienced category versus novice was the single elimination preliminary heat used a 3 out of 5, bottom, top, bottom, top, bottom, format. But the final 4 did the same style round robin using 3 points for each match and each flyer flying against each other flyer, totaling each flyer’s accumulated score to determine the winner.

The battle for each point in each match was enough to take your breath away! Back and forth,fighters.JPG (23148 bytes) one taking the advantage, the other escaping, then in a blink of an eye, the reverse, and reverse again and so on. All of this taking place in 18 – 22 mph wind! It was soooooo much fun to watch.

Here is the outcome of the final 4 round robin for the experienced line touch combat competition:

1st Jeff MacInnis of Portland, OR flying a mylar kite he designed and made.

2nd Bruce Lambert of Ocean Shores, WA flying an Orcon kite he designed and made.

3rd Rick Miller of Silver City, NM flying a ripstop kite a friend of his designed and made.

Congratulations to all of the experienced flyers who participated in the competitions!

Nelson Borelli was the chairman and mastermind of the expanded fighter kite program at the AKA convention this year. Both Brian Johnsen and I added our 2 cents every once in a while just to add some feistiness to the process. Thanks Nelson, a great job!

And many, many thanks to each person who volunteered to judge and to be field crew members, without them none of us would have had such a fun time.

I will share with you an observation I made. It was the kites and the way they flew, with maneuverability and the high forward speeds they achieved. It seems the evolution of kite design has made a noticeable step toward a kite design that is more optimized for the short line combat competition compared to more typical fighter kite designs. It is both interesting and is an observation that presents an opportunity and challenge to us who like designing and making fighter kites. Let’s get busy, let’s get imaginative, let’s fly more!!

Keep your feet off your line, you’ll grin more!

The highlight of the kitebuilders’ year is this competition. Below, we will show you pictures of all the first-place finishers.