Welcome back to Kitemaker Profiles for November/December! This issue we will get an insight into two award winning kitemakers from the US. The first, Larry Mixon, is an all round kitemaker and flyer of both single line and dual line kites. The second kitemaker is Peter Betancourt, a well known dual line specialist kite maker.

So, once again, sit back and enjoy reading about these kitemakers and seeing some of the wonderful kites they have made. 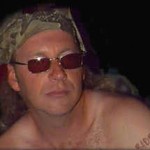 An insight into the man – Peter Betancourt as told to me by a close friend of his.

Peter Betancourt first discovered kiting as a child. The oldest of 4 brothers, his father used to take them to the New Jersey, USA shore for holidays where they would fly $2. Gala kites, using these ‘dime store’ deltas in battles often lasting the entire day. In 1990 Peter became re-acquainted with kites, rapidly becoming fascinated with dual line sport kites. Within a matter of months, he found himself taking his store bought kites apart, tweaking them to his own liking. It wasn’t long before his fellow flyers began asking him to build kites for them, launching his kite designing and building career. His newest kite, The Warrior, will be introduced in 1999, and will be the seventh design added to his ever-growing portfolio.

Peter’s continuous drive to design new kites, as well as his daily pursuit in developing new or better methods to tweak and improve past designs, is one of the reasons his kites have created a following among flyers seeking consistently high performance, lasting flight characteristics, outstanding construction and unique graphics. Each one of the kites Peter builds uses the finest of materials available, the craftsmanship apparent in every aspect of its execution. His designs have won awards a number of times and been glowingly reviewed in American Kite Magazine as well as other international publications.

An avid fan himself of single line kites using applique techniques, Peter has been inspired to create his own gallery of art kites using his signature series as the canvas. He has created limited edition kites using subjects such as the tiger, dragon and the cypress. His one of a kind kites have included tribal, celtic, native american as well as more traditional images. Each one of Peter’s art kites is a labor of love, and as he says, “made as if it’s for my best friend.” Each one of Peter’s kites, whether it be an art kite or one of the signature series, is carefully inspected, signed and photographed before being shipped. No kite leaves Peter’s studio without the feeling that he is bidding goodbye to his favorite child, wishing it good luck and a long life.

Peter’s holistic approach to kiting is not limited to his designing and building career. Not generally known, he’s a big old ham, and can be found almost daily flying with a hundred foot rainbow tail at beaches and parks around his home. “Flying my kites,” he remarks with a grin, “is one of the perks of the job.” A master’s class award winning competitor for a number of years, he’s now retired from the competition ring, solemnly stating, “I would rather fly for the zen of it” and to just show off, making one believe that is precisely what Peter does.

Watching him out there on the field, reminiscent of the Pied Piper, Peter whips his tail around teasing and taunting children and dogs. He’s never without the boombox, playing everything from New Age to Country Western, never locking himself into one mood. His flying style is very unique, and looks more like dancing than flying. Those who have observed his “fingertip control” are impressed, but if Peter is aware of it, he will state, “It’s the kites, man. Just the kites and the wind.”

One of the things that Peter loves best about kiting is entertaining at festivals and local events. He’s currently working on complete program which will include thematic routines, complete with special music. He can evoke everything from belly busting humor to romance with the flick of his wrist, and the music he’s selected. And he builds the kites to match. When asked who inspired this approach to kiting he quickly responds, “my family.” Peter’s family tree includes parents who build theatrical sets together, two uncles who are very successful artists and numerous relations who are active in the arts one way or another. Not well known, Peter himself is a graduate of the Culinary Institute of America and is a very accomplished chef. When asked these days, “what’s cooking” one doesn’t know if he will answer, “a new kite design” or “duck à l’orange”. He enjoys cooking for his friends as much as entertaining them, playing his guitar and singing.

Peter has many hobbies, besides kiting and tries to make time for them whenever he can. Besides travel, he loves to garden and create yard art; tinker around the house building better mousetraps; draw and read.

Peter is one of those lucky people who has integrated kiting into his life, enjoying the rewards it offers. The meditative qualities of flying and building kites is his key to success, which he defines as simply being happy. What could be better than that?

The replies to some of the questions I asked Peter :

Of the kites you have made, which is your favourite kite and why?

That’s like asking which one of your children do you love the best! Each one of my kites is a favorite in its own unique way. The BadBoy 2 is truly one of the most rewarding kites I’ve ever built, due to its ease of flight as well as its performance. The AM2 is a real trip, pulling like a workhorse, its precision is unmatched by any kite I’ve ever designed. The WyldChyld, and soon to be its mate, the Warrior, are more fun than a room full of puppies. The WindWhip 2 is a real lady, with lots of agility and finesse. The AerZero flies when nothing else will, with grace and power combined. By now you’ve figured out that this is really one of the hardest questions you’ve asked, but if I had to narrow it down to one kite, it would be “Farenheit”, the first art kite I ever made. She’s a constant reminder of where I came from and why I’m on this road to begin with. Sexy, charming, sultry, beckoning me to always be striving for the best. She’s my inspiration.

What style of kites do you make available and where can we get them?

Versions: All models (except the AerZero/Super UltraLite) come in standard, ultralite and vented.

SPECIAL NOTE: Peter is well known among kite collectors for his unique appliqué art kites, using the models listed above as the canvas. He has successfully merged the flight characteristics of competition dual line sport kites with the windborne beauty of single line kites.

Who is your favorite kite personality? Why?

Without hesitation, I would say Dave Gomberg. Why? Well, there are many reasons, but to put it into one single thought it would be, because of his dedication to kiting. This man, who by the way, is a real funny guy, has brought so much to our community. His grace and humor under fire, as well as his drive to educate, entertain and support all of us involved with kiting serves as a template for what we need more of in the United States and worldwide. He is what I consider the finest example of a goodwill ambassador, in any field, not just kiting.

Which is your favorite kite festival? Why?

Easy. Cervia Volante in Italy. Why? Great Food. Great People. Good Times. Fantastic Kites. The warmth and generosity of the Italian kiting community is so apparent, as is the great way they have the entire festival laid out. The vendors are not separated from the “action” as in many festivals. It’s possible to grab a cup of espresso, suck down some pasta and never leave the field. What can I say besides “FANTISIMO”. Oh, and the women are gorgeous too!

Who/what has had the most influence on you in your kite making?

The Flyers. Their input has been the most valuable tool I’ve ever used in defining any one of my designs. I build kites for flyers.

What award have you won that means the most to you?

What is your favorite kiting experience and why?

I wasn’t aware it has ended yet. Just kidding. Actually, that’s very close to the truth of how I feel. From the moment I bought my first stunt kite it has been a wonderful ongoing kiting experience and one I plan on continuing for the rest of my life.

If you were going to a festival for your own pleasure, what kites would you pack in your kite bag? (You may or may not actually own any or all of these kites) Kind of like a wish list of kites you would like to own and fly.

How big is the kite bag? And I still get to bring mine, right?

Unfortunately I don’t own any of the kites listed. Here they are, and not necessarily in the order of my obvious admiration for the builders of them:

5. An asst. of a dozen fighter kites including 4 each by Peter Lee, Stafford Wallace and Jeff Howard.

6. Any Kite by Peter Dolphin-although I’m partial to the Sun kite.

7. A ground display made by myself.

Thanks Peter it was really great to find out about you and your kites.