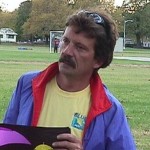 There is a certain symmetry to life that can lead to some excellent things happening. Over the last week, this symmetry has gifted me.

In early 1993, Vern Balodis, Al Hargus and I started a sportkite team, Captain Eddie’s Flying Circus. Shortly after we started, we recruited a new flier, Vicki Romanoff. We flew together for the next year and a half, having some good times, and some bumpy ones. Competition successes were few, but we found a lot of pleasure in simply flying together.

Early in ’95, Vicki and Al left the Circus. Our interests had become different enough that continuing on together made little sense. Several solid friendships took a body blow in the process. The Circus reformed with a new lineup, and Al and Vicki contested the ’95 season as “Sideshow”, doing very well in Pairs competition.

Captain Eddie’s had a mixed ’95 season, but ’96 saw the team start to gel. The season culminated with us winning Team Precision at the AKA Nationals in Santa Monica. Al and Vicki had joined forces with Rick and Robyne Gardner, forming team “Pair of Pairs”. They also had a successful season.

1997 was the Circus’ year. We were undefeated in US competition until the very last event of the season, and got to compete in the international event in Guadaloupe, and at World Cup. We won the AKC championships in Precision and Ballet, as well as the AKA crown in Precision.

After the season, Terry Thurston and John Barresi left the team, bowing to real-world pressures of jobs and families. This left the Circus in the position of not being able to defend the glories of the previous season.

As Mike and Vern sat on the sidelines, Al and Vicki took on a huge project for the ’98 season. They joined four other fliers to start a six-man team, “Shanti Air”. After many hours of hard work, they took on the challenges of the circuit to great effect. They qualified for World Cup, and won the AKC title in Ballet.

The stresses and strains of doing a long distance six-man team proved the undoing of Shanti Air. They had a final fly at the Cleveland Kite Festival, the week after World Cup.

Suddenly, Columbus had four seasoned team fliers sitting on the sidelines, pondering what to do with their weekends. Hey! Let’s recycle the Circus!! And that’s how this all started……

Vern Balodis, Al Hargus, Vicki Romanoff, and I will make up Captain Eddie’s Flying Circus for the ’99 season, and hopefully, for years to come. Since our split in ’95, it seems like we have been travelling in “parellel universes”, performing the same tasks and learning and growing along the way. It is so nice to be together again!

I guess you CAN go home again.

Watch for us on the circuit in ’99. It should be a good year for fans of team flying, with Bumperkites, Don’t Panic, Chicago Fire and Captain Eddie’s all planning a full campaign. Full speed ahead, damn the torpedoes, and may the best team win!