Of late, I realize that I’ve gotten away from the techniques used in indoor flying, so in this issue I’m going to go over one of the most popular of tricks, the 540 Flat Spin. If you have trouble doing the 540 outdoors, you will be very surprised how easy they can be indoors. Remember all that you have learned about the maneuver for outdoors. They really do work indoors.

In my experience with doing the 540 outdoors, it is necessary to give a little tug on one of the lines to actually get the kite to do the flat spin part. It is not necessary indoors. When you first try this, attempt the 540 about 8 feet off the floor. A little insurance. Bring the kite up and over. As the kite descends nose first toward the floor, keep both hands together starting at about shoulder level, arms extended out, and in one motion, bring your hands down in an arc toward your hips, then out toward the kite. As you extend out with your hands, stop with one hand and let the other create slack in the lines. The kite should come down, pick up speed, then go away from you belly down, nose away. As you stop with one hand and create slack with the other, the kite will go into a flat spin.

As the kite goes around, give slack to both lines. When the kite has just about completed the 540, slowly bring your hands back together and give a gentle pull to both lines to get the kite into a forward motion again. Easy. I was doing 540’s indoors long before I could do them outdoors.

Here are a couple of tips that I’ve picked up along the way.

For indoors, use the mini winders. They are less expensive then the standard winders and are perfect for those 10-15 foot line sets that we use for indoors. Most mini winders don’t come with a bungee to secure the lines once wound. What I do is take the winder, drill a small hole in one corner and attach my own bungee. I use to use rubber bands and while that certainly works, I had a problem with misplacing them once the line set was in use. The bungee idea is better in that the bungee can’t disappear very easy. I’ve seen mini winders from Invento/HQ and MLD and usually run around $2.00 US.

When I first started out, I hadn’t a clue as to how to keep quad lines separate. I use to take both lines from each side and larkshead them onto a match stick. Did a good job, but there is an easier way. Make sure that you tie an overhand knot about an 1/8-1/4 inch from the end of each loop at the end of your lines. Both ends. As you disconnect from the kite or handle, larkshead one loop onto the end knot on the other line. Then do the same to the other set. This keeps each side of the lines separate. Now, when you are ready to wind the lines onto the winder, run the joined ends onto the little peg thingy and put your index finger between each set. Then wind in the figure eight as normal. This keeps each side the line set separated as you wind and prevents twists. Try it. If you are a Deca flier, simply attach the kite ends only as mentioned. Join the handles together side by side and wind in a figure 8 on the handles. Marc Ricketts hates when I tell people this. He puts his handle opposite each other and winds them. Either way works.

Since KTAI is the hot topic, I should report on what I found with regards to indoor flying while there. That would be pretty darn easy to do since there were all of two kites that were introduced that qualify for the indoor category. Since there was no place to try these kites out while at KTAI, I can not even give you any review. Seems that indoor flying is still being treated as a fad by most manufacturers. One of the two that I did find is a dedicated indoor kite from Level One called the Amazing. The Amazing is designed by Paul de Bakker of Netherlands. 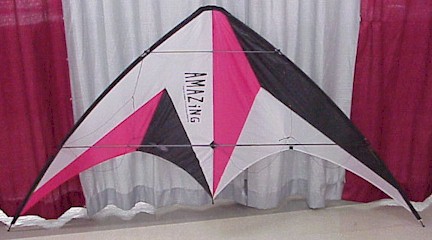 As I mentioned, there were no facilities to test any indoor kites while at KTAI Trade Show. I was able to fly the kite very briefly the following week at an indoor demonstration event in Hull, MA. By briefly, I mean no more than a few minutes. Not enough to give a review, but enough to know that the kite shows real promise for those serious about indoor flying. Perhaps by next issue I will have had a chance to try the kite for a bit longer.

The other kite was the Indoor/Outdoor manufactured by Eolo. I have not had an opportunity to try this kite. From initial reviews as seen on the Internet, the kite is living up to the purchaser’s expectations. There does seem to be some concern over the nose not being reinforced. This should be an easy fix. I remember the first PKC Wrens experiencing the same problem. I had to send mine back at least once. Now they all come with Kevlar reinforced noses. Eolo will probably do the same. I will also try to have more information on this kite as it becomes available.

The lack of indoor kites at KTAI’s Trade Show was a big disappointment. Even with the two kites that I previously mentioned, I’m told that unless there is a quick demand for the Amazing, it will be discontinued. Just as kite fliers around the world are embracing indoor kite flying, the manufacturers and designers are showing less interest. Instead of designing and building better indoor kites, the trend still seems to be going toward the compromise kite. The SUL. Not really a dedicated indoor kite, but one that can be flown outdoors in very light wind and still be more or less considered an indoor kite because of these light wind characteristics. What’s needed are true indoor kites.

While many of today’s indoor kites are excellent, there is still room for improvement and innovation. Just look at all the people who are building their own. And what about that single liner that can be flown the first time by anyone and still create that sense of excitement? Remember when you first flew outdoors and “got it”? We need a single line kite that can generate that feeling to anyone who tries it, the first time. I remember last season during an indoor demonstration, we tried getting children who had never flown a dual line kite outdoors to fly one indoors. It did not work very well at all. In fact, we probably created more frustration than any feeling of accomplishment. This year was different. This year Paul Berard brought out some indoor fighters and had the kids running around and at least feeling like they were flying a kite. The children had a good time and I was impressed by Paul’s efforts. I was very relieved that my Pi wouldn’t have to suffer any further nose landings.

We need to go further. So pay attention designers and manufacturers. There is a niche that no one is paying attention to. Build a simple single line indoor kite that requires no knowledge of kite flying, no running around and still sells for less than $30. It can be done. For heaven’s sake, we can build a dual liner like the Beetle, why not an equivalent for indoors? Call it the Moth or something.

In the last couple of months, two indoor competitions were held in the New England area. I understand that these were the only AKA sanctioned indoor events this year. By this I mean that they were events in themselves, not a part of other events. One was in Marblehead, MA and the other was in Newport, RI. These events deserve notice as they went outside the norm and split the event into categories. Dual Line, Quad Line and Open. Only the Open event was recognized by AKA for points awarded. This is because the AKA rules are still very broad.

The organizers of these events wanted to even up the odds for competitors. While this is truly a step in the right direction, I’m beginning to wonder if it’s not too little too late. More and more I’m hearing that the emphasis for any event will not be competition. With this happening, I doubt seriously that the Sport Kite Committee will look hard at changing the rules for indoor competition. While I do agree that there is too much attention put on competition, I do feel there is a place for it at events. Compare kite flying to any sport and while it’s true that people would like to get out there and “play”, the stands are still packed at competitions on an organized level. There is room for both.

Bottom line is that we still need change in the indoor area of Competition. The numbers are growing. I think if you give people the feeling that they actually have a chance to win, they will compete. Put in different experience level categories. Put in categories for dual and quad. And what about the folks who competed at these two events? Sure they got their scores recorded, but it doesn’t mean a thing for standings really. There is going to be an indoor competition at the AKA Nationals this year, but it will be Open. You need not have ever competed this season and you can show up and compete there. I haven’t been around kiting all that long, is that how it was done for outdoor competitions? Because it works at Wildwood, it’s good enough for the Nationals? What will possess a first timer to compete against the Curtiss Mitchell’s? The Sport Kite Committee really needs to look at indoor seriously.

Enough grumbling. There are still a couple of months left for indoor flying, at least in the northernmost sections of the hemisphere. Keep practicing and certainly keep sharing with others this wonderful little niche of kite flying. And remember, the fans are in the stands!