In 1899, Charles H. Duell, US Commissioner of Patents, urged President McKinley to close the US Patent Office. “Everything that can be invented has already been invented,” said Mr. Duell. Sorry Charlie, wrong-o.

Recently, I was involved in a late-night bull session with a group of kiters, when a similar idea was voiced.

“Most sportkites are basically rehashes of concepts at least three years old.”

“There’s not much more that you can do with a triangle”.

This discussion came back to me several days later. Can it be that the evolutionary process has stalled for kiting? Have we reached a hard boundary? Charles Darwin warned us that species that fail to evolve face extinction.

In this article, we will look at some technologies that may have a future in coming generations of kite development. These technologies exist now, and in most cases are readily accessible.

At the risk of sounding like a cheesy 1950’s “Popular Science” magazine article, here is a possible “Look at the Future.”

Since the very first kite was made, kites have been based on a “skin and bones” structure. A rigid frame supports a sail made of a flexible material, typically cloth, paper, or plastic. Over the years, the materials have become more performance-oriented, with framing materials become lighter and stiffer, and sailcloth becoming lighter, less porous, and more durable.

Top-level racing automobiles used similar structural themes from the 1900’s until the 1960’s, utilizing very lightweight bodywork over a frame constructed of rigid tubing. It was only then that a brilliant British team owner, Colin Chapman of Lotus, stole an idea that was just coming into fashion in aviation. Chapman and his engineers developed the first monocoque-chassised racing car, the Lotus 19. Rather than relying on a rigid frame, the car used a rigid, yet light body shell. The car was lighter and stiffer than any previous Formula 1 racing car, and went on to totally revolutionize the sport.

In aviation, the first monocoque planes were constructed of aluminum, recent high-end airplanes are constructed of carbon fiber. Similar strides were made in yachting, as well as race car design, as I mentioned earlier.

A monocoque structure can be incredibly strong and light. A complete Formula 1 “tub”, which includes the entire body/chassis assembly, weighs less than 80 pounds, yet can withstand a head-on impact with a wall at over 150 mph. (picture). Closer to home, when NASA was researching using the Rogallo wing as a re-entry vehicle for space capsules, they constructed several prototypes using monocoque technology. NASA was slightly ahead of the technology curve, as carbon fabrication was unknown at that point. 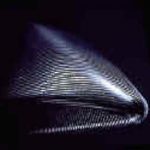 We believe that the potential exists to make an ultra-high performance kite from carbon fiber. This kite would be extremely rigid, yet very light in weight. There are design elements that could be utilized that simply don’t exist in present technology, such as air diffusers. These could be molded into the sail to alter the behavior of the “boundary layer” of air flowing over the back of a kitesail, to either increase lift, or to change the center of pressure of the sail, determining the flying characteristics.

Besides, big boys and girls need high-tech toys! How many people have shelled out major money for a “Beautiful Evil” or one of those Revolutions with the picture of a hooker?

The basic technology is deceptively simple. A “buck”, or mold, is constructed in the three-dimensional shape of the kitesail. A layer of carbon fiber cloth is laid over it, then painted with a resin to make it rigid. Depending on the needed strength, additional layers may be added. Ailerons, or other additional fins or stabilizers could be added. Once the resin is partially dry, the structure is put into an autoclave (see picture) for curing. An autoclave combines high heat with pressure to drive the resin into the carbon cloth on a molecular level, creating the incredible strength to weight ratio.

Cost would be a drawback, particularly in the prototype development stages. Bucks for carbon structures have typically been constructed from hardwood, with high-dollar craftsmen retained to make them. This cost could be reduced by using such materials as modeling clay to construct bucks for prototypes. Additionally, autoclaves are not cheap. An existing carbon shop would need to be hired to “cook” the sails.

The initial cost of developing this technology makes sportkiting an unlikely early user. Weather research vehicles would seem to be a good possibility, such as the ongoing kite-based weather studies that are being conducted in both polar regions. Cost and portability would not be insurmountable obstacles to using rigid kites for such research. Additionally, the additional durability of the monocoque kite would be advantageous.

That being said, if I hit the lottery, I know one project that I would bankroll…. the first Stealth Fighter Sportkite!

Coming in the next installment of Future Tech: Micro-electronics for kites