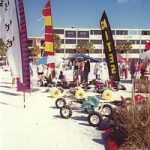 The Second Annual Treasure Island Stunt Kite Competition took place January 15th through the 17th in beautiful Treasure Island, Florida. I arrived Friday afternoon to find the festival already in full swing, well ahead of schedule. The long signature tails of several Jordan Airforms filling the sky made finding the festival a breeze. After checking in, I walked out onto the beach to the sight of Dean Jordan and hotel maintenance on the roof of the Bilmar hotel retrieving an airform that had been knocked out of the sky by another kite. I quickly found several flyers from the Treasure Island Sport Kite Klub (TISKK), which was there in force along with flyers escaping the severe winter storms from as far away as Oregon, Canada and points all across the Northeast. Many battled airport delays and snow packed roads in their quest for Treasure Island. The traveler’s endurance award goes to Brian and Terry from Quadrifoil in Canada who arrived mid-Saturday after driving through the night on snow & ice covered roads littered with overturned cards and jack-knifed tractor trailers. 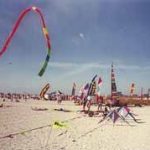 Saturday was the start of the competition and flyers had to deal with shifting winds starting from the East that, during the course of the day, swung a full 270° while oscillating from near zero to 10+ mph until finally ending up out of the North. Since I already took a shot at Dean for the kite on the roof (with tails in the palm trees), I suppose I should also note that when the wind died on Saturday, the only kite that stayed up was Dean’s big airform which withstood the lull (tails and all) while the other kites rained down on the beach. Dodd Gross brought an endless supply of his kites and a team of flyers that gave lessons to the public all day on the demo fields. As the sun set over the gulf, Dean Jordan was seen reeling in a delta of Gary Engvall’s to ensure that his airform was the last kite flying (cheater, cheater!). Unsatisfied after a brief victory dance, he then proceeded to land the huge Airform and its 100+ foot tails gracefully within feet of the hotel’s beach-side karaoke bar. Saturday night’s banquet gave everybody a chance to kick back and relax after a long day on the beach. Stretch Tucker served as emcee for the auction at which TISKK president Claxton Thomson seemingly bought every roll of spectra in sight.

On Sunday, the weather was picture perfect and winds were a steady 10+ mph off the water. Jeff Howard brought out the new kitesurf board he designed for Quadrifoil and Dean Jordan pulled out his 10m peel and they proceeded to draw quite a crowd as they surfed up and down the beach. Brian & Terry from Quadrifoil brought along their new X-series of traction foils and the new Peter Lynn kite boat. Local kitesurfer and TISKK member, Josh Young, was all smiles as he took advantage of the chance to try out all the latest toys.

Sunday afternoon’s action also included the Mayor’s Rokkaku Challenge in which nine local mayors competed in a Rokkaku fight. TISKK member Gary Resnick built five skull & crossbone adorned Roks for the battles which consisted of several preliminary heats with the three winners meeting in the finals. Colorful Treasure Island mayor Leon Atkinson won the battle, much to the delight and cheers of the home town crowd. From what I’ve heard since, the mayors had such a good time that they’ve issued a challenge to other mayors throughout the state of Florida. There is even talk of a challenge at the Miami festival in April (if sufficient bail can be raised to field a quorum of Miami-Dade county mayors).

Before I forget, there was a competition too. I’ll admit that I didn’t see a whole lot of it – I was having too much fun at the rest of the festival. Congratulations to all the competition flyers, but I’d especially like to recognize those who you hear about least, the novice category. Congratulations to Charles Stewart and Kurtis Jones who took first in the two novice events as well as the other novice competitors Harlan Groover and Andrew Riquelme. Hope we see you moving up the ladder soon! You can see the complete competition results on the AKA website.

Other miscellaneous items of note from the festival: Tim Elverson unveiled a slick tie-dye purple and lime green Jordan Air Pro built with fabric from Ty Billings. In and among the big show kites between competitions, Vince O’Brien was working some serious magic with his trick tail all weekend long. Dean put it best when he sarcastically remarked, “You better watch it or you’re going to get good at that thing.”

Congratulations and thanks to Sandy & Dirk at Kitesville USA, Tom Mason & the Eastern League, the Treasure Island Sport Kite Klub and the scores of volunteers that made this event a big success. See you again next year!