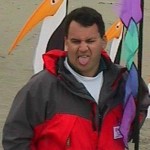 Fellow cheaters, this is to be my final column on the subject. I’ve taught you most of my secrets — not all, but most — and since I’ve finally moved up to Masters, and have nowhere to go but under Shane Snowden’s boot heel, it’s time to move on. But not before we learn to manipulate the scoring system for our own personal gain.

There are two scoring systems we’re dealing with here. The first is the American Kitefliers Association Sport Kite Conference system. It’s important to remember that this isn’t actually a scoring system, but a ranking system. In any conference, in any discipline, it determines who the top 3 fliers are. The top 3, of course, qualify to fly at the Grand Nationals. Since there are no seedings at Nationals, it doesn’t really matter whether you are #1 or #3 in the conference. So, our goal is simply to finish top 3, preferably with the least amount of work possible (cheaters are lazy). First, choose your conference carefully. There’s more to it than just geography. At the start of the season (August), you can declare that you want to be in a certain conference. To do this, just contact the appropriate sport kite conference commissioner and request that you be in that conference; if you don’t do this, it’s assumed that you’re in the conference where you live. The hitch is that you must compete in at least one event in whatever conference you choose. Take me, for example. I live in Iowa (Midwest Conference), but I’ve declared myself in the Central Conference for this year. Why? Well, for one, many of the Central’s events are just as far away from me as the Midwest events; I live conveniently in the middle of nowhere. Doesn’t matter if I go east or west to compete, does it? Sure does! The Midwest is top-heavy with really good Masters flyers: Jon Trennepohl, Jeff Cooper, Eric Wolff, Russ Faulk, Drew Davidson, Lam Hoac, Vern Balodis, basically, a lot of guys with big trophy cases. The Central has the aforementioned league-of-his-own Shane Snowden, then a few good flyers, but nobody truly great. In other words, there’s less competition in the Central, and the odds of a top 3 finish are better. No offense to those living there, but the Central and Southeast are probably the two weakest conferences, a lot of which is due simply to geography and the huge size of those conferences.

So, now I’ve established my goal of a top 3 finish in the Central Conference. (I’ve qualified for Nationals in the Midwest, Southeast, and Midwest again. If anyone has qualified in three different conferences, I’d like to hear about it.) Now I just have to go out and score points. Well, the first step is consistent mediocrity. Sure, you could do the easy thing and just win every event. But that means practicing a lot and making room in your suitcase for a lot of bulky trophies. I say, aim for 4th. At one point a few years ago, I had an amazing string of 14 consecutive 4th place finishes. No, you don’t win a lot of trophies, but you rack up plenty of points, more than someone who wins at one event and then crashes and burns at the next. And again, it’s a ranking system, so points matter, not places. At the past two Grand Nationals, I have four 6th place finishes in EIP and EIB; I challenge anyone else to attain that level of consistency.

A combination of wise conference selection and consistent mediocrity will almost always get you a bid to the Grand Nationals. You’ve gone all year showing off only your average stuff. October is the time to step it up and reveal the good stuff. Sure, 6th place is consistent, but it’s got a definite “kissing your sister” feel to it. For the big events, I recommend winning.

The second scoring system is American Kite Magazine’s Circuit. In 1998, I finished #1 on the Circuit in EIP and #2 in EIB, which earned me the Rising Star Award. But I’ll be the first to admit that I’m a weak ballet flyer. With my combination gimpy shoulder and busted elbow, I’m lucky if I can do a handful of axels before I have to break out the icepacks. All the z-axis, slack-lined tricks that people do nowadays are way beyond me. So I freely confess that Steve LaPorte, Lionel Gibbons, Dan Brown, and maybe even our own lovable Phil Napier are better flyers than I am. But folks, I know how to work the scoring system.

The Circuit lets you use your best five scores from the whole season, and two of those scores must be from regional events. There are six National events (double points), and one All-American event (triple points). I began 1998 at MASKC in Ocean City; it was a National, but I really went there because I think it’s one of the best run, most fun events going. And what do you know, I won. Big points. Next was Grand Haven, the All-American, which was in my home state at the time. I was mediocre, but with triple points, still scored well. Then came Kalamazoo, another National, also in my home state, and I won there. So in three events I scored megapoints, but I still hadn’t flown a regional. I had planned on competing in Topeka, because I suspected that there would be few competitors and thus easier to score. Unfortunately, job conflicts kept me home. The same logic applied to Bowling Green, but car trouble intervened. The first regional event I went to was South Bend, where I did fairly well. August brought me to Wichita, another National event, and since a lot of flyers had moved up from Experienced to Masters, I was competing against mostly people who had just arrived in Experienced from Intermediate, and I won both my events. Things were going good.

So I started thinking, hmmm, Steve already has an Academy Award to his name. Maybe he should leave the kite awards to us little people. Besides, I’m an unethical, heartless bastard. The AKA season was over, but because of the discrepency in their calendars, the Circuit was still going. I had chosen to remain in Experienced for a few more months. So I returned to my Detroit home for the MSKC in August, another regional. Remember, I needed another regional score. Precision went well, but a broken line in EIB netted me a big DQ, for 0 points. By then, I was keeping an eye on the Circuit website, checking the scores, cursing Darrin Skinner for not updating the results quickly enough, making mental calculations. I had a commanding lead in EIP, LaPorte was out in front of the EIB field by a long way, but if you added up both sets of scores, he was ahead in total points.

My final attempt to move up in the standings and get a final regional event score was the Showdown SKC in Oregon. The event was two days before the Grand Nationals in Ocean Shores, so it was convenient. I flew 1500 miles to get there, snapped a bridle on my opening move, and DQ’ed in under 20 seconds. How’s that for a turn of the karmic wheel. But… the Circuit takes your best five scores, not your first five scores. A strong EIP replaced a weaker finish earlier in the year, and that gave me a couple more points. Of the three regional events I flew at, I was disqualified from EIB at two of them, so one of my top five scores was, in fact, a zero.

But add it up, cheaters. By flying at the right events, knowing what places I had to finish in to improve on earlier scores, and paying attention to the competition, I won the Circuit.

And here’s the amusing part. Since I flew a few events in August, September, and October in the Experienced Class, I’m currently the #1 flyer in the AKA Central Conference EIP and EIB rankings. I don’t expect to hold onto that all year, but I could very well get a top 3 in those events. And since I’m now flying in Masters, I could also get the top 3 in MIP and MIB. Wouldn’t it be fun to fly all those events in Muncie? Would it be legal?

There’s nothing in the rulebook that says it isn’t, and that, my dear cheaters, is the name of the game.

Watch yourself, Napier. You’re mine in EIP this fall!