One For The Ages

At the end of a long, sluggish winter, there is nothing like a great kite event to awaken the mind and body to the endless possibilities of the better seasons to come. My inner doctor prescribed a large dose of sun and smooth breeze, to be taken with a sand chaser, in the company of a lot of friends. We turned the van toward Ocean City, Maryland in search of this therapeutic combination.

MIKE is another Sky Festivals production. Roger Chewning, assisted capably by a huge army of volunteers, has set the standard for successful kite event promotion in the US. Roger’s event experience is immense, with MIKE he went over the 100 mark. His expertise makes each festival top the last one….. this year’s MIKE was the best organized event I have ever attended, and served as the perfect capstone to the first National Kite Month. 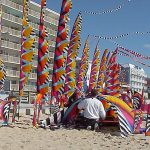 The pre-event buzz indicated that this was to be an event for the ages, and Mother Nature must have caught the buzz. Excluding a brief spit of rain on Friday night, the weather was beautiful. Gorgeous blue skies and fair winds enhanced our play and the enjoyment of the huge crowds.

The crew from Sky Festivals makes it a priority to have “something for everyone”, making their events ones to remember for entire families. The large weekend crowds in this resort town were drawn into the spirit of the festival by the three-ring circus of activities available throughout the weekend. The kid’s kitemaking tent was jam-packed, the learn-to-fly field created many new sportkite addicts, and the traditional parade to kick off Saturday’s activities made everyone on the boardwalk smile.

Was there a show for the huge crowd of vacationers to see? The answer is an emphatic YES! Over the four years of its existence, MIKE has stretched over an ever-larger expanse of beach, to the point that the show covered almost one mile of beach this year. It was ultimate fun watching the people, watching the show. Everywhere you looked on the boardwalk, there was a sea of upturned faces, all with big smiles, many of them pointing out their favorite kites. I kept thinking to myself, “This is what it’s all about”.

No matter where you looked, there was an aerial spectacle. The area is blessed with some of the most active kite clubs in the country, and they turned out in force for this event. The ripstop jungle on the ground was effectively combined with flying widgets and gizmos of every stripe.

If the area clubs made the stew, the contingent of guest fliers provided a tantalizing spiciness. Jack Roger’s large collection of giant kites set tongues wagging and fingers pointing, and David Gomberg outdid himself once again, unveiling two 50-foot bols. The scope of these monsters is deceptive, as was proven on Sunday afternoon. They had graced the beach for all of Sunday, when a sound like a pistol shot rang over the field. One of the observers pointed to the broken bridle line, shouting a warning just as the other bridle lines started breaking in sequence. There were some tense moments as a large crew collapsed the huge bol before it could tear free from its moorings and cover the boardwalk, power lines, and 10,000 people or so in a powerful storm of angry ripstop. A collective sigh of relief escaped from all who were aware.

Kicking back on the many boardwalk benches made for a placid afternoon’s enjoyment. When that got too monotonous, turning your gaze closer to the sand brought the macho elements of kiting into clear focus. Amid shouts of “Get Gomberg!”, followed by triumphant cries of “I Cut Gomberg!”, the Rokkaku battles ran through the sunny afternoon. Several vanquished contestants had to swim out into the 55 degree surf to retreive their fallen weapons, making the elation of the victors that much more visceral. If drawing blood is contrary to the rules, seeing your victim suffer from hypothermia must be a close second. In a miniature version of the death battle, the fighter kite fliers waged quiet, quickly-fought wars through the weekend. 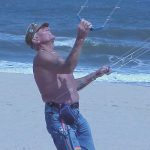 No large festival would be complete without the two ultimate kite crazies, Lee Sedgwick and Ray Bethell. Lee flew virtually nonstop, using his stack of Revolutions to great effect. Kids (of all ages) never tire of his antics, though I wonder how Leo the Lion feels after four million aerial drops onto the sand. Ray Bethell goes beyond crazy, and shoots right out into the cosmos of kiteflying fanatacism. His signature Kestrels, flying 100′ tails, seemed to never get a rest. When I am 73, as Ray is, I hope to be able to walk, and pee on my own, let alone fly 3 sportkites for twelve hours at a time. Ray is a truly remarkable man, and re-established his well-deserved celebrity again this weekend. I overheard Regis McCann of Nova Design Group remark to Roger Chewning, “Good thing you don’t pay Ray by the hour!”.

On Saturday morning, there was a brief period of quiet contemplation as friends of Mel Govig gathered on the beach to remember him, in a way that he would surely endorse. After a few brief eulogies, Mel’s ashes were lofted by a parafoil, and released to sprinkle over the ocean. Fly well, Mel.

In what may be a kiting first, even the banquet was magical! Sure, the food was not gourmet, but the zany fun that was had on the field continued on into the night. Normally, I find kite auctions to rank with watching grass grow on the excitement meter, but this one was *different*. Faced with over 80 items to auction in a short period of time, auctioneers David Gomberg and Jason Benedict magically transformed into a comedy team that combined the attributes of Redd Foxx, John Belushi,George Burns,and Minnie Pearl. Awards were given, along with numerous speeches. Unfortunately for the speechifiers, all of the speeches were given before the auction, providing the auctioneers the grist for their routine. No one was safe! I bet $10 that the Mayor of Ocean City thinks twice before attending next year’s banquet.

Presiding over all, like a proud papa, was Bill Osche, owner of the Kite Loft stores. Bill is one of the premier kite retailers in the country, and we were delighted to overhear him telling that “my store today (Saturday) did more in sales than it did the entire first year it was open!”. It is great to see people who have done so much for the sport enjoy success.

Long before this event became the large, one-size-fits-all extravaganza, it was known as MASKC. For serious sportkiters only, none others need apply. While the festival has grown around it, MASKC still succeeds as an event within an event, featuring close competition in many categories among contestants who crave a win at this prestigious early-season event.

Our coverage is not meant to be a blow-by-blow narrative, but a mention of the highlights as we saw them. Complete scores are listed below.

Masters Individual Ballet saw an incredibly close contest, with Bob Hurd, Rich Javens, and Scott Weider in a virtual photo finish. The quality of choreography among these three contestants was awesome, and I am damned glad I wasn’t charged with picking the winner.

Team events saw a mix of new and old faces taking the wins, with a newly-formed iteration of Captain Eddie’s Flying Circus starting the season on the right note. In Experienced class, Valli Girlz took the Precision honors, with a new team, Upgo, winning Ballet. Upgo is noteworthy for several reasons – they are a new team, they lost a member at the last minute to an ankle injury, and they gave the new “Prophecy” from Prism Designs its team baptism. Watch this team in the future.

On a down note, the depth of the sportkite field was rather thin, except for the Masters class. This is an ongoing trend, not specific to this event, and needs to be addressed strongly.

The organizers of MIKE set a new standard with this year’s event. Ocean City has truly moved into the ranks of the “must attend” events; you have to get there at least once in your kiting career. Combining the perfect blend of beach, sport, spectacle, and pleasant diversions, I know that this event will lure me back, again and again. Now, if we can only get Mother Nature to catch the same buzz again next year!